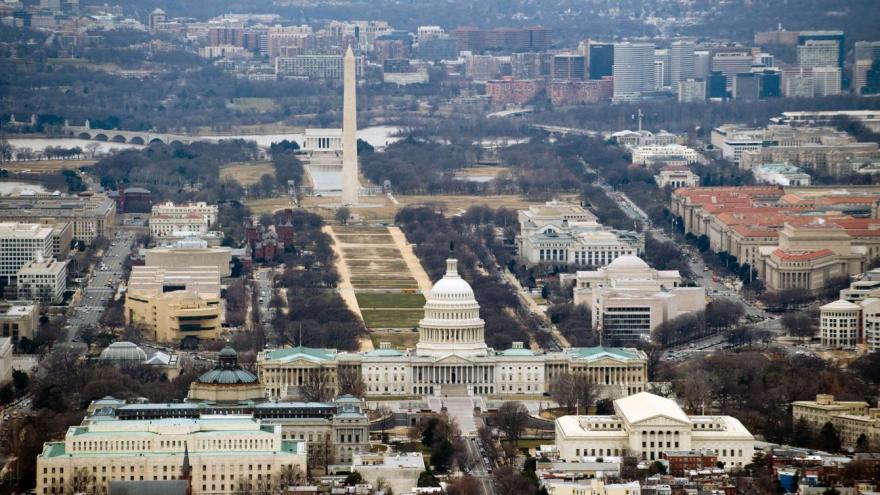 A group of bipartisan lawmakers is dedicated to getting a new memorial to honor military veterans of the global war on terrorism built in a place of prominence: the National Mall in Washington, DC, pictured here, on January 29, 2010.

(CNN) -- A group of bipartisan lawmakers is dedicated to getting a new memorial to honor military veterans of the global war on terrorism built in a place of prominence: the National Mall in Washington, DC.

Sen. Joni Ernst, a war on terror veteran who served in Iraq, is leading the effort in the Senate. The Iowa Republican said there is no better location for the memorial that would suitably honor and "show gratitude" to the veterans and those impacted by the decades of destructive terrorism than on the Mall near the nation's other iconic memorials for veterans of World War II, and the Korean and Vietnam Wars.

"Everyone knows about the global war on terror, and in some way or another every American has been impacted by it, and it goes to the level of significance" of why it should be on the Mall, Ernst told CNN, where the greatest number of people can come visit, reflect and say thank you.

"This is America's longest war, the notion that a memorial to it wouldn't be on the National Mall is just mind boggling," said Sen. Maggie Hassan, Democrat from New Hampshire and co-sponsor of a bill with Ernst that proposes three locations for the memorial on the Mall. Hassan, who sits on the Senate Committee on Veterans' Affairs, argued that the Mall needs this memorial in order to fully "reflect our history" and "our story."

The three spots proposed in the Global War on Terrorism Memorial Location Act include areas that "would be available on the National Mall," Ernst said, which includes Constitution Gardens close to the Vietnam Veterans Memorial, JFK Hockey Fields which is south of the Reflecting Pool and West Potomac Park, according to the bill.

Once a location is approved, the Global War On Terrorism Memorial Foundation will host a design competition where, according to the memorial's Executive Architects' website, "artists from around the country can submit designs that evoke the themes discovered, including those of endurance and sacrifice on a global and multi-cultural scale in America's longest war."

Lyn Schultes Franco, a spokesperson for the Global War on Terrorism Memorial Foundation, says a national competition is possible but has not been confirmed yet as the design process.

The Global War on Terror Memorial Act was signed into law in 2017 by then-President Donald Trump. The bill authorized the creation of the memorial on federal land in Washington, which is to be privately funded, but did not specifically designate where and when it would be built.

Lawmakers' latest push to get the monument built comes as the war in Afghanistan has finally come to a close and the recent twenty year anniversary of the 9/11 attacks, although the war on terrorism continues all around the world.

But despite the overwhelming bipartisan support for it, senators say a key obstacle to moving forward is a 2003 law called the Commemorative Works Act, which declared the National Mall complete and prohibited construction of new monuments or museums on the area. However, Congress can provide exemptions for the swath of land that runs from the Capitol Building to the Lincoln Memorial and beyond, like it did for the National Museum of African American History and Culture, which opened next to the Washington Monument in 2016.

On Monday, Ernst took to the Senate floor and asked for unanimous consent to pass her bill, but Sen. Joe Manchin objected. The West Virginia Democrat, who chairs the Senate Energy and Natural Resources Committee that oversees National Parks, monuments and memorials, said he is a strong supporter of the memorial. But he argued that constructing it on the Mall would "reopen the fight" to place other significant memorials there too, and suggested it should be built in compliance with the law, meaning someplace else.

"There have been several proposals to waive the prohibition of new memorials or museums in that area on the Mall including World War I memorial and the Desert Storm and Desert Shield Memorial," said Manchin, who backed the original bill to create the memorial with Ernst. "Ultimately, these were located in other high profile areas in compliance with the Commemorative Works Act. I believe this precedent would reopen the fight to locate other memorials on the National Mall and create more controversy that would ultimately delay the construction of this memorial, which is much needed."

Maine Sen. Angus King, an independent and chairman of the subcommittee on National Parks that held a hearing on the memorial location bill over the summer, told CNN he believes it will eventually end up on the Mall, but they need to "work with the National Park Service and find the right space."

Ernst said she expects the bill will eventually be taken up on the Senate floor and they'll keep "working towards a consensus." But she also noted her counterparts in the House are offering it as an amendment to the annual National Defense Authorization Act that will be voted on this week.

"It could be included in the House version and we'll see where that goes," she said, suggesting it might end up in the defense bill when the Senate passes it.