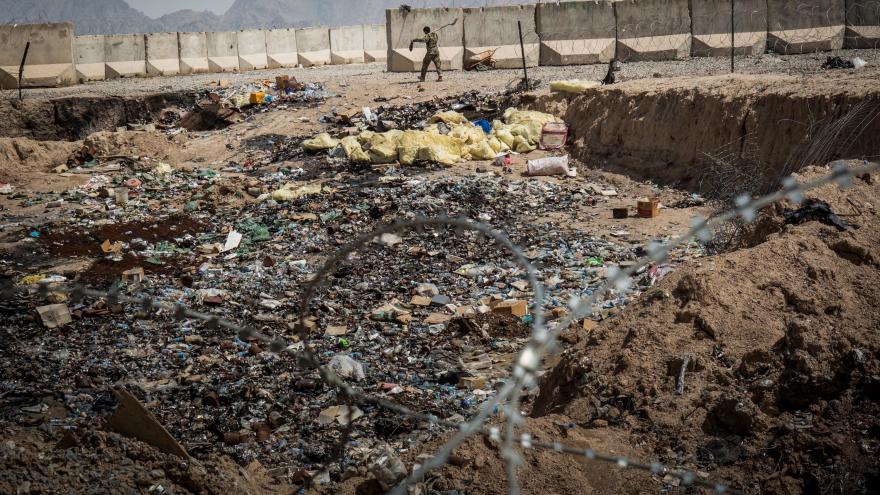 It's not yet clear though when burn pit legislation might get to the President's desk to be signed into law, and advocates say more still needs to be done for veterans to address the issue of toxic exposure.

Burn pits were used to incinerate and burn waste, hazardous material, and chemical compounds at military sites throughout Iraq and Afghanistan. A 2020 member survey by the advocacy organization Iraq and Afghanistan Veterans of America found that 86 percent of respondents were exposed to burn pits or other toxins.

Among other provisions, the bill would also require the Department of Veterans Affairs to implement clinical screenings for veterans to look for potential exposure to toxic substances and symptoms commonly associated with exposure.

The Senate bill had bipartisan backing and was introduced by Senate Veterans' Affairs Committee Chairman Jon Tester, a Montana Democrat, and the top Republican on the panel, Jerry Moran of Kansas.

The bill is the first part of a three-step, bipartisan approach the Senate Veterans' Affairs Committee is undertaking in an effort to address the issue of toxic exposure for veterans. The committee is currently working on the second phase of the effort with a goal of having it ready for Senate floor action in the coming months.

On the other side of the Capitol, Rep. Mark Takano, a California Democrat who chairs the House Veterans' Affairs Committee, has introduced a bill with bipartisan support called the Honoring our PACT Act that aims to improve health care and benefits for veterans exposed to toxic substances.

Among a range of provisions, the House bill would put in place "a presumption of service connection for 23 respiratory illnesses and cancers related to burn pits and airborne hazards exposure," according to a fact sheet from the House Veterans' Affairs Committee.

Since the House bill is not identical to the legislation passed by Senate, it is not yet clear what lawmakers will do to get a measure to the President's desk and the bills may need to be reconciled at some point in the future.

House Speaker Nancy Pelosi highlighted the House bill as an "important initiative" in a letter to House Democrats in January detailing the upcoming legislative agenda for the chamber.

After the Senate passed its bill this week, some advocates were quick to say more needs to be done.

Jeremy Butler, CEO of the group Iraq and Afghanistan Veterans of America, told CNN's Brianna Keilar this week, "The bill that just passed through the Senate basically does about a third of what we were asking for and unfortunately, that's because health care is expensive, benefits are expensive. But when you are sick and dying from rare cancers, that's what you need."

"This is a small first step," he said. "It moves the ball legislatively down the line, but it doesn't get to where we need as veteran's groups."

Tester and Moran celebrated the Senate bill's passage this week as one step closer to ensuring veterans get the benefits they need and deserve.

"This is a big bill, an important bill and it does right by our veterans in this country," said Tester ahead of the bill's passage on the Senate floor.

Moran added that he's heard from numerous veterans in his state and across the country who are sick or dying from the effects of toxic exposure caused by burn pits.

"Addressing the needs of veterans exposed to burn pits cannot wait. This legislation can be life-saving for those exposed or suffering," he said in a speech on the Senate floor.

"When our men and women in uniform go into harm's way on our behalf, we owe it to them to take care of them when they come home for whatever injuries are incurred during their service," he said.

Comedian and political commentator Jon Stewart, who has been a longtime advocate for 9/11 first responders and victims, has been a high-profile figure in the effort to get help for veterans who have been exposed to burn pits.

"The bottom line is our country exposed our own veterans to poison for years, and we knew about it, and we did not act with urgency and appropriateness," said Stewart last month at a virtual roundtable with the House Veterans' Affairs Committee. "And therefore, we've lost men and women who served this country. They've died out of our inaction."