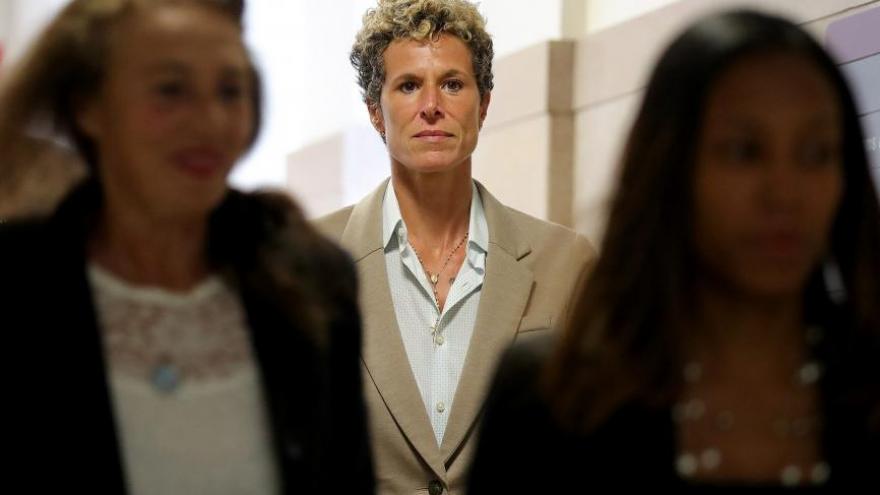 Andrea Constand and her attorneys said the decision to vacate Cosby's conviction is disappointing and discouraging to survivors of sexual assault. She is seen here in 2018.

(CNN) -- News of Bill Cosby's release from prison shocked many across the United States, especially his accusers.

Cosby was released after Pennsylvania's highest court overturned his sexual assault conviction, saying his due process rights were violated in the first major case of the #MeToo era. Cosby tweeted a photo of himself Wednesday night, thanking his supporters.

The reaction from accusers and their attorneys to Wednesday's announcement is in stark contrast to the elation many of them felt in 2018 when the comedian was found guilty of three counts of aggravated indecent assault for drugging and sexually assaulting Andrea Constand at his home in a Philadelphia suburb in 2004.

Here's what the women, along with their attorneys, had to say:

Constand was the central figure in Cosby's criminal trial three years ago. She testified that Cosby drugged and assaulted her at his home in 2004.

Constand and her attorneys said Wednesday's decision to vacate Cosby's conviction is disappointing and discouraging to survivors of sexual assault.

"Today's majority decision regarding Bill Cosby is not only disappointing but of concern in that it may discourage those who seek justice for sexual assault in the criminal justice system from reporting or participating in the prosecution of the assailant or may force a victim to choose between filing either a criminal or civil action."

Steuer accused Cosby of assaulting her in the late 1970s and says he offered to mentor her in her pursuit of a singing career.

She told CNN on Wednesday that Cosby's release makes her sad and that it's a loss for her as well as the other women who came forward.

"I'm comforted that we did the best we could because we came forward and told the truth. In the end that was the only power we had in this situation."

Steuer also said she was angry with the criminal justice system.

"I hope this won't discourage people. It is a discouraging message to sexual assault survivors," Steuer said. "I hope it won't because in the end all you can do is come forward and tell the truth."

Victoria Valentino accused Cosby of raping her in the 1960s.

"I am outraged! Outraged! Stunned! My stomach is in knots. The work that we have done to uplift women has been overturned by a legal glitch. We now have a serial predator on the street," she said.

Valentino said the announcement came out of left field and she described it as a gut punch.

"What does that say about a woman's worth? A woman's value? Do our lives mean nothing? All of the lives that he damaged, not to mention our children and how we respond to our children and our personal relationships. He's impacted the lives of well over 60 women."

Valentino went on to say that when Cosby's guilty verdict came three years ago, she and other accusers -- as well as victims of other powerful men, such as Harvey Weinstein -- felt vindicated.

"So here we are, back to square one," she said.

Janice Baker-Kinney accused Cosby of giving her pills and raping her in the 1980s.

She told CNN affiliate WPVI-TV it's taking her some time to absorb news of Cosby's release.

"I am stunned, I am shocked and my stomach is in a knot, ... One legal ease can overturn this when so many people came forward. ... This serial rapist gets to go home today is just stunning to me," she said.

Heidi Thomas, who has accused Cosby of drugging and sexually assaulting her in 1984 when she was an aspiring actress, says she feels "sucker punched" following his release from prison.

"I mean, I'm in a state of disbelief," Thomas told CNN's Erica Hill on New Day Thursday morning. "It's absolutely clear Cosby has always maintained his innocence because he does not understand that sexual assault and rape are crimes."

"It's devastating," Thomas said. "I think it takes so much courage to come forward in the first place. I'm terrified that people aren't going to come forward because they won't want to go through this."

Lisa Bloom told CNN's Ana Cabrera she is "disgusted and shocked" by the ruling.

"The jury heard all of the evidence, considered everything, convicted him, and now that this day has come I just think it's a slap in the face for all the victims," said Bloom, one of the attorneys.

"I'm glad he got some time served," she said, but it was only "a tiny, tiny measure of the justice that he should have received."

Bloom said she thought Wednesday was "going to be a very hard day. I think it's going to be a retriggering event for all of them who've testified that he had drugged and raped them."

She also tweeted and told CNN that Cosby's release shows the criminal justice system favors the rich and powerful.

"And it just goes to show, if you have money and power in the criminal justice system and you can afford attorneys to fight and fight for years and years, eventually you may find a loophole and a way to get a conviction overturned, and that's what's happened here," Bloom said.

In a statement obtained by CNN, attorney Gloria Allred said the following:

"This decision by the Pennsylvania Supreme Court today to overturn the conviction of Bill Cosby must be devastating for Bill Cosby's accusers. My heart especially goes out to those who bravely testified in both of his criminal cases. I represented a majority of the prior bad act accusers who testified. Despite the Pennsylvania Supreme Court's decision, this was an important fight for justice and even though the court overturned the conviction on technical grounds, it did not vindicate Bill Cosby's conduct and should not be interpreted as a statement or a finding that he did not engage in the acts of which he has been accused."