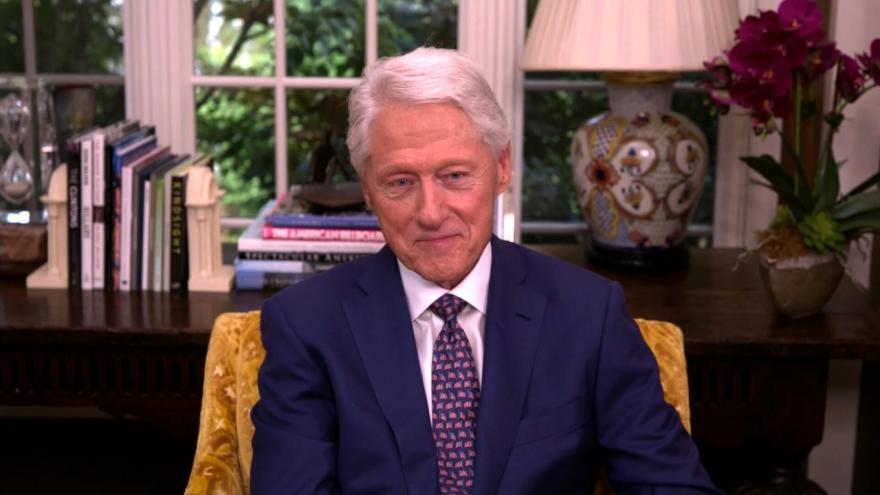 Former President Bill Clinton said it is "superficially hypocritical" for President Donald Trump and Senate Republicans to push to put a new justice on the Supreme Court before the November election.

(CNN) -- Former President Bill Clinton said Sunday it is "superficially hypocritical" for President Donald Trump and Senate Republicans to push to put a new justice on the Supreme Court before the November election.

"Well, of course, it's superficially hypocritical call, isn't it? I mean, (Senate Majority Leader) Mitch McConnell wouldn't give President (Barack) Obama's nominee, Merrick Garland, a hearing 10 months before the presidential election. And that meant we went a long time with eight judges on the court," Clinton told CNN's Jake Tapper on "State of the Union."

"This is what they do. I think that, you know, both for Sen. McConnell and President Trump, their first value is power and they're trying to jam the courts with as many ideological judges as they can," Clinton, a Democrat, added.

Trump and McConnell have said they want to quickly approve a new justice to fill the vacancy left by Ruth Bader Ginsburg, who died Friday at the age of 87. Many conservatives see the vacancy as an opportunity to fortify their majority on the nation's highest court, as Republican and Democratic congressional leaders brace for a showdown over the timing and speed of the nomination process in Washington.

Clinton appointed Ginsburg, a liberal icon, to the court in 1993.

As the Senate braces for the fight over Ginsburg's former seat, Democrats have blasted McConnell for blocking a vote on Garland in 2016 to fill the Supreme Court vacancy created by the death of Justice Antonin Scalia, even though then-President Barack Obama had nominated him in March of that year -- months before the presidential election.

Clinton told Tapper that should Republicans succeed in filling the vacancy, their efforts will "further spread cynicism in our system."

"To be fair, there is a case to be made for the argument McConnell made that in the middle of a presidential season, you should give the voters a say, that's what he said when it was 10 months away," Clinton said. "But when the shoe is on the other foot and he wants a judge, we're fewer than 50 days away and that argument doesn't cut any mustard. So ... it's going to further spread cynicism in our system and, you know, he said he wouldn't do it."

Vice President Mike Pence's chief of staff, Marc Short, told Tapper in an interview later on the program that Trump has an "obligation" to fill the vacancy, and told reporters after the appearance that he doesn't think it will take long for the White House to make an announcement regarding a nominee.

"We have 44 days between now and Election Day, so it's certainly within that timetable that it can be achieved," Short said of the timing of a Senate vote on Trump's forthcoming nominee.

Sen. Amy Klobuchar, who sits on the Senate Judiciary Committee, echoed Clinton's sentiments on "State of the Union," telling Tapper that Republicans' "rules" can't change depending on the president.

"As President Clinton said, you cannot have one set of rules for a Democratic president and another for the Republicans. They set this precedent. And they can't mess around and use raw political power right in the middle of an election," the Minnesota Democrat said.

Clinton on Sunday remembered Ginsburg as a legal expert who was able to put the human impact of her decisions first, a quality he says contributed to his decision to select her for a spot on the high court.

"She was disarmingly straightforward," he told Tapper. "We hadn't been talking but a couple minutes before I felt like we were just two friends having an honest conversation about American history, the Constitution and the law and how it affected real people."

"I was very, very determined that whoever I put on the court would be on the level and would see the people first. And understand the human impact, and she really did. She had this uncanny ability to be very much in the weeds, if you will, of the intellectual legal arguments and yet never lost sight of the human impact of her decisions," Clinton said.

This story has been updated with additional comments from former President Bill Clinton, Pence chief of staff Mark Short and Sen. Amy Klobuchar on "State of the Union."