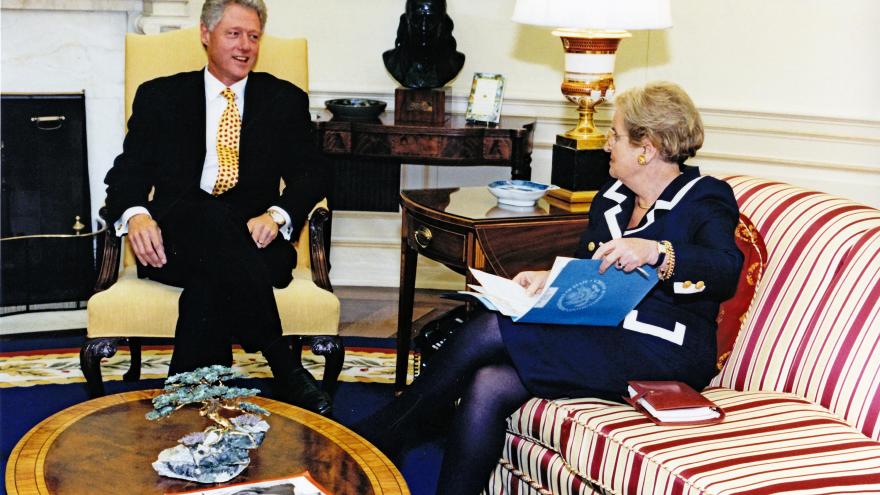 (CNN) -- Former President Bill Clinton paid tribute to former Secretary of State Madeleine Albright on Wednesday, saying the late former top diplomat was "a passionate force for freedom, democracy, and human rights" whose death "is an immense loss to the world in a time when we need the lessons of her life the most."

Albright, 84, died of cancer on Wednesday, her family said.

"Few leaders have been so perfectly suited for the times in which they served," Clinton said in a statement. "When the end of the Cold War ushered in a new era of global interdependence, she became America's voice at the UN, then took the helm at the State Department, where she was a passionate force for freedom, democracy, and human rights."

"Madeleine's passing is an immense loss to the world in a time when we need the lessons of her life the most," he continued, adding that both he and former first lady and Secretary of State Hillary Clinton "will always be deeply grateful for the wonderful friendship we shared and the unfailingly wise counsel she gave us over so many years."

Albright was a central figure in Clinton's administration, first serving as his US ambassador to the United Nations before he picked her to be the first woman secretary of state in his second term. In office, she championed the expansion of NATO, pushed for the alliance to intervene in the Balkans to stop genocide and ethnic cleansing, sought to reduce the spread of nuclear weapons, and championed human rights and democracy across the globe.

The former President noted Albright's lifelong commitment to public service, saying that "even until our last conversation just two weeks ago, she never lost her great sense of humor or her determination to go out with her boots on, supporting Ukraine in its fight to preserve freedom and democracy."

When Clinton nominated Albright to be his second secretary of state in 1996, he said the then-UN ambassador "embodies the best of America" and displays "determination to advance our interests around the world."

"It says something about our country, and about our new secretary of state designate, that a young girl raised in the shadow of Nazi aggression in Czechoslovakia can rise to the highest diplomatic office in America," he said at the time.

Former President George W. Bush also honored Albright on Wednesday, saying in a statement that he and former first lady Laura Bush are "heartbroken" by the death of the former secretary, whom they remembered as a diplomat "who understood firsthand the importance of free societies for peace in our world."

"She lived out the American dream and helped others realize it ... I respect her love of country and public service, and Laura and I are grateful to have called Madeline Albright our friend," Bush said.

And former President Barack Obama said Albright brought a "unique and important perspective" to a career in which she served as a "champion for democratic values." The former President also shared one of his favorite memories of Albright.