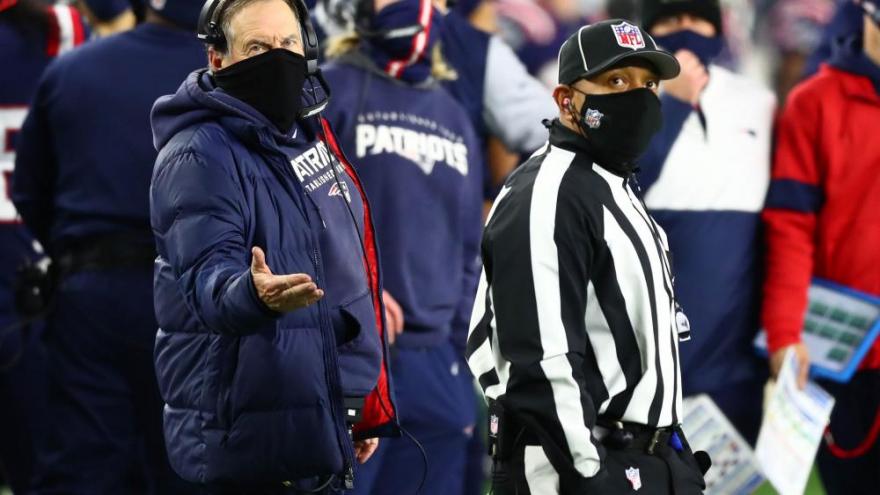 Bill Belichick said he was flattered but cannot accept the Presidential Medal of Freedom award.

(CNN) -- New England Patriots head coach Bill Belichick has announced that he is declining the Presidential Medal of Freedom, which he was scheduled to receive from President Donald Trump on Thursday.

Belichick cited the "tragic events of last week" as leading to his decision. Pro-Trump rioters rampaged in the US Capitol last Wednesday. Five people died as a result of the chaos, including a US Capitol Police officer. House Democrats want to impeach Trump, accusing him of "incitement of insurrection."

"Recently, I was offered the opportunity to receive the Presidential Medal of Freedom, which I was flattered by out of respect for what the honor represents and admiration for prior recipients," Belichick said in a statement. "Subsequently, the tragic events of last week occurred and the decision has been made not to move forward with the award. Above all, I am an American citizen with great reverence for our nation's values, freedom and democracy."

Belichick has been the Patriots' head coach since 2000 and has won six Super Bowls, a NFL record for a head coach.

In 2016, he wrote a letter of support to Trump. He told reporters after Trump gushed about the letter: "Our friendship goes back many years. Anybody who spends more than five minutes with me knows I'm not a political person. My comments are not politically motivated. I have a friendship with Donald."

Still, Belichick had faced repeated calls to decline the Presidential Medal of Freedom given the President's response to the US Capitol breach.

"This President has made a mockery of the Presidential Medal of Freedom," he said. "Look at who he is giving it to in the last weeks -- people like Devin Nunes and Jim Jordan -- I mean, please. Bill Belichick should do the right thing and say: 'No thanks.'"

Trump has often used the Medal of Freedom to reward his allies, whether they be financial, political or just old friends. Representatives Nunes and Jordan were two of the President's most vocal political allies who defended him throughout his impeachment.

Several people close to Trump have noted that, as his time in office comes to an end, one of the things he'll likely miss the most is not the work of the presidency but the trappings that come with it: the motorcades, rides on Marine One, tours of the Lincoln Bedroom given to dinner guests, a constant press corps at his side -- but also Medal of Freedom ceremonies.

Trump often delights in them and has done so for multiple friends, political donors and athletes over the last four years.

"One of the most rewarding things in my professional career took place in 2020 when, through the great leadership within our team, conversations about social justice, equality and human rights moved to the forefront and became actions," he said.

"Continuing those efforts while remaining true to the people, team and country I love outweigh the benefits of any individual award."