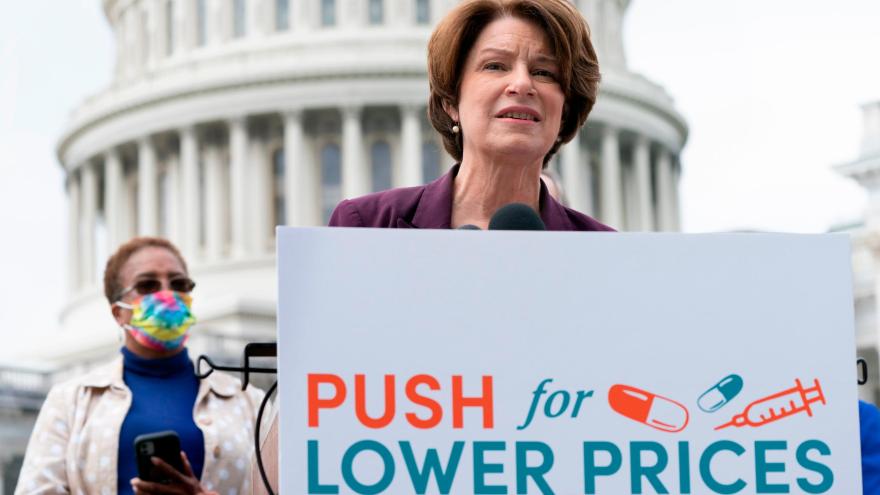 (CNN) -- With their once-sweeping budget reconciliation package whittled down to two health care measures, Senate Democrats are moving ahead with pushing the legislation through the chamber.

Another hurdle, however, remains, and it's not Sen. Joe Manchin, the West Virginia Democrat who has blocked his party from including climate, tax, social safety net and other provisions in the package.

Democratic leaders still need the blessing of the Senate parliamentarian to be able to approve the package via the reconciliation process, which would only require 50 Democratic votes for passage. To comply with reconciliation rules, all provisions of the package must have a direct impact on government spending or tax revenue.

The parliamentarian is scheduled Thursday to meet with both Democrats and Republicans to discuss the drug price provisions, the heftier of the two health care measures.

She must also review the other one, which would extend enhanced federal subsidies for Affordable Care Act coverage for two years. The details have yet to be finalized, but the effort is expected to be approved since the subsidies were initially beefed up in another reconciliation bill, the American Rescue Plan Act, last year.

It's unclear when the parliamentarian may rule.

Republicans are expected to argue that various aspects of the drug price provisions don't adhere to the reconciliation requirements, while Democrats will counter that they do.

Most of the bill applies directly to Medicare and its beneficiaries -- allowing the agency to negotiate the prices of certain expensive drugs, limiting how much enrollees have to pay out of pocket for medication at the pharmacy and penalizing drugmakers that raise the prices of drugs covered by Medicare faster than inflation. Experts expect these measures to gain approval since they all directly affect government spending.

But Democrats also want the inflation caps to take into account the price increases of drugs covered by private insurers in the employer and individual markets. This could run afoul of reconciliation rules, said Chris Condeluci, a health care legal and policy expert and former Republican aide to the Senate Finance Committee.

On the flip side, since the payments the drug manufacturers would have to make for exceeding inflation would go into Medicare's trust fund, an argument could be made that the provision would have a direct impact on government spending, he said.

"We'll just have to wait and see which argument carries the day," Condeluci said.

Already, Democrats have removed from the reconciliation package a popular measure to limit insulin prices to $35. The provision would have applied to the private insurance market as well as Medicare, and would likely not have passed muster with the parliamentarian.

Instead, they are focusing on a similar bipartisan effort being negotiated in the Senate, though it's unclear whether it will garner the 10 Republican votes needed for passage.

Medicare drug price negotiation: The bill would empower Medicare to negotiate prices of certain costly medications administered in doctors' offices or purchased at the pharmacy.

The Health and Human Services secretary would negotiate the prices of 10 drugs in 2026, and another 15 drugs in 2027 and again in 2028. The number would rise to 20 drugs a year for 2029 and beyond. Only medications that have been on the market for several years without competition are eligible.

This controversial provision is far more limited than the one House Democratic leaders have backed in the past. But it would open the door to fulfilling a long-standing party goal of allowing Medicare to use its heft to lower drug costs for the first time.

Limit on Medicare out-of-pocket drug costs: The bill would redesign Medicare's Part D drug plans so that seniors and people with disabilities wouldn't pay more than $2,000 a year for medication bought at the pharmacy.

It would also revamp Medicare's catastrophic drug coverage. Currently, after beneficiaries spend more than $7,050 out of pocket for medicine, they pay 5% of subsequent costs without limit. Medicare covers 80% and insurers pay 15%.

If the legislation is enacted, beneficiaries would have no out-of-pocket costs after they spend $2,000 on medication. Medicare would cover 20% for brand-name drugs and 40% for generic drugs. Insurers and manufacturers would be on the hook for the rest.

Inflation cap: The legislation would also require drug companies to pay rebates if they increase their prices in the Medicare and private-insurance markets faster than inflation.

Altogether, the drug price provisions would reduce the deficit by $288 billion over a decade, according to the Congressional Budget Office.

Also, the CBO found that the bill would not have a major impact on the number of new drugs being brought to market. About 15 fewer drugs would be introduced over the next 30 years, during which time an estimated 1,300 medications would be approved under current law, the CBO said.

Still, the pharmaceutical industry fiercely opposes the provisions, saying they will hurt consumers and drug development in the future.

"Democrats weakened protections for patient costs included in previous versions, while doubling down on sweeping government price-setting policies that will threaten patient access and future innovations," Debra DeShong, executive vice president of public affairs for the Pharmaceutical Research and Manufacturers of America, said in a statement earlier this month.

Democrats have long said that allowing Medicare to negotiate drug prices would greatly help lower the cost of medication, one of Americans' top health care headaches.

The bill could help reduce expenses for some Medicare beneficiaries -- particularly those who need very expensive medications -- since their out-of-pocket spending would be capped, said Juliette Cubanski, deputy director of the Program on Medicare Policy at the Kaiser Family Foundation, a nonpartisan research organization.

Allowing Medicare to negotiate the prices of some drugs would also help curtail costs, but the provision isn't taking effect for a few years, she said. Also, it won't apply to the newest and most expensive drugs.

"That's probably going to take a little bit longer to really translate into meaningful out-of-pocket savings for patients," she said.

But it would deliver substantial savings for Medicare over time, as the CBO score indicates, Cubanski added.

Plus, limiting drug price growth to the rate of inflation should curtail what Medicare beneficiaries pay at the pharmacy. It will help a much wider swath of Americans if the parliamentarian allows the measure to apply to commercial insurance coverage.

But more remains to be done, particularly further broadening the provisions to the commercial market.

"It is a historical step. Actual legislation that takes money out of pharma is a huge step," said Miller, who also served as executive director of the Medicare Payment Advisory Commission, an independent agency that works with Congress. But "it is decidedly incomplete."