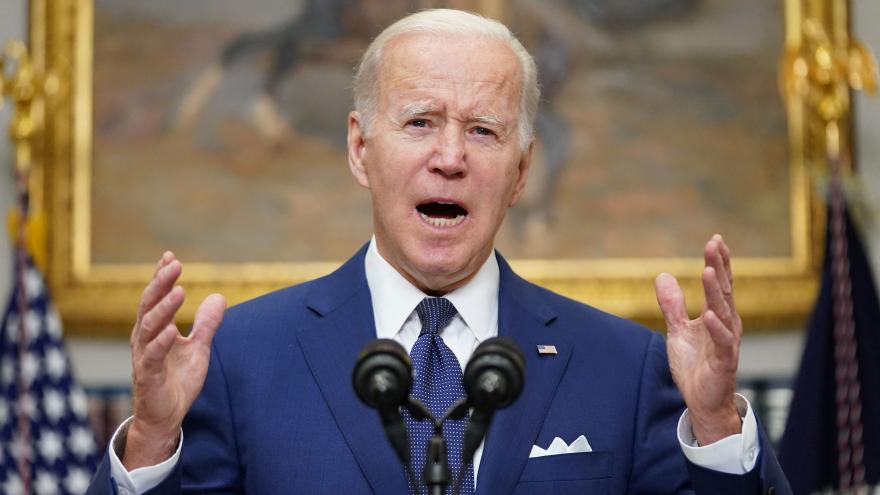 (CNN) -- President Joe Biden on Sunday faces the grimly familiar task of comforting families after another mass shooting, this time at an elementary school in Texas, as a weary nation grapples with an endless spate of gun violence.

Biden and first lady Jill Biden arrived mid-morning Sunday in Uvalde, Texas, where a gunman killed 19 students and two teachers last week. Their armored black limousine arrived to a makeshift memorial outside Robb Elementary School around 11:15 a.m. Central Time, pulling to a stop next to the sea of flowers, stuffed animals and photos that has grown since the day of the massacre.

The first lady carried a large bouquet of white roses to place in front of the brick Robb Elementary School sign. The Bidens, both dressed in somber black, stood quietly for a moment and the President made a sign of the cross.

After speaking with the school's principal and the superintendent of the Uvalde Consolidated Independent School District, Biden and the first lady walked to a row of memorial wreaths, each marking one of the children or teachers who were killed. They touched cardboard cutouts of each one, their photos on the front circled by white flowers, in quiet observation.

The White House said the President and first lady would meet community and religious leaders along with family members of the young victims during their visit.

They plan to attend Mass at Sacred Heart Catholic Church before spending the afternoon meeting the families. They'll also meet with first responders before returning to their home in Delaware.

"He hopes to convey empathy and understanding of what an impossibly horrible moment this is for them," one adviser traveling with the President said. "He hopes to offer some small piece of comfort, if that is possible."

It's a solemn task made more grueling by the serious failings of law enforcement who responded to Tuesday's shooting in Uvalde. And it comes without promise of major legislative action to prevent further carnage, though a bipartisan group of lawmakers have begun talks to identify areas of potential action.

The frustrations of an angry public could be felt at the memorial site. Some onlookers awaiting Biden began shouting when Texas Republican Gov. Greg Abbott arrived to accompany the President.

As Biden was departing, similar cries for help could be heard before he stepped into his vehicle.

A day before his visit, Biden spoke to the agony of the parents he would be meeting Sunday.

"I'll be heading to Uvalde, Texas, to speak to those families. As I speak, those parents are literally preparing to bury their children, in the United States of America, bury their children. There is too much violence, too much fear, too much grief," Biden told graduates Saturday at the University of Delaware commencement ceremony.

For Biden, the trip represents a somber duty to join grieving families in their darkest moments. He often draws upon his own experience of losing two children -- a young daughter to a car crash and his adult son to brain cancer -- to console fellow parents.

"To lose a child is like having a piece of your soul ripped away. There's a hollowness in your chest, and you feel like you're being sucked into it and never going to be able to get out. It's suffocating. And it's never quite the same," Biden said the night of the shooting, speaking from the Roosevelt Room shortly after returning from a two-country visit to Asia.

The Bidens' visit to Texas comes 12 days after the couple traveled to Buffalo, New York, to visit the site of a racist massacre at a grocery store. That shooting left 10 people dead. Vice President Kamala Harris traveled to the city on Saturday to attend the funeral for 86-year-old Ruth Whitfield, the oldest victim of the attack.

"This is a moment that requires all good people who are loving people to just say we will not stand for this. Enough is enough," Harris said before laying a bouquet at a memorial outside the Tops Friendly Markets store where the shooting occurred May 14. As she left, Harris issued a call to ban assault weapons like the ones used to kill in Uvalde and Buffalo.

The dual visits by the President and vice president to communities afflicted by mass murder were a striking reminder of the scourge of gun violence consuming the nation. Biden, who has spent much of his career working to enact stricter gun laws, again called for action this week.

But he stopped short of demanding Congress pass any specific bill; the White House says it is up to Democratic leaders in the Senate to determine how to proceed on potential legislation. And he hasn't named a gun violence task force beyond officials already inside the administration.

Biden and his aides also concede there is little more he can achieve through executive action that could prevent the types of massacres that now occur with gruesome frequency.

On Sunday, Sen. Dick Durbin, the chairman of the Senate Judiciary Committee, said he sensed a "different feeling," among his colleagues in Congress when it comes to the possibility of passing gun control measures in the wake of the Uvalde shooting. But the Illinois Democrat suggested to CNN's Dana Bash on "State of the Union" that if anything passed, it would be limited in scope due to to the need to compromise with Republicans.

In Texas, Biden will also confront harrowing accounts of the shooting that even state law enforcement officials said amounted to a failing by police. The decision by responding officers not to enter the classroom where the shooting occurred -- despite 911 calls from students pleading for help -- leaves open the question of whether some lives could have been saved.

The White House has said it will not prejudge an investigation into the actions of police. But the timeline disclosures, made Friday during a harrowing news conference in Uvalde, only add to the sense of anguish Biden will confront during his visit.