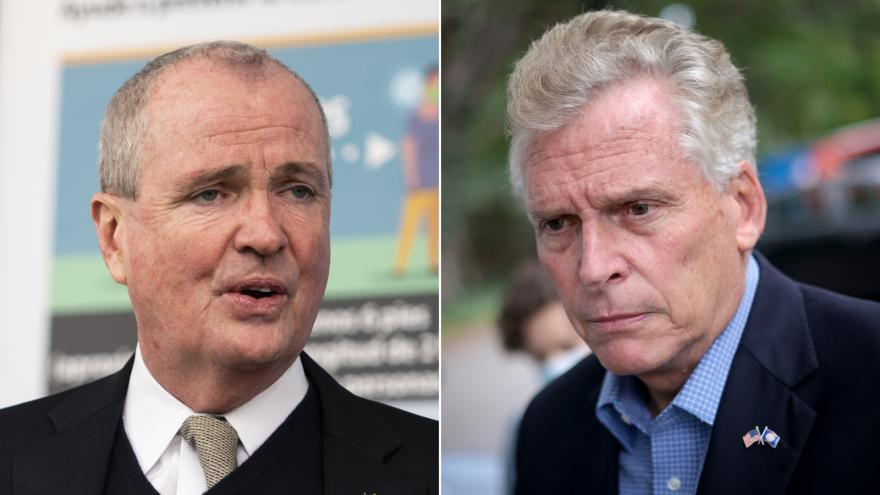 (CNN) -- The federal headwinds against Democrats on the ballot this November have never been stronger.

Democrats who were once buoyant that a well-liked President Joe Biden and popular agenda moving through Congress could propel the party to wins in 2021 are now worried that a trying few months for the President and sluggish poll numbers could impact people like Terry McAuliffe, the party's gubernatorial nominee in Virginia, and Phil Murphy, the incumbent governor running for reelection in New Jersey.

"If people don't wake up," said a Democratic operative working in Virginia, "we are in trouble."

The biggest concern is time.

The November elections are three weeks away and voters in the key races are already sending in ballots as Democrats in Washington are embroiled in chaotic and publicly messy negotiations over two bills on Capitol Hill: a $1 trillion infrastructure plan and a larger social spending bill. While Democrats are confident they can get the bills, in some form, passed, the likelihood that the end result comes before the November elections -- allowing Democrats to run on the bills -- is dwindling.

"It has been a tough month" for Biden and Democrats, Delaware Sen. Chris Coons, a Biden ally, said on Sunday.

Still, the drama on Capitol Hill is just part of the concerns around Biden. The worries among Democrats eying 2021 races began with the chaotic pullout of American troops from Afghanistan, a decision that, while popular with most American voters, was seen as haphazard and mishandled. Those fears continued to grow when two straight monthly job reports showed sluggish growth, threatening the party's ability to run on an economy rebounding from the economic devastation wrought by a coronavirus pandemic still ravaging the country.

"It is one of the key factors that we are monitoring," a top operative working on governors' races said of Biden's popularity. "The environment is one of the major concerns. And it's not just Biden. It is about Democrats looking like they can't get stuff done."

Biden's poll numbers, in response to the series of struggles, have ticked down in recent survey, though not at a precipitous clip. The CNN Poll of Polls, which averages the results of six recent public polls on the topic, found 45% of adults approve of the way Biden is handling his job as president, while 50% disapprove.

The biggest concern for Democrats with eyes on Virginia and New Jersey is how difficult it has been for their party, which narrowly controls both sides of the legislative body in Washington, to pass much at all. And Biden seems to have little urgency, too, telling reporters during the recent negotiations over his two spending bills that it "doesn't matter whether it's in six minutes, six days or six weeks, we're going to get" the bills passed.

If Congress is unable to pass anything ahead of this year's elections, the party risks being viewed as unable to govern in power, something voters could hold against Democrats on the ballot in November.

The concern is more pressing for McAuliffe in Virginia, where key voters are more attuned to the machinations of nearby Washington, DC, and polls show a tightening race against Republican gubernatorial nominee Glenn Youngkin.

The Republican candidate has tried to walk a fine line on tying McAuliffe to Biden -- an acknowledgement that even as Democrats struggle in Washington, the President did easily win the state less than a year ago. But Youngkin has taken opportunities to knock McAuliffe for Biden when he can. In the second and final gubernatorial debate last month, Youngkin accused McAuliffe of backing Biden's "failure of leadership," especially on the withdrawal from Afghanistan.

McAuliffe's response to Biden's slumping popularity has been scattered.

During the primary, McAuliffe ran fully behind Biden, regularly branding himself as the Biden Democrat in the primary field. But as the general election got underway and Biden's tough stretch begin, McAuliffe bluntly looked to distance himself from the President, noting "federal headwinds" in numerous interviews and making clear that he was dismayed by what was happening in Washington.

"I say: Do your job," McAuliffe told CNN when asked about his message to Democrats struggling to pass an infrastructure bill. "It's frustrating. ... Quit your little chitty chat, do your job and quit the posturing, quit going out and talking to the press all day. ... They've got to understand that they have a responsibility. Let's get it done."

The clearest attempt at this distance came during a video conference call earlier this month.

"The President is unpopular today, unfortunately, here in Virginia, so we have got to plow through," he said on the call with supporters.

Since then, however, McAuliffe has looked to walk back those comments, telling CNN's Dana Bash on "State of the Union" Sunday that Biden is "not dragging me down" and that his primary concern is getting an infrastructure bill passed.

And McAuliffe spokeswoman Christina Freundlich told CNN that their campaign "would be excited to welcome President Biden back to the commonwealth" ahead of the election.

McAuliffe's strategy, however, has done little to slow tightening polls. A Monmouth University poll released in late September noted that McAuliffe "maintains a small lead," taking 48% to Youngkin's 43% among registered voters, similar to their survey in August. A Fox News poll released around the same time found a similar split, with McAuliffe at 48% to Youngkin's 44%.

For Democratic candidates like McAuliffe and Murphy, it is impossible to put any distance between your candidacy and the Democratic President. Biden, for example, traveled to Virginia to campaign with McAuliffe in July.

By raising concerns about Biden's popularity, McAuliffe could be looking to gain the attention of Democratic voters, hoping the prospect of a struggling Biden helping elect a Republican governor of Virginia will get the party's base more engaged in the race.

"In an off-year election, it is critical to make sure that your voters know that the election is going to be close, that their vote matters and that the stakes are high," said Josh Schwerin, a political consultant who previously worked for McAuliffe in Virginia. "For that reason, it is important to have McAuliffe and his allies out there talking about the election and how close it will be and making sure we don't get complacent."

Schwerin added: "It is a state that the President won by 10 points, but it is not the same electorate as when he was on the ballot. And it is important (that voters) know that."

To boost Democratic engagement, McAuliffe has looked to turn Youngkin into a Trump understudy, regularly using his name and Trump's in the same sentence.

"My opponent is a Trump wannabe," McAuliffe regularly says, noting that the former President has endorsed him numerous times and that Youngkin has proudly accepted that endorsement.

This has turned the Virginia election into a test of whether invoking Trump without the former President being on the ballot will be effective when Washington is controlled by Democrats. The strategy worked in the failed California recall, with Democratic Gov. Gavin Newsom regularly tying his Republican opponent to the former President. But Virginia, despite a recent leftward tilt, is a far better test case of this strategy -- and its success or failure will have far reaching implications into the critical 2022 midterm elections.

'They have a close relationship'

The threat to Murphy in New Jersey is far less significant. Biden won the state in 2020 more comfortably than he did Virginia, and there are more than 1 million more Democrats than Republicans in the Garden State.

That means the party is more concerned about the margin, and less about whether Murphy will win reelection.

Murphy, like other Democrats across the country, has run by pledging to tackle the coronavirus pandemic in a responsible manner and tying Ciattarelli to Trump in a state the former President lost handily.

"Saying it's your call... on 'no masking' is akin to supporting drunk driving," Murphy told Ciattarelli at a late September debate. "We can't beat (coronavirus) that way." Ciattarelli hit Murphy for his handling of Hurricane Ida and stood by his opposition to vaccine mandates.

"Do I believe the government has the right to force you to take a medicine?" Ciattarelli asked rhetorically. "No, I don't."

Murphy has also been less open about how Biden is impacting his race, declining to detail the "federal headwinds" and Biden's slumping poll numbers like McAuliffe has.

The aide added: "We are happy to accept the President's support and campaign with him because he is popular in New Jersey and his agenda very much aligns with the governor."