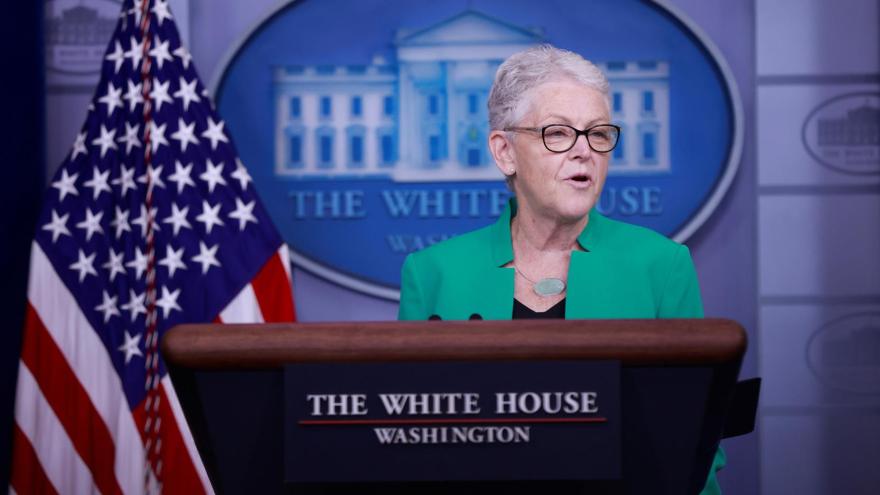 President Joe Biden will announce on September 2 that White House National Climate Advisor Gina McCarthy is leaving her post. McCarthy delivers remarks during a press briefing at the White House in April of 2021.

(CNN) -- The White House announced Friday that President Joe Biden has tapped John Podesta, a Democratic operative and campaign manager for Hillary Clinton's 2016 campaign, to serve as senior adviser to the President for Clean Energy Innovation and Implementation.

Podesta will be tasked with implementing the climate measures in Democrats' historic climate legislation, the Inflation Reduction Act, which Biden signed in August. He will also "chair the President's National Climate Task Force in support of this effort," the White House said in a statement.

"We are fortunate that John Podesta will lead our continued innovation and implementation," Biden said in a statement. "His deep roots in climate and clean energy policy and his experience at senior levels of government mean we can truly hit the ground running to take advantage of the massive clean energy opportunity in front of us."

Podesta also previously served as a top climate adviser to former President Barack Obama and was integrally involved in the administration's executive actions on climate and international negotiations that resulted in the Paris Climate Accord. Podesta has most recently been at liberal think tank the Center for American Progress, which he founded, and has been informally advising the Biden administration on climate issues.

The administration also announced Friday that White House National Climate Adviser Gina McCarthy is leaving her post. McCarthy -- one of two top climate officials appointed by Biden at the start of his administration -- had long been expected to stay in her position for about a year but continued for months beyond to help see through Democrats' historic climate legislation.

She will be succeeded by Ali Zaidi, the administration official said, who had been McCarthy's deputy since the start of the Biden administration. Biden's other top climate official, US Climate Envoy John Kerry, is expected to stay in his post through the UN climate summit this fall.

Biden praised McCarthy and Zaidi for their work.

"I am immensely grateful for Gina's service, and I am proud to announce the promotion of Ali to National Climate Advisor," Biden said in a statement. "Gina has been an invaluable member of my senior staff since day 1 of the Administration, and I wish her the best as she moves forward."

McCarthy was the head of the Environmental Protection Agency under former President Barack Obama and was a key architect of that administration's Clean Power Plan. In the Biden administration, McCarthy was tasked with setting up a first-of-its-kind White House office to coordinate climate action across agencies.

"Her legacy is going to be that she set up the president and the fed government for the most aggressive climate action in the history of the US," said Christy Goldfuss, senior vice president for energy and environment policy at the Center for American Progress. "All of that will be what she's most proud of and most remembered for. Those positions will stick around, and the structure she helped drive will be needed long into the future."

As much as McCarthy greased the wheels for climate action across agencies, the White House's most significant win on climate came through Congress last month in the Inflation Reduction Act, which contains $370 billion in new clean energy tax credits and climate provisions -- a historic amount of climate spending and the most significant environmental legislation since the landmark Clean Air Act.

As the Biden White House has pursued a largely legislative climate strategy, McCarthy did not play a large role in the Congressional negotiations, multiple lawmakers told CNN. In the end, Senate Majority Leader Chuck Schumer played the largest role in final negotiations with Sen. Joe Manchin of West Virginia that produced a surprise, eleventh-hour climate bill.

Throughout a year of stop and start negotiations preceding the bill's passage, lawmakers said McCarthy was largely focused on guiding executive actions and agency regulations. She had regular check-ins with Senate climate hawks to keep them apprised of climate-focused executive actions, Sen. Tina Smith of Minnesota told CNN.

"I think that has been her sweet spot; more on the executive action side rather than the negotiations with Congress side," Smith said.