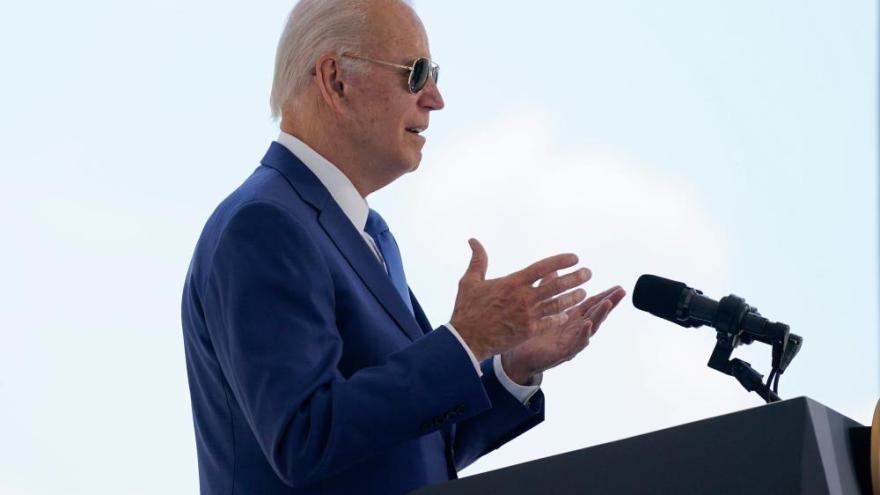 President Joe Biden and first lady Jill Biden on August 8 are scheduled to travel to eastern Kentucky, where deadly flooding killed more than three dozen people and caused catastrophic damage to communities. Biden is seen here at the White House on August 5.

The President was joined by Kentucky Democratic Gov. Andy Beshear and received a briefing on the ongoing response efforts to the flooding.

"It's going to take a while to get through this but I promise you we're not leaving. The federal government and all its resources -- we're not leaving," Biden said during the briefing, which took place at an elementary school in Lost Creek. "As long as it takes, we're going to be here."

First lady Jill Biden also traveled to Kentucky with the President. Along with Beshear, Biden was also accompanied by several Kentucky elected officials during his trip, including Kentucky Republican Rep. Hal Rogers. Biden said that he had invited Senate Minority Leader Mitch McConnell to Kentucky, but McConnell did not come.

When asked by CNN if he wished the Kentucky senator had joined him, Biden responded: "No, I don't think so. I don't think he has to. He's got a Senate to run."

Thousands remain displaced after the flooding swept away entire homes. Many also remain stranded without access to clean water, electricity and critical supplies, as some communities remain impossible to access because of heavily damaged infrastructure. High temperatures, thunderstorms and humidity have been posing challenges to response efforts.

After surveying damage and meeting with families affected by the flooding, the President praised the local community for their "courage" and "stamina."

"We're the only country in the world that has come out of every major disaster stronger than we went into it. We got clobbered going in but we came out stronger. That's the objective here," Biden said.

He continued, telling the group as they were surrounded by devastation from the floods, "So I don't want any Kentuckian telling me, 'You don't have to do this for me.' Oh, yeah we do. You're an American citizen. We never give up, we never stop, we never bow, we never bend -- we just go forward. And that's what we're going to do here."

Biden on Sunday made additional disaster assistance available to Kentucky after initially approving a disaster declaration on July 29 to supplement local recovery efforts with federal funding.

Monday's trip took place shortly after Biden was officially cleared to emerge from isolation after recovering from a rebound case of Covid-19. The President had spent 18 days at the White House because of two back-to-back cases of Covid-19, but then traveled to Rehoboth, Delaware, on Sunday. He tested negative on Saturday but remained in isolation until testing negative again on Sunday.

The trip came the day after the Senate passed a $750 billion health care, tax and climate bill, in a significant victory for Biden and his party.

The massive bill -- named the Inflation Reduction Act -- would represent the largest climate investment in US history and make major changes to health policy by giving Medicare the power for the first time to negotiate the prices of certain prescription drugs and extending expiring health care subsidies for three years. The legislation would reduce the deficit, be paid for through new taxes -- including a 15% minimum tax on large corporations and a 1% tax on stock buybacks -- and boost the Internal Revenue Service's ability to collect. The legislation still needs to pass the House of Representatives.