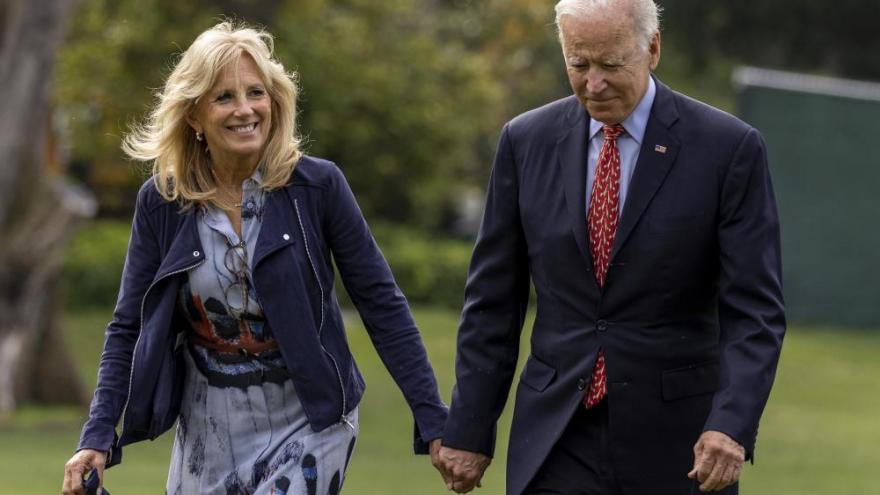 The Bidens are expected this week to revive a longstanding Thanksgiving family tradition that goes back to 1975, opting to spend this year's dinner in Nantucket, Massachusetts. U.S. President Joe Biden and U.S. First Lady Jill Biden walk on the South Lawn of the White House in Washington, D.C., U.S., on Monday, Oct. 4, 2021.

(CNN) -- The Bidens are expected this week to revive a longstanding Thanksgiving family tradition that goes back to 1975, opting to spend this year's dinner in Nantucket, Massachusetts.

In his 2017 memoir, " Promise Me, Dad," Biden wrote that Thanksgiving was the first holiday he and his now-wife Jill spent together.

The couple, and Biden's two young boys Hunter and Beau, had several invitations for Thanksgiving at the time. But Biden realized that "no matter which family we chose (to spend the holiday with), we were going to hurt somebody's feelings, which was the last thing either Jill or I wanted to do."

"I was in my Senate office one day that fall, explaining this predicament to my chief of staff, and he said, 'What you need is a nuclear Thanksgiving.' Meaning the nuclear family alone. Only Wes Barthelmes was a Boston guy, so what he actually said was 'nucle-aah Thanksgiving,'" Biden wrote.

"I wasn't sure what exactly he was trying to say, until he explained it might be easiest on everybody if the four of us -- me and Jill, Beau and Hunt -- went away alone. He suggested the island of Nantucket, which was an hour by ferry south of Cape Cod. Neither Jill nor I had ever been there, but we decided to go ahead and make an adventure of it."

And so a new family tradition began -- and will continue Tuesday when now-President Biden and the first lady head to the island. They were slated to leave on Tuesday night after serving Thanksgiving meals at a local Washington, DC, non-profit organization with Chef Jose Andres.

The original group of four has expanded to include the Biden spouses and grandchildren. And over the years, the family has been spotted at local holiday events, including participating in Turkey Trots, the town's Christmas tree lighting ceremony and the Cold Turkey Plunge.

Whether it's a great year or a lousy year, Biden wrote in "Promise Me, Dad," "we put it all aside and celebrated Thanksgiving in Nantucket." That annual trek to Massachusetts, he said, has been "a constant in our grandchildren's lives from the time they were aware, and they made it clear how much it meant to them."

That tradition didn't stop when Biden became vice president during the Obama administration. But instead of a long drive north, the second family traveled via Air Force Two.

The family opted not to visit Nantucket for Thanksgiving in 2015, which took place about six months after Beau Biden died. Instead, then-second lady Jill Biden opted to take the family to Rome for the holiday.

Along with the many Biden family traditions that took place on Nantucket (like taking a family photo each year at a Sconset beach house that was swept away in recent years), Beau proposed to his future wife at the town's 2001 Christmas tree lighting and married her at a downtown church.

The President also wrote in his memoir that as Beau's health was becoming reason for concern, his sons used a Nantucket trip to urge him to run for president in 2016.

"I knew there were plenty of good reasons not to run, and uncertainty about Beau's health was at the top. And I really suspected that my sons, whose judgments I had come to value and rely on, did not want me to put the family through the ordeal of a presidential campaign just now," Biden wrote.

"'Dad, you've got it all wrong,' Beau said when we settled down in the kitchen in Nantucket. 'You've got to run. I want you to run.' Hunter agreed: 'We want you to run,'" he continued.

In 2020, the Biden family also opted not to visit Nantucket for large family gathering on Thanksgiving because of the ongoing Covid-19 pandemic. Instead, he and his wife spent the holiday at their home near Rehoboth Beach in Delaware with their daughter, Ashley, and son-in-law Howard Krein.

"Last Thanksgiving, for the first time, it was just four of us -- my wife and I, our daughter and my son-in-law," he said earlier in November. "Later this month, our tables and our hearts are going to be filled, thanks to the vaccines."

Despite the yearly visits, Biden does not own a home on the island. It's not clear where the family will stay.

The presidential visit is expected to have a large security footprint, but so far, local authorities largely appear unfazed by the high-profile arrival.

Tom Rafter, who oversees operations at the Nantucket Memorial Airport, told the Boston Globe that each of his 34 full-time employees will be on hand next week to welcome Air Force One.

But he added, "I mean, we've have the Kardashians visit in the past, so the island is used to this type of thing."

In celebration of Thanksgiving this week, the President and the first lady visited military service members and their families at Fort Bragg in North Carolina.

And before their departure to Massachusetts, the President and the first lady will participate in a service project on Tuesday in Washington, DC, alongside the second family.