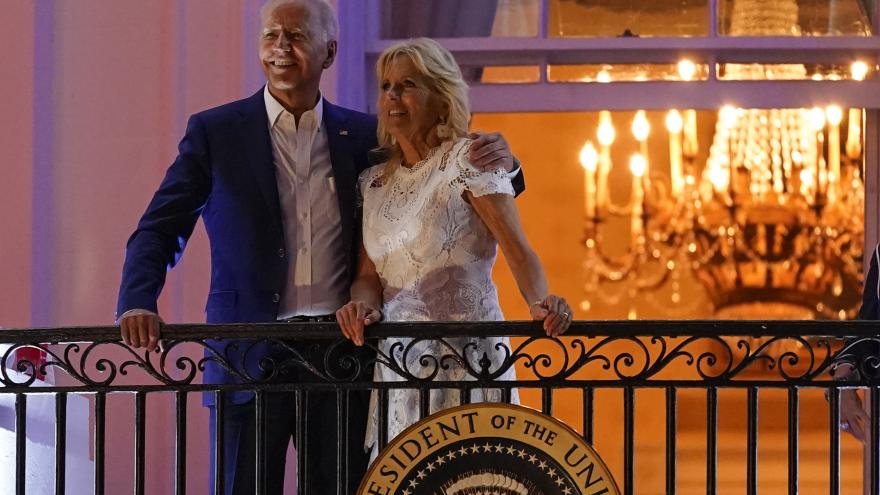 (CNN) -- President Joe Biden began Independence Day by sharing a message that looked to the country's future, but quickly had to respond to another mass shooting in the US.

"Jill and I are shocked by the senseless gun violence that has yet again brought grief to an American community on this Independence Day," the President said in a statement after at least six people were killed in a shooting in Highland Park, Illinois, during a July Fourth parade.

Biden noted that he had "surged Federal law enforcement to assist in the urgent search for the shooter, who remains at large at this time," and pointed to the gun safety legislation he recently signed into law. "But there is much more work to do, and I'm not going to give up fighting the epidemic of gun violence," he added.

Biden, who had spent the morning at Camp David, returned to the White House Monday afternoon. He's expected to deliver remarks commemorating the holiday at a celebration with military families on the South Lawn.

Earlier in the day, he had released a forward-looking statement about how the "best days still lie ahead."

"The Fourth of July is a sacred day in our country -- it's a time to celebrate the goodness of our nation, the only nation on Earth founded based on an idea: that all people are created equal," Biden said in a tweet. "Make no mistake, our best days still lie ahead."

The July Fourth holiday comes amid a challenging time for the nation marked by deepening division, inflation and a recent set of polling showing that the vast majority of Americans across party lines are unhappy with the state of the US.

In an AP-NORC survey released last week, 85% of US adults say that things in the country are headed in the wrong direction, with just 14% believing things are going in the right direction. That's a more pessimistic reading than in May, when 78% said things were headed the wrong way and 21% that things were generally moving in the right direction. And currently, both 92% of Republicans and 78% of Democrats are dissatisfied with the direction of the country -- the highest number among Democrats since Biden took office last year.