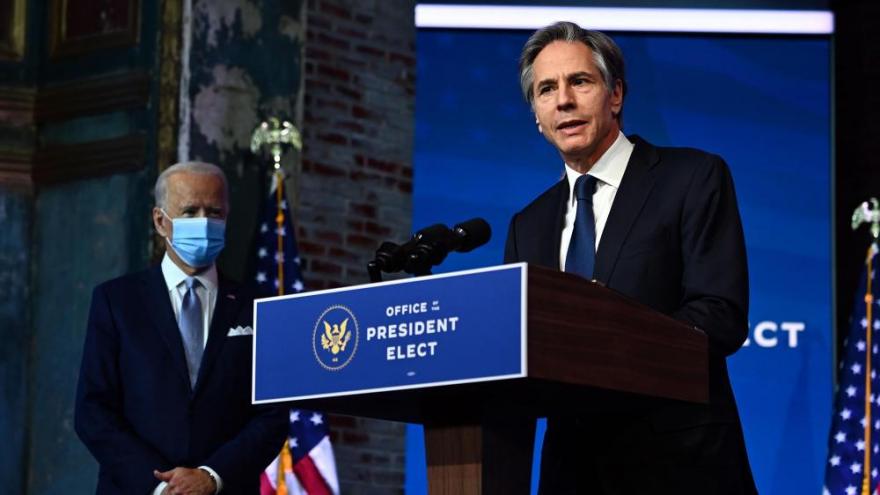 Antony Blinken speaks during a cabinet announcement event in Wilmington, Delaware, on November 24, 2020. Blinken said that he plans to swiftly appoint an LGBTI envoy, allow embassies to fly the pride flag and formally repudiate the findings of the controversial "Commission on Unalienable Rights."

(CNN) -- Antony Blinken, President-elect Joe Biden's pick to lead the State Department, said Tuesday that he plans to swiftly appoint an LGBTI envoy, allow embassies to fly the pride flag and formally repudiate the findings of the controversial "Commission on Unalienable Rights."

Taken together, Blinken's comments during his confirmation hearing before the Senate Foreign Relations Committee signal a clear departure from the Trump administration's approach to LGBTQI protections as Biden looks to usher in a new era of equality.

While the position of special envoy for the human rights of LGBTI persons was left vacant under the Trump administration, Blinken said Tuesday that appointing someone to the role is "a matter, I think, of some real urgency."

"We've seen violence directed against LGBTQI people around the world increase. We've seen, I believe, the highest number of murders of transgender people, particularly women of color, that we've seen ever," Blinken said.

"And so I think the United States playing the role that it should be playing in standing up for and defending the rights of LGBTQI people is something that the Department is going to take on and take on immediately."

Blinken also said he would allow US embassies to fly the pride flag. CNN reported in 2019 that multiple US embassies had been denied permission by the Trump administration to fly the rainbow flag to commemorate LBGTQ Pride Month.

He similarly committed to repudiating the findings of Secretary of State Mike Pompeo's keystone initiative,The Commission on Unalienable Rights, which contended in its report that some rights were not worth defending.

The Trump administration for years has reversed, dropped, removed and withdrawn established LGBTQI protections and has been particularly hostile toward transgender Americans.

Among its most criticized moves was an effort last year to roll back an Obama-era regulation prohibiting discrimination in health care against patients who are transgender. A federal judge blocked the repeal over the summer, ruling it had violated a recent Supreme Court decision.

Blinken also sought to make clear Tuesday that he plans to emphatically redirect the trajectory of US foreign policy after four years of the Trump administration, rebuilding and reengaging alliances to confront transnational threats ranging from Russia and North Korea to climate change.

If confirmed, Blinken said, he aims to reengage with Congress in a bipartisan fashion, an implicit criticism of his predecessor's combative relationship with some lawmakers.