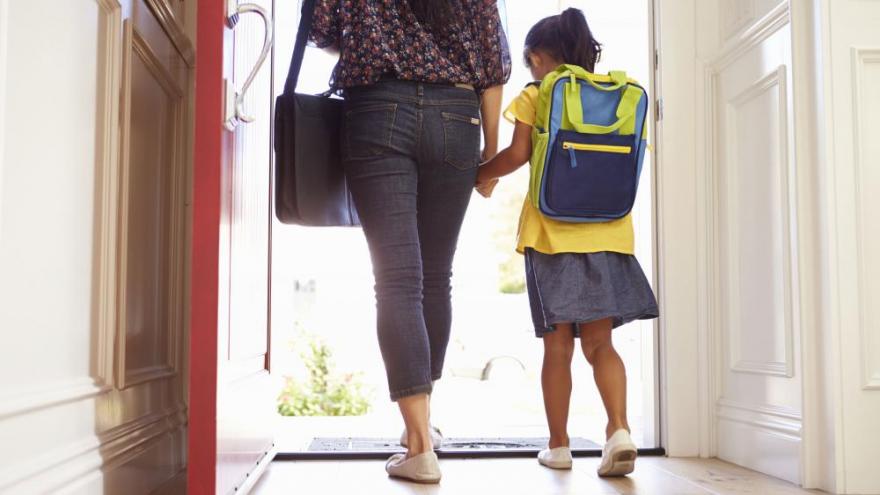 (CNN) -- President Joe Biden's ambitious plan to send families with kids thousands more dollars starting in July could slash child poverty in half -- but only if the federal government can successfully deliver the money to all eligible households.

While the vast majority of eligible families will receive the monthly payments automatically, very low-income households who fall below the income threshold that requires people to file federal taxes will likely have to submit some information to the Internal Revenue Service so the agency knows where to deliver the money.

More than 3 million children live in households that could be at risk of missing out, according to separate estimates from the Center on Budget and Policy Priorities and Propel, a private company that runs an app called Fresh EBT used by one in four recipients of the Supplemental Nutritional Assistance Program, known as SNAP.

A Propel survey found that 15% of its users, who are likely eligible for the expanded child tax credit, had yet to file either a 2019 or 2020 tax return as of mid-April. That means the IRS doesn't likely have their information if they didn't use the non-filer tool available last year to get a stimulus payment. They'll have to file a return now or use an online portal the government plans to release allowing parents to submit personal information.

"Things are heading in the right direction. The word is getting out and we're seeing many households taking the necessary step to file taxes. But we are still going to see millions of kids missing out," said Stacy Taylor, head of partnerships and policy at Propel.

Stimulus payment delivery was hard, too

About 8 million households missed out on getting the first stimulus payments, worth up to $1,200 per person, for the same reasons: they hadn't filed a recent federal tax return and the IRS had no way to reach them. The agency also posted a similar online portal last year so people could claim their stimulus payments, of which about half of non-filers eligible for a payments used. The tool couldn't resolve all the challenges for the homeless, who may not have internet access, a bank account or a permanent address.

But not all of those families are at risk of failing to receive the child tax credit payments. Many of them aren't eligible because they don't have children.

Plus, people have had the opportunity to file a 2020 tax return now. Some who don't normally file had more of an incentive to do so this year in order to claim a stimulus payment they initially missed out on. About 2 million people received the payment after filing a 2020 return, according to the IRS.

A survey of a group of 500 low-income households in Washington, DC, found that 40% did not initially receive their stimulus payments. Now that number is down to 18%.

Who's eligible for the child tax credit?

The temporary benefit will be sent to the households of more than 65 million children, or about 88% of the children in the United States.

The enhanced portion of the credit will be available for single parents with annual incomes up to $75,000 and joint filers making up to $150,000 a year.

Congress also made the child tax credit fully refundable so more low-income families can benefit. Previously, if the credit exceeded the taxes owed, parents could only receive up to $1,400 as a refund. These households also must have earned income of at least $2,500. The change could make 20 million more children eligible.

How to reach those most in need

The IRS is responsible for implementing the payments because they are an advance on an expanded child tax credit authorized by the most recent Covid relief legislation.

Families who aren't otherwise required to file a tax return should so that the agency knows that they qualify for the cash -- and the IRS is making a simplified online form available to help those who are not familiar with the tax filing process.

The online portal will allow parents to update their family size, marital status and income as well as opt out of the monthly payments in favor of receiving the tax credit as a lump sum next year when they file their return.

The IRS has said more details are coming soon. It did not provide further details when asked by CNN this week.

A report from Propel and the University of Michigan recommends that the government make the tool mobile friendly because about one-in-four adults with low incomes rely solely on a smart phone to access the internet and more than half lack internet at home. It also recommends that the tool allow people to update their bank account information, which may have changed since they last filed a tax return.

Normally, families claim the child tax credit on their federal tax return. But this year is different because the relief package directed the IRS to send out monthly payments in advance aimed at helping people recover from the pandemic.

While the move offers a boosted payment, it's a temporary expansion. But there is Democratic support for making it permanent. One of Biden's recent proposals, the American Families Plan, calls for increasing the payments through 2025.

The government announced earlier this week that the IRS is still on track to start delivering the advance child tax credit payments on July 15.

The agency was also tasked with sending out the three rounds of stimulus payments and handled the recent tax season while implementing tax code changes included in the Covid relief bill passed in March. Meanwhile, it had a backlog of 2019 returns to process after many IRS workers were sent to work from home during the pandemic.

The IRS has managed the additional work with a budget that has been cut about 20% over the past decade, leaving it with antiquated technology and a smaller staff.

"No doubt, finding people who have not filed a 2019 or 2020 tax return will be difficult for the IRS," said Elaine Maag, a principal research associate in the Urban-Brookings Tax Policy Center where she studies income support programs for low-income families.

But, she added, "no other agency is in a better position to deliver payments to people right now than the IRS."