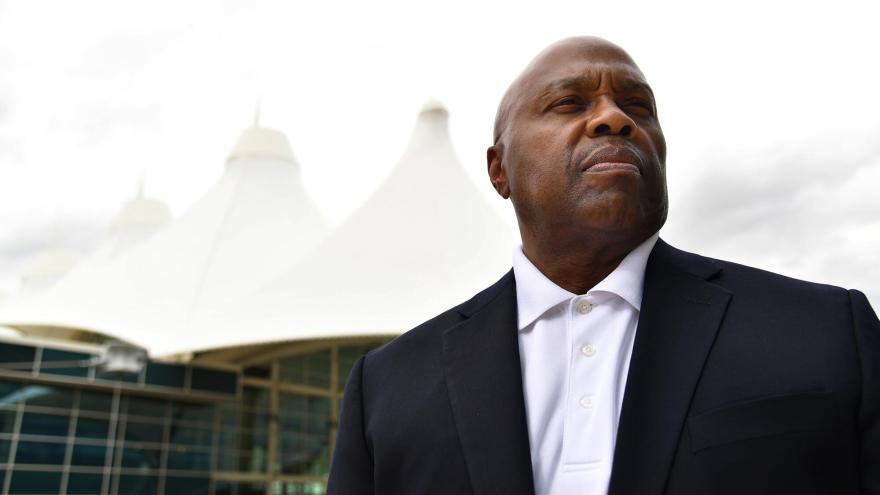 Phil Washington, CEO of Denver International Airport, in June 2021 at the airport in Denver, Colorado. The White House announced that President Joe Biden is nominating Phil Washington to lead the Federal Aviation Administration. If confirmed, he would be the first Black permanent administrator of the agency.

(CNN) -- The White House on Wednesday announced that President Joe Biden is nominating Phil Washington to lead the Federal Aviation Administration. If confirmed, he would be the first Black permanent administrator of the agency.

Washington is currently the chief executive officer of the Denver International Airport -- the third busiest airport in the world.

The FAA administrator position has been vacant since late March, when former President Donald Trump's appointee to the role, Steve Dickson, stepped down halfway through a five-year term. The FAA's current acting administrator, Billy Nolen, is also Black.

Washington's prospective leadership at the FAA, the agency that regulates civilian aviation in the United States, comes as airlines have experienced immense strain resulting from a ramp up of domestic air travel this summer. Bad weather and staffing shortages across the airline industry have led to a rash of canceled flights throughout the summer holidays -- as American passengers have returned to travel in numbers nearing pre-pandemic levels.

Tracking service FlightAware showed about 2,200 flights canceled between the Thursday and Monday of the Fourth of July weekend -- or 2% of scheduled flights. There was a peak of 657 flights canceled on Saturday.

It was the third-straight weekend in which there has been a spike in canceled flights as the airlines struggle to handle the demand for flying with limited crews.

The FAA, meanwhile, continues to deal with criticism of its oversight of Boeing, which produces commercial airplanes. The agency is in an ongoing review of Boeing's 737 MAX 10. Other variants of MAX jets returned to service in 2020 after being grounded for 20 months following two crashes that killed 346 people.

In response to a request from members of Congress, the Department of Transportation's inspector general will audit the FAA's oversight of Boeing 737 and 787 production. The IG will evaluate the FAA's processes for "identifying and resolving production issues" and "addressing allegations of undue pressure within the production environment."

The FAA is also dealing with how to address the eventual roll out of 5G service near airports. In June, the FAA announced that mobile phone carriers had agreed to another delay of rolling out 5G services for an additional year in order to prevent its interference with some airplane technology.

The delay, the FAA said, will allow more time for the permanent fix: replacing or filtering the devices that measure an aircraft's distance from the ground, called radar altimeters. The new technology's promises include faster speeds, but aviation officials say the radio waves can be picked up in some cases by the radar altimeter.

If confirmed, Washington will take the helm of an agency with roughly 45,000 employees.

Washington led the Biden-Harris Transportation Department transition team and co-chaired the Biden/Harris Infrastructure Policy Committee. Prior to his position at the Denver airport, Washington was the CEO of the Los Angeles Country Metropolitan Transit Authority for six years. In LA, Washington was part of a major early effort expand the city's rail network and overhaul the region's bus network amid steep ridership declines.

Washington, a Chicago native and a US Army veteran, was also previously the CEO of the Denver Regional Transportation District.