Biden says 'a number of changes' will ease Afghanistan evacuations 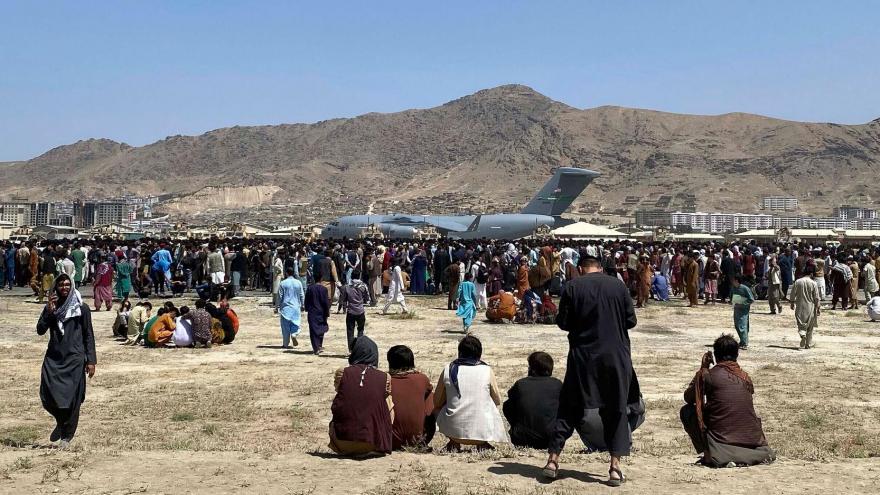 National security adviser Jake Sullivan says the threat of ISIS against Americans and Afghans at the Kabul airport trying to evacuate Afghanistan is "real," and pictured people gather at the international airport in Kabul, Afghanistan, on August 16.

(CNN) -- President Joe Biden said Sunday that "a number of changes" had been made in Kabul to ease the ability of Americans and Afghan allies to flee the country amid emerging threats, and admitted there are discussions about extending the August 31 deadline for US troops to leave Afghanistan.

"We have made a number of changes, including extending access around the airport and the safe zone," Biden said, speaking from the White House. While he said he didn't "want to get into the details," he said, more of the people who need to get out are getting out.

But an administration official told CNN later Sunday that the US military operations at the airport in Kabul have not changed or expanded.

The Taliban will set up some additional entry points along the outer perimeter that they control as part of an effort to thin out the crowds in certain areas, the official said. This comes as the US and the Taliban have been in regular and daily contact about what is happening on the ground.

Biden's comments came after national security adviser Jake Sullivan said earlier in the day that the threat of ISIS against the large mass of Americans and Afghans at the Kabul airport trying to evacuate Afghanistan is "real," adding that the US is placing "paramount priority" on preventing any terrorist attack.

"The threat is real. It's acute. It is persistent. And it is something we're focused on with every tool in our arsenal," Sullivan told CNN's Brianna Keilar on "State of the Union."

CNN reported earlier this weekend that the US military is establishing "alternative routes" to the Kabul airport because of a threat the terror group ISIS-K, a self-proclaimed branch of the Islamic State, poses to the airport and its surroundings.

ISIS-K is a branch of the terror group that first emerged in Syria and Iraq. While the affiliates share an ideology and tactics, the depth of their relationship with regards to organization and command and control has never been entirely established.

Sullivan said US commanders on the ground "have a wide variety of capabilities they're using to defend the airfield against a potential terrorist attack" and the US is working with the intelligence community to determine where a potential attack might originate.

"It is something that we are placing paramount priority on stopping or disrupting, and we'll do everything we can as long as we're on the ground to keep that from happening, but we are taking it absolutely deadly seriously," he said.

Biden received an update Sunday from his national security team on Afghanistan before addressing the evolving situation, although he declined to get into the details of the operation on the ground.

"We are working diligently to make sure we've increased the ability to get them out," Biden said. Gate operations were changed, for example, along with "a whole range of things."

"That's why we've been able to significantly increase the number of people who are getting out," he explained.

He said the Taliban had been helpful in "extending some of the perimeter."

Biden also spoke about negotiations between the US and the Taliban, and said he still does not trust the group, even as the US relies on them for help evacuating Americans. Biden also acknowledged that the Taliban and ISIS-K are enemies.

"The Taliban has to make a fundamental decision," Biden said. "Is the Taliban going to attempt to be able to unite and provide for the well-being of the people of Afghanistan?"

"If it does, it's going to need everything from additional help in terms of economic assistance, trade, a whole range of things. The Taliban has said... they are seeking legitimacy." he said, adding, "We'll see whether or not what they say turns out to be true."

Asked later if he would support sanctions against the Taliban, Biden replied: "Yes. It depends on the conduct."

On "State of the Union," Sullivan was unable to provide a precise number of how many Americans and legal permanent US residents are currently in Afghanistan but put the estimate at "several thousand."

"We are working hard to organize groups of Americans, to bring them on the airbase, to get them on flights and get them out of the country," he said, citing an "operational and logistical challenge in a risky and dynamic environment."

In the last 24 hours, more than 7,500 people have been evacuated from Afghanistan via US military aircraft or US-facilitated flights through private organizations and partnerships with other countries, according to Sullivan.

When pressed on whether the US will eventually get all Americans and Afghan partners out of the country, Defense Secretary Lloyd Austin told ABC News on Sunday that "we can't place, you know, a specific figure on exactly what we'll be able to do."

"But I'll just tell you that we're going to try to exceed expectations and do as much as we can," the secretary said, adding at another point: "We're gonna try our very best to get everybody -- every American citizen who wants to get out -- out."

Biden had previously expressed willingness to extending the American troop presence beyond the August 31 deadline but on Sunday he still expressed hope that wouldn't be necessary.

"There's discussions going on among us and the military about extending," Biden told reporters Sunday. "Our hope is we will not have to extend, but they are going to be discussions." He said the decision might depend "on how far along we are in the process" of evacuating Americans.

Biden was also asked if G7 leaders -- who he is scheduled to meet with next week -- ask the US to stay longer, would he comply.

"We'll see what we can do," he said he would tell the leaders.