Biden's message to Iran with missile strikes: 'You can't act with impunity, be careful' 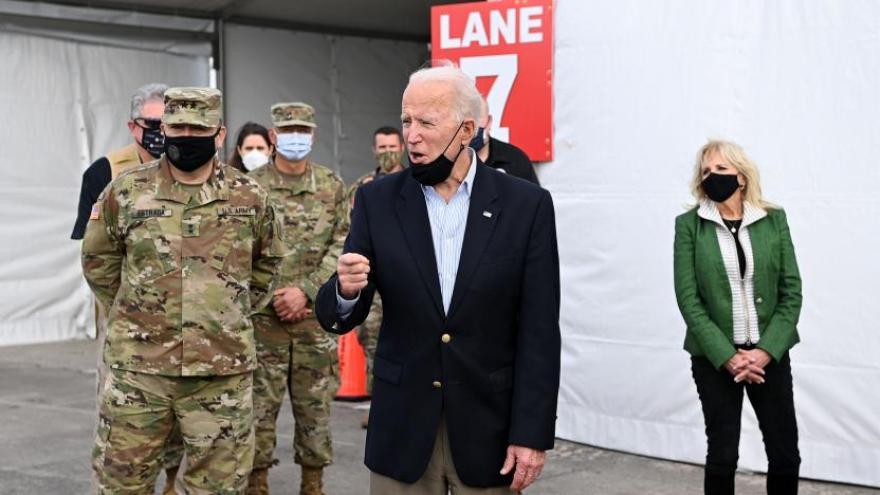 (CNN) -- President Joe Biden looked to send a simple message to Iran by authorizing air strikes in Syria on Thursday: "You can't act with impunity, be careful."

His comments to reporters on Friday came a day after the US military struck a site in Syria used by two Iranian-backed militia groups in response to rocket attacks on American forces in the region in the past two weeks, generating concern among lawmakers who said Biden had not asked for the necessary congressional authorization.

"Up to a handful" of militants were killed in the strikes, a US official told CNN. The site was not specifically tied to the rocket attacks, but Secretary of Defense Lloyd Austin said he was "confident" it was used by the same Iranian-backed Shia militias targeting US and coalition forces in Iraq with rocket attacks.

The site is believed to be used as part of a weapons smuggling operation by the Iranian-backed militias, according to a US official. The site was used by Iraqi Hezbollah militias near al-Hurri village right on the Syrian-Iraqi borders inside Syria, a resident in Albu Kamal city told CNN under the condition of anonymity for security reasons.

The administration has asserted that the strike was backed by Article II of the Constitution, as well as the Charter of the United Nations. Pentagon spokesman John Kirby said the strikes took place "at President Biden's direction" and were authorized not just to respond to the recent attacks against American and coalition forces but also to deal with "ongoing threats to those personnel."

But some Democrats in Congress have criticized the move, questioning the administration's legal justification in the latest fight between the executive and legislative branches over war powers.

House Intelligence Chairman Adam Schiff said that the Biden administration's congressional notification of the military strikes in Syria was "inadequate" and he was looking further into the legal justification behind the military action.

"This makes President Biden the seventh consecutive US president to order strikes in the Middle East," said California Democratic Rep. Ro Khanna. "There is absolutely no justification for a president to authorize a military strike that is not in self-defense against an imminent threat without congressional authorization."

Republicans largely praised Biden for striking against the Iranian-backed militias.

Texas Rep. Michael McCaul, the top Republican on the House Foreign Affairs Committee, said that the US response was a "necessary deterrent" that reminds Iran and its proxies that attacks on US interests "will not be tolerated."