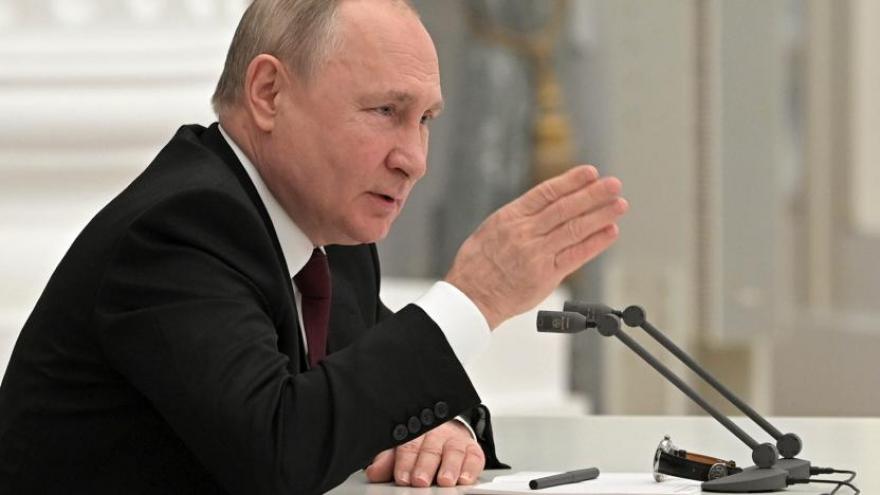 (CNN) -- The new US sanctions triggered by Russia's latest actions in Ukraine included targets that in the past have gone untouched: the family members of those in Russian President Vladimir Putin's inner circle.

By designating the sons of two powerful players close to the Russian president, the Biden administration sent a clear signal that its target list for individual sanctions extends beyond public officials and financiers as part of a new effort to shut down pathways for top Putin associates to shield their wealth by giving it to family members.

Denis Bortnikov and Vladimir Kiriyenko, both designated for individual sanctions by the Treasury Department on Tuesday, hold their own prominent positions in Russian business. But both will now have any US-held assets frozen and be barred from dealing with any US persons solely because their fathers serve as Putin's domestic intelligence chief and as one of Putin's closest advisers, respectively.

"They share in the corrupt gains of the Kremlin policies and should share in the pain as well," Biden said Tuesday.

Sanctioning the sons of two of Putin's closest officials doesn't carry the impact of other measures announced on Tuesday, most notably imposing sanctions on two of Russia's most prominent banks and reducing the country's ability to access Western finance.

But they are meant to unsettle a very personal element of the Russian economy, one driven by the reality that Putin's inner circle and the family members tied to them represent an extraordinary consolidation of wealth and power inside the country.

"This is unprecedented because we are extending the reach of US sanctions to prevent the elites close to Putin from using their kids to hide assets, evade costs, and squander the resources of the Russian people," a senior Biden administration official told CNN. "This is a new approach."

It is clear, officials say, that the opening salvo of that approach is unlikely to be the last.

"Other Russian elites and their family members are now on notice that additional actions could be taken on them as well," Daleep Singh, the deputy national security adviser who is leading the White House effort on sanctions, told reporters.

In response to the US sanctions announced Tuesday, the Russian Ambassador to the United States Anatoly Antonov was quoted on the Russian Embassy Facebook page early Wednesday, Moscow time. He said, "It is hard to imagine that there is a person in Washington who expects Russia to revise its foreign policy under a threat of restrictions. I don't remember a single day when our country lived without any restrictions from the Western world. We learned how to work in such conditions. And not only survive, but also develop our state."

While Biden administration officials say they've seen no indication Putin plans to de-escalate, the individual sanctions provide a window into the new elements being weighed, ranging from export controls to the most aggressive financial sanctions ever deployed.

The sanctions are aimed at "powerful Russians in Putin's inner circle believed to be participating in the Russian regime's kleptocracy and their family members," according to the Treasury Department.

Denis Bortnikov is the son of Aleksandr Bortnikov, the powerful head of the Federal Security Service, Russia's domestic intelligence service known as the FSB. The elder Bortnikov, already subject to sanctions in March of last year, was re-designated for sanctions in the new round.

Vladimir Kiriyenko is the son of Sergei Kiriyenko, the former prime minister and current first deputy chief of staff of the presidential office who is viewed by US officials as "Putin's domestic policy curator." The elder Kiriyenko, also sanctioned in 2021, was also re-designated for sanctions on Tuesday.

The re-designations were necessary to create the legal pathway to target their sons for designation, which freezes all property and interests in property in the US, or in possession or control of a US citizen.

The two sons currently hold prominent roles of their own -- Bortnikov as deputy president of VTB Bank, one of Russia's largest financial institutions, and Kiriyenko as the recently installed CEO of VK Group, which serves as the parent company of the Russian social media company VK, which calls itself "the largest European social network."

A third sanctioned individual, Petr Fradkov, serves as the CEO of Promsvyazbank, the military bank also targeted for sanctions on Tuesday. But he, too, carries a key familial tie to the upper echelons of Putin's orbit.

Fradkov is the son of Mikhail Fradkov, an ex-prime minister of Russia and the former chief of the Russian Foreign Intelligence Service, or SVR. The elder Fradkov was targeted for sanctions by the US in 2018.

Administration officials view shielding wealth through family members as a strategy deployed in the past by sanctioned Russian oligarchs and viewed as likely for the array of Russian officials already designated for sanctions over the course of the last several years.

"Elites close to Putin continue to leverage their proximity to the Russian President to pillage the Russian state, enrich themselves, and elevate their family members into some of the highest positions of power in the country at the expense of the Russian people," the Treasury Department said in announcing the sanctions.

As further escalation appears likely, so does a new reality for those family members: they are now firmly in the Biden administration's sanction crosshairs.