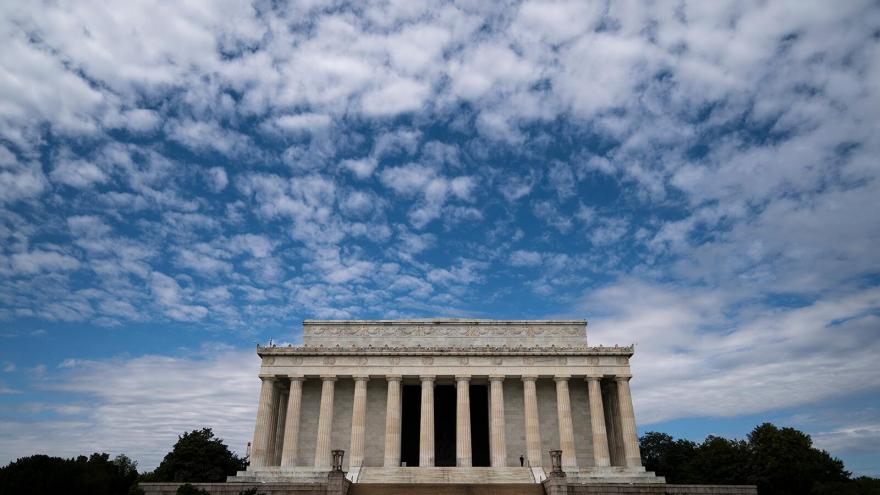 The Lincoln Memorial stands on Tuesday afternoon on April 14, 2020 in Washington, DC. Last week, Events DC, the official convention and sports authority for Washington, DC approved an $18 million relief package to help bolster the hospitality and tourism industry in the nation's capital.

(CNN) -- President-elect Joe Biden's inaugural committee on Thursday announced that it is hosting a national memorial to remember and honor the lives lost to Covid-19 and is asking cities and towns around the country to participate.

The memorial will take place at 5:30 p.m. ET on January 19 and will include a lighting ceremony at the Lincoln Memorial Reflecting Pool in Washington, DC, according to a news release from the Presidential Inauguration Committee.

The committee says they are inviting cities and towns across the country "to join Washington, D.C. in illuminating buildings and ringing church bells at 5:30 p.m. ET in a national moment of unity and remembrance."

"The inauguration of President-elect Joe Biden and Vice President-elect Kamala Harris represents the beginning of a new national journey," said Pill Tobar, the communications director for the committee, in a statement Thursday.

"However, in the midst of a pandemic -- when so many Americans are grieving the loss of family, friends, and neighbors -- it is important that we honor those who have died, reflect on what has been one of the more challenging periods in the nation's history, and renew our commitment to coming together to end the pandemic and rebuild our nation."

The memorial will take place the day before Biden and Harris take their oaths of office at the US Capitol during a significantly scaled-down inauguration ceremony that will implement "vigorous health and safety protocols," the committee said.

The ceremony's footprint will be "extremely limited," according to the committee, and the parade on Inauguration Day will be "reimagined."

The committee previously urged Americans to refrain from traveling for the inauguration of Biden and Vice President-elect Kamala Harris' on January 20 due to the pandemic, instead encouraging people to stay home.

Earlier this month, Biden laid out his three-point plan to combat the coronavirus pandemic, an approach that would contrast with the way that President Donald Trump has dealt with the virus.

The plan, announced on December 11 as he introduced the team he has designed to get the pandemic under control, would aim to distribute 100 million vaccine shots in his initial 100 days in office -- enough to cover 50 million people -- along with his pledge to sign a face mask mandate on his first day in office and efforts to get kids back to school safely.

To date, the vaccine rollout under the Trump administration is lagging behind schedule, with fewer Americans having received their shots than the federal government's Operation Warp Speed had promised would have by this point in time.

Operation Warp Speed had promised that 20 million doses would be administered before January 1. Yet data from the US Centers for Disease Control and Prevention shows that just over 12 million doses have been distributed, and only 2.7 million have actually been administered to people, as of early Thursday morning.

Biden called out the Trump administration Tuesday over the slower-than-expected pace of vaccinations while laying out his own approach for speeding up the process through greater involvement from the federal government.

"As I have long feared and warned, the effort to distribute and administer the vaccine is not progressing as it should," Biden said in a speech in Wilmington, Delaware. "If it continues moving as it is now, it will take years, not months to vaccinate the American people."