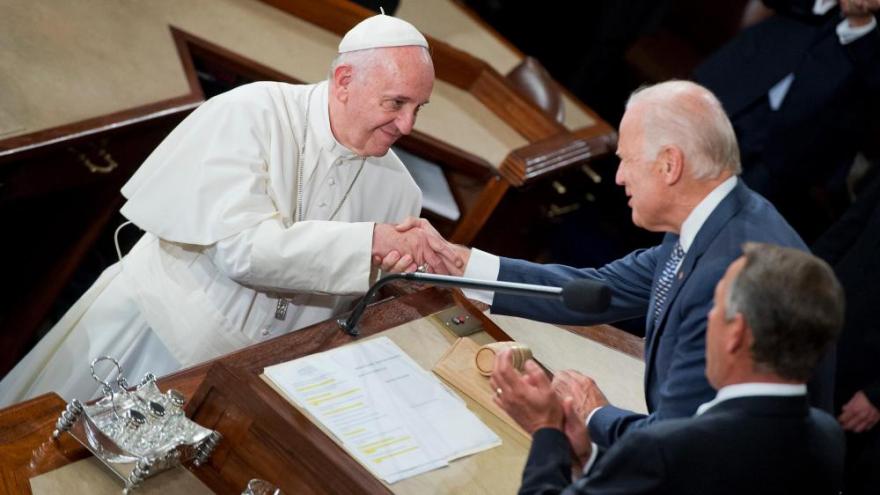 Pope Francis greets then-Vice President Joe Biden, center, and Speaker John Boehner, R-Ohio, in the House chamber of the US Capitol before he addressed a joint meeting of Congress, September 24, 2015.

(CNN) -- Joe Biden rarely misses Sunday Mass. So it was notable when the President-elect didn't attend church on November 29, the first Sunday of Advent and the beginning of the season when Roman Catholics like Biden prepare for Christmas.

Biden's absence was understandable, since just a day earlier he had broken his foot. But the following weekend, Biden was back at his home parish in Wilmington, Delaware -- St. Joseph on the Brandywine -- for Saturday's vigil Mass. He was there again on Tuesday on the Solemnity of the Immaculate Conception, a holy day of obligation.

That's a level of devotion to regular religious services not seen from recent presidents, who were professed Christians but intermittently attended church or worshipped privately while in office. Donald Trump has not had a habit of attending church services weekly, though he made several appearances at the Episcopal church in West Palm Beach near his resort as well as at various evangelical churches across the country.

Barack Obama would go to church for the occasional Christmas or Easter service in Washington or on vacation in Hawaii, but rarely during the rest of the year. And George W. Bush, being a high-profile born-again Christian, tended to worship privately as president at Camp David and intermittently attended church services in Washington, DC, and Texas.

But for Biden, who next month will become the second Catholic president in US history, attending weekly Mass is expected to be a fixed part of his schedule. And while it's unclear whether he will adopt a permanent parish in Washington during his term, Biden's churchgoing will not only provide a window into his spiritual side. It will also be core to his political brand -- apparent not just in the pursuit of his policy agenda but even in his schedule as President.

"For Joe, faith is both a private devotion -- he prays regularly, he goes to church. But it's also public. He's open about and proud that he's a Catholic," said Fr. Kevin O'Brien, a friend and spiritual adviser to Biden and his wife Jill.

O'Brien, now the president of Santa Clara University in California, was heading up the campus ministry at Georgetown University when he met the Delaware senator more than a decade ago. Biden regularly went to Mass at Georgetown's chapel or at nearby Holy Trinity parish when in Washington, a practice he continued during his eight years as vice president and which some around him say he'll continue as president.

"Joe's faith isn't just part of who he is," said Sen. Chris Coons, the Democrat from Delaware and a friend of Biden's. "It's foundational to who he is."

Catholicism is a way of life for Biden. He attended Catholic schools and married his first wife, Neilia, in a Catholic church. He peppers his political speech with quotes from Scripture, Catholic hymns and references to the nuns and priests he learned from in school. More so than any time before in his public life, Biden's faith was woven into his political message during the 2020 campaign. He fashioned himself as the candidate standing up for morality and decency, fighting for the soul of America and calling on the country to "embark on the work that God and history have called upon us to do."

But it's much more than a cultural identity for the 78-year-old President-elect. Since childhood, Biden has been a regular at Mass. He frequently worships with family members, often attending with some of his grandchildren in tow.

While touring across the country in his presidential campaign, Biden would quietly slip into a local Catholic church for Mass -- often coming in a few minutes late or leaving a few minutes early, to avoid the rush. He was even spotted attending daily Mass on Election Day at his parish in Wilmington, Delaware.

These services, said the priest, reflected how important the Catholic faith and ritual were to Biden, particularly on two of the most joyful days of his life. But his faith in Christ and devotion to the church also bolstered Biden during his lowest moments.

The most well-known of those were the deaths of Neilia and his daughter Naomi in a car crash and, decades later, the death of his son Beau from cancer. The President-elect, who regularly wears his late son's rosary on his wrist, has publicly spoken about the role his faith has played in carrying him through grief.

"I'm not trying to proselytize, I'm not trying to convince you to be, to share my religious views. But for me it's important because it gives me some reason to have hope and purpose," Biden shared earlier this year during a CNN town hall with a grieving pastor who'd lost his wife during the Charleston shooting, explaining that he'd promised his own dying son that he would continue to stay engaged and not retreat into himself.

A Catholic in the White House

On the eve of John F. Kennedy's election in 1960, there was still a debate about whether Catholic elected officials might take their directions from Rome and the Pope instead of the US Constitution.

Since then, Catholics have become integrated into American public life to the point where Biden's religious affiliation is just another point in his biography. The last three Speakers of the House have been Catholics, and so are the majority of justices on the Supreme Court. Biden was the first Catholic to serve as vice president.

And despite American Catholics initially finding a home in the Democratic Party, they're now a diverse group politically, especially as the Republican Party has embraced positions on several social issues in line with the church's teachings. CNN's exit polls showed Catholics were nearly evenly split, with 52% supporting Biden and 47% supporting Trump. That's an improvement for Biden over Hillary Clinton's performance with Catholics four years ago, when she lost them to Trump 50% to 46%.

Among conservative Catholics in Washington, Biden's election has been greeted with caution and suspicion. His support for abortion rights and the Obama administration's legal fights with Catholic non-profits over providing contraception coverage loom large.

Ashley McGuire, a senior fellow at the conservative Catholic Association, said it will be difficult to separate Biden's liberalism on abortion and contraception from how he's viewed by Catholics -- especially because of how his campaign emphasized his faith.

"It just sort of highlights even more where he is at odds with the church," said McGuire.

She added that she views Biden's selection of Xavier Becerra for secretary of Health and Human Services as a direct shot at Catholics. As California's attorney general, Becerra sued the Little Sisters of the Poor after the Catholic social-services organization won their lawsuit to be granted an exception to the Obama-era HHS mandate that health-insurance coverage include contraceptives.

But not all Catholics are wary of Biden. Days after the election, Pope Francis congratulated him in a phone conversation. And Washington archbishop Wilton Gregory, who was just recently elevated by Francis to cardinal status has said he looks forward to an "open dialogue" with Biden. While some Catholics have said Biden should not receive communion because of his political views, Gregory has said he will not deny the President-elect the sacrament.

O'Brien insists that Biden has always recognized a distinction of his personal faith from his political career, even if the former frequently informs the latter.

"His faith is reflective of his compassion and empathy, his commitment to the vulnerable, and his service to the country," said O'Brien.

CORRECTION: An earlier version of the headline and this story understated how often past presidents have attended church services. President George W. Bush attended church at Camp David and intermittently in Washington, DC, and Texas.