Biden's call with Xi Jinping has ended. Here are 5 reasons it could prove critical. 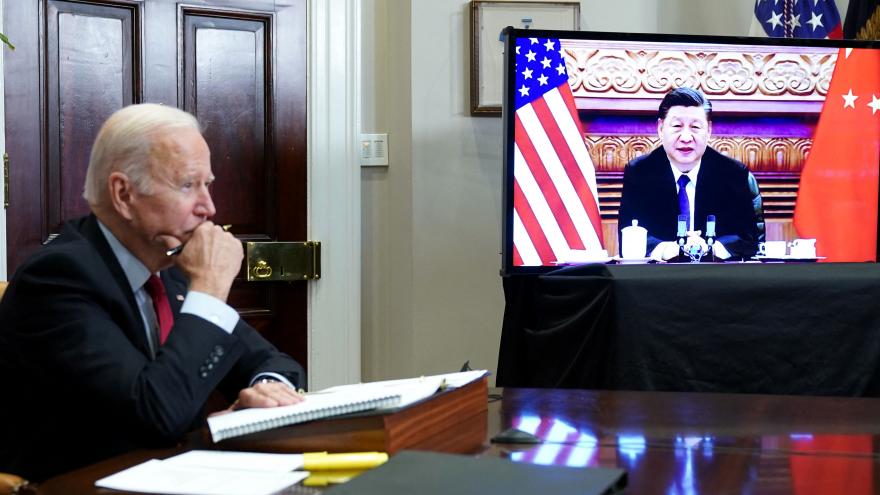 This call -- which went nearly two hours, according to the White House -- comes at a potential turning point for ties between the United States and China. White House officials are watching with growing concern the budding partnership between Xi and Russian President Vladimir Putin, and China's response to Russia's invasion of Ukraine has proved troubling to western observers. Beijing appears to be neither fully supportive nor directly opposed, making for an uncertain stance Biden hopes both to decipher and influence in the call.

The White House said after the call that Biden "described the implications and consequences if China provides material support to Russia."

Conflict and confrontation is not in anyone's interest, Xi told Biden at the start of the call, according to Chinese state media.

"Peace and security are the most cherished treasures of the international community," CCTV quoted Xi as saying on the call.

White House officials said ahead of the call that they expected it could turn intense; a preliminary meeting between the two leaders' aides stretched for seven hours earlier this week. And Biden upped the stakes when he alluded to his call a day beforehand, declaring his Chinese counterpart "does not believe democracies can be sustained in the 21st century."

1. The call came at a critical moment in the Russia-Ukraine war

Biden spoke to Xi at a key juncture. According to US officials, China is weighing whether to provide military or financial assistance to Russia, which has requested it as its military sustains major losses in Ukraine. If China agrees, it could dampen its relationship with the West for decades to come.

"We're concerned that they're considering directly assisting Russia with military equipment to use in Ukraine," Secretary of State Antony Blinken said Thursday, confirming what other US officials had been warning for days.

Already, the United States has conveyed to some NATO allies it believes China has some willingness to support Russia, though Moscow denies asking for it and Beijing says it's not providing any help.

American officials say they believe Xi has been unsettled by Russia's invasion and the performance of Russia's military, which has experienced logistical and strategic setbacks since the invasion began more than two weeks ago.

Watching from Beijing, Xi was caught off-guard that his own intelligence had not been able to predict what would happen, even though the United States had been warning of an invasion for weeks, the officials said.

2. China could provide Russia with a range of support

US officials don't believe China would be willing to provide Russia with large offensive equipment like tanks or jets. Instead, officials said they believed it more likely China would send smaller items like meals, ammunition, spare parts or surveillance equipment -- if they send anything at all.

Officials said it was still possible China helps Russia alleviate the effect of withering Western sanctions through financial support, though it's unlikely the country would be able to completely blunt the effects of the US and European measures.

On their phone call, Biden hoped to make clear to Xi the downsides of assisting Russia's war, either through military or financial assistance. He was set to "make clear that China will bear responsibility for any actions it takes to support Russia's aggression and we will not hesitate to impose costs," Blinken said ahead of the call.

It is widely assumed Xi will secure a historic third term in power during the Communist Party's 20th National Congress in Beijing this fall. During such an important year, western experts believe Xi will be particularly mindful of the economic risks posed by secondary-sanctions. Trade between the European Union and China topped $800 billion last year and US-China trade was over $750 billion, according to China's official data, while its trade with Russia was just under $150 billion.

Yet there remains an ongoing debate within the administration about what steps to take against China should it decide to assist Russia. Biden and his administration have declined to publicly discuss exactly what options they are considering, but have warned that there will be "consequences" for China if they support Russia.

3. US must manage a 'cold-blooded' partnership between Russia and China

Even before Russia invaded Ukraine, US officials were watching warily as Putin and Xi grew closer. CIA Director Bill Burns said last week the partnership was rooted in "a lot of very cold-blooded reasons."

The two leaders declared their relationship had "no limits" in a lengthy document in February, when Putin visited Beijing for talks and to attend the opening ceremony of the Winter Olympics. The document saw China back Russia's central demand to the West, with both sides "opposing further enlargement of NATO."

Since then, the partnership without limits has been tested as Xi weighs how to respond to Russia's war in Ukraine. Beijing's evolving response -- from denying an invasion would happen to attempting to avoid Western condemnation by presenting itself as willing to participate in mediation -- has been closely monitored by the White House.

US officials have seen mixed signals. When China abstained from a United Nations reprimand vote against Russia, it was viewed as a sign of Beijing distancing itself. And a top Chinese official said last month that Ukraine's sovereignty must be respected.

But other signs have pointed toward a more accommodating stance, including China's amplification of Russian disinformation. And top US officials have said a lack of denunciation is enough indication of where China's allegiance lies.

"We believe China in particular has a responsibility to use its influence with President Putin and to defend the international rules and principles that it professes to support," Blinken said Thursday. "Instead, it appears that China is moving in the opposite direction by refusing to condemn this aggression while seeking to portray itself as a neutral arbiter."

Russia's invasion of Ukraine -- breaching its sovereignty and sending Europe into its worst conflict in decades -- has sent ripples of anxiety across the world. One place watching closely is Taiwan, the self-governing island claimed by China.

Beijing has recently stepped-up military flights close to the island there and warned against American support. In the early days of the Ukraine conflict, there were fears Russia's invasion could portend a Chinese invasion of Taiwan, even though it did not appear one was imminent.

American officials have since downplayed the parallels, saying if anything, the united response to Russia may cause China to rethink whatever plans it had for Taiwan. Russia's invasion has galvanized not only the West and NATO but also countries in the Asia-Pacific -- an outcome American intelligence believed Xi was unprepared for, supposing instead that economic interests would prevent countries there from imposing severe sanctions.

Even some on Biden's own national security team were surprised at how quickly some US allies in Asia, including Japan and Australia, were willing to slap sanctions on Russia following its invasion.

5. Biden and Xi have a long history -- and very different worldviews

Biden is fond of citing the long hours he spent with Xi when both were serving as their country's vice president. He has claimed to have spent more time with Xi than any other world leader.

Yet they haven't met face-to-face since Biden took office and Xi has not left China during the Covid pandemic. That has left them to meet in web conferences or speak on the phone, a dynamic Biden has said that he does not find ideal.

He and his team have worked to establish a policy of managed competition with China. They have left in place the tariffs imposed by former President Donald Trump and criticized China for not upholding its commitments from a Trump-era trade deal.

Before the conflict in Ukraine, Biden appeared intent on refocusing American foreign policy toward Asia, where he views the competition between the US and China as a defining challenge of the next century.

And while the Ukraine crisis has preoccupied the White House in recent weeks, officials insist they are still able to maintain their overriding vision.