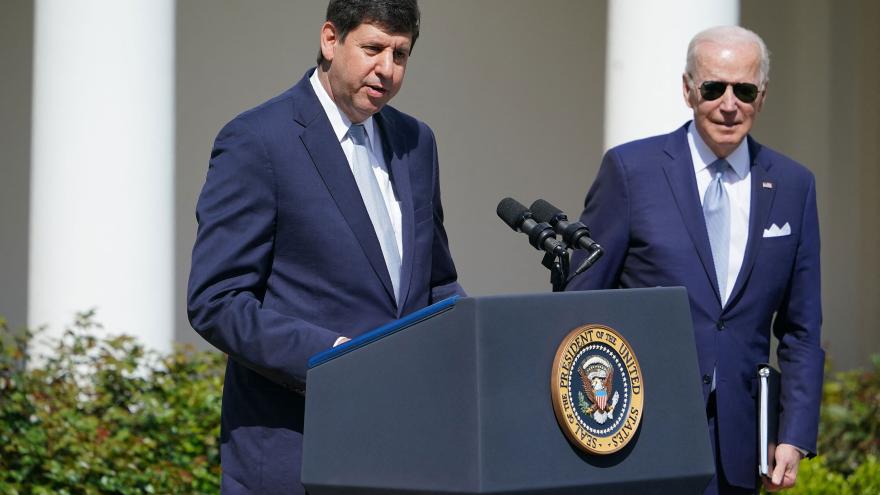 (CNN) -- President Joe Biden's nominee to run the Bureau of Alcohol, Tobacco, Firearms and Explosives vowed he would not be influenced by political considerations if he secures the job at a Senate confirmation hearing on Wednesday with the nation's attention focused on gun violence after a horrific shooting at a Texas elementary school.

An 18-year-old gunman on Tuesday fatally shot 19 children and two teachers at an elementary school before he was killed by law enforcement officers, officials said. It is the deadliest shooting at a school since the Sandy Hook massacre in Connecticut in 2012 that left 26 people dead, including 20 children aged between 6 and 7 years old.

The tragedy has shocked the nation and ratcheted up the pressure on Congress and the President to take action, though Democrats can do little to pass stricter gun control measures in a 50-50 Senate amid widespread Republican opposition.

Against that backdrop, the Senate Judiciary Committee considered the nomination of Steve Dettelbach to run the ATF during a hearing on Wednesday. Dettelbach is a former federal prosecutor and was previously unanimously confirmed by the Senate to serve as the US attorney for the Northern District of Ohio under President Barack Obama.

The ATF has operated under a series of acting directors since its last Senate-confirmed leader stepped down in 2015, and the Senate last confirmed an ATF nominee in 2013.

In remarks before the committee, Dettelbach addressed the school shooting, calling the pain the families and the community now feel "unimaginable."

Dettelbach argued that he is dedicated to upholding the law free from political interference and would do so in the post of ATF director if confirmed.

"Politics can play no role in law enforcement. None at all," he said.

"I worked under Republican administrations, and I worked under Democratic administrations as a federal prosecutor and I have lived that credo and I vow to continue to do it because people need to have confidence that people in law enforcement's only agenda is to enforce the law -- and if you're at the ATF to catch the bad guys and protect the public," he said.

"I vow to never let politics in any way influence my action as ATF director," he added.

Democrats used the hearing to argue that the nominee should be swiftly confirmed in the wake of recent mass shootings and to emphasize the importance of the post and the work of the agency. Republicans used their questions to grill the nominee on controversial issues, such as the nominee's expression of past support for an assault weapons ban.

Dettelbach could be confirmed in the Senate without any GOP votes if all Democrats vote in favor and Vice President Kamala Harris breaks a tie.

But Democratic unity is not guaranteed on the contentious issue of gun policy. And the White House has already suffered an embarrassing setback over its efforts to confirm a nominee to head the bureau last fall.

In September 2021, the White House withdrew the nomination of David Chipman to lead the bureau. Biden put the blame on Republicans for the inability to get Chipman confirmed, even though there had been stiff resistance among moderate Democrats and independent Maine Sen. Angus King -- as well as GOP senators -- over Chipman's past record on gun control.

The incident laid bare the reality of attempting to confirm someone to a post that has made past comments on such a sensitive and divisive issue as gun control. Dettelbach made clear he supported universal background checks and a ban on assault-style weapons during his bid to be attorney general of Ohio in 2018, positions that are now attracting scrutiny as the Senate vets his nomination.

In a boon to the effort to confirm the nominee, though, King said he is "inclined to support" Dettelbach for the job.

King told CNN that his meeting with Dettelbach was "very good" and his "attitude" was much different than Chipman's. "This guy is the right guy," he said.

Democratic Sens. Joe Manchin and Jon Tester both told CNN they had good meetings with Dettelbach but would wait til today's hearing wraps to make a decision on his nomination.

The White House said the Senate should move "quickly" to confirm the nomination following Wednesday's hearing.

In a statement, White House Press Secretary Karine Jean-Pierre said, "it's never been more important to have a tough, experienced, leader like Steve Dettelbach at the helm of ATF to support the agents risking their lives on the front lines every day to protect the American people."

Nominee grilled by Republicans over position on assault weapons

Republican Sen. Tom Cotton of Arkansas pressed the nominee to define the term assault weapon after noting that during Dettelbach's 2018 campaign for Ohio attorney general he supported a ban.

"What is an assault weapon -- can you define it for me?" Cotton asked.

"When I was a candidate for office I did talk about restrictions on assault weapons. I did not define the term and I haven't gone through the process of defining that term. That would only be for the Congress if it chose to take that up," the nominee said.

"I acknowledge that's a very difficult issue. That is for this body to decide," he later added.

Democrats argue for swift confirmation in wake of recent shootings

Senate Judiciary Chairman Dick Durbin, an Illinois Democrat, called Dettelbach "well-qualified" during the hearing. "This is an agency which has the technical capacity to help us to solve gun crimes and to keep guns out of the hands of people who shouldn't have them," he said.

Some Democratic senators referenced the Texas elementary school shooting as well as a recent mass shooting in Buffalo, New York, to argue the necessity of quickly confirming a new ATF director.

"We cannot afford to keep saying some day in the future, somehow we will take action, I think the least we could do is deliver a Senate-confirmed leader for the ATF," Democratic Sen. Chris Coons of Delaware said.

Durbin described the tragedy as "devastating" and "unconscionable."

Durbin will work with his Democratic colleagues to schedule hearings on gun violence in America when lawmakers return from their Memorial Day recess, he said.

He said Democrats are committed to action, but he conceded that it would be an uphill lift to get Republican votes.

"The President was right -- it's time for us to stand up and fight back as a nation," Durbin said. "We are loath to call ourselves leaders in this country if we don't address it.