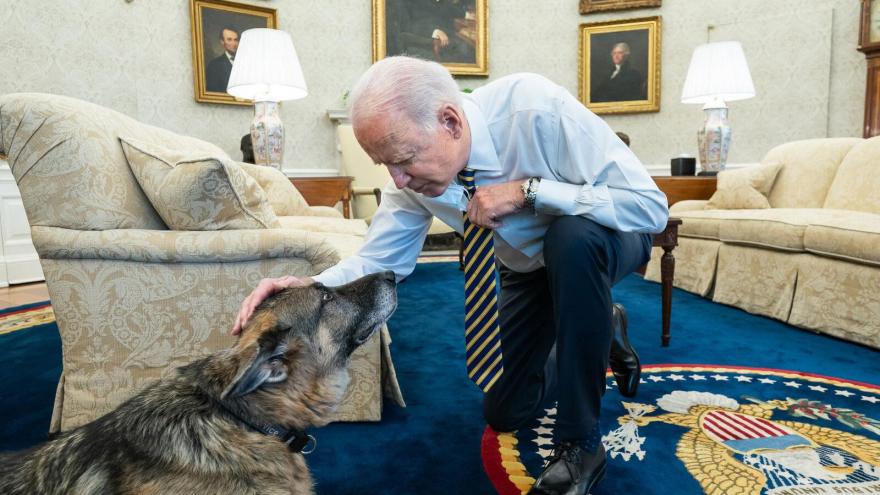 President Joe Biden pets the Biden family dog Champ in the Oval Office of the White House Wednesday, February 24, prior to a bipartisan meeting with House and Senate members to discuss supply chains.

(CNN) -- The Bidens announced Saturday that Champ, their "beloved" German Shepherd who had been with their family since 2008, has died.

"Our hearts are heavy today as we let you all know that our beloved German Shepherd, Champ, passed away peacefully at home," President Joe Biden and first lady Jill Biden said in a statement. "He was our constant, cherished companion during the last 13 years and was adored by the entire Biden family."

The Bidens continued: "He loved nothing more than curling up at our feet in front of a fire at the end of the day, joining us as a comforting presence in meetings, or sunning himself in the White House garden. In his younger days, he was happiest chasing golf balls on the front lawn of the Naval Observatory or racing to catch our grandchildren as they ran around our backyard in Delaware."

Champ had joined the Biden family during the presidential transition in December 2008, weeks after Biden had become vice president-elect. Champ, the Bidens said Saturday, had been with the family during their "most joyful moments" and "most grief-stricken days."

In recent months, Champ's health had declined, due in large part to his advanced age.

The German Shepherd was a month old when Biden picked him out of a litter from a breeder in Spring City, Pennsylvania. The acquiring of Champ was a promise kept by Jill Biden, who said her husband could get a dog if he and Barack Obama won the presidential election.

During the holidays in 2008, the Biden grandchildren helped to name the new puppy Champ, an homage to the nickname Joe Biden's father called his son, according to Biden's press secretary at the time.

Biden has had a long relationship with the breed, saying in an interview shortly after getting Champ, "I've had German Shepherds since I was a kid."

The Bidens also have another German Shepherd named Major, a 3-year-old pup they adopted in November 2018 from the Delaware Humane Association. Biden told reporters earlier this year that he had adopted Major in part as a companion for Champ, to keep the older dog busy and active.

The two dogs were featured in Biden's 2020 campaign ads for president. Less than a week after he was inaugurated, Biden restored the presidential tradition of bringing pets to the White House by moving Champ and Major in with them.

"Champ is enjoying his new dog bed by the fireplace, and Major loved running around on the South Lawn," the first lady's press secretary Michael LaRosa had told CNN at the time.

The dogs spent some brief time in Delaware this year following a biting incident involving Major, but returned to Washington in late March.

Jill Biden noted during a February appearance on Kelly Clarkson's talk show that getting Champ and Major acclimated to living at the White House was something she was focused on.

"They have to take the elevator, they're not used to that, and they have to go out on the South Lawn with lots of people watching them," the first lady added. "So that's what I've been obsessed with, getting everybody settled and calm."

Biden told Clarkson that the dogs' companionship was constant.

"They like to be wherever we are. Even if my door's closed, they're sitting right outside the door like, 'Let me in! Let me in!'" she said.

It was a sentiment echoed in Saturday's statement from the President and first lady, who noted: "Even as Champ's strength waned in his last months, whenever we came into a room, he would immediately pull himself up, his tail always wagging, and nuzzle us for an ear scratch or a belly rub. Wherever we were, he wanted to be, and everything was instantly better when he was next to us."

"We love our sweet, good boy and will miss him always," they added.