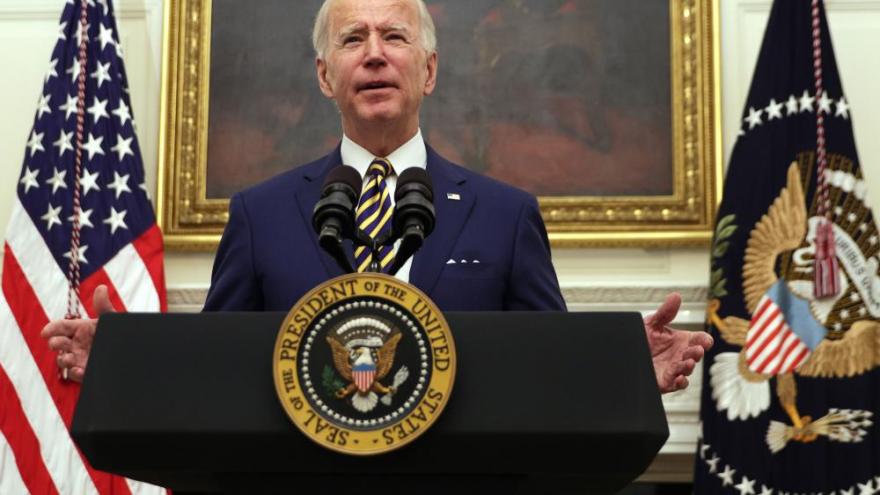 U.S. President Joe Biden speaks during an event on economic crisis in the State Dining Room of the White House on January 22, 2021, in Washington, DC.

Similar executive orders signed by former President Donald Trump had little effect because his administration waited to formalize changes until his second to last day in office. By contrast, Biden has set a 180-day deadline to deliver on fundamental change to the process, according to an administration official.

"I've long said that I don't accept the defeatist view that the forces of automation and globalization can keep union jobs from growing here in America," Biden said at a news conference before signing the order.

The order follows others Biden signed last week directing additional relief to the neediest Americans, as well as starting the process of raising the minimum wage for federal contractors and workers to $15 an hour.

The President signed 30 orders in his first three days in office, some of them reversing Trump's policies. Additional orders are expected this week with a series of themed days covering racial equity, climate, health care and immigration.

The President "believes we can rebuild the vitality of American manufacturing and our industrial strength. A big piece of that is centered around the idea that when we use taxpayer money to rebuild America, we buy American and we support American jobs," the administration official said Sunday on a call with reporters.

Currently, a patchwork of federal rules requires that a portion of government spending on things like infrastructure, vehicles and other equipment is restricted to goods that are made in the United States. But there are loopholes depending on the material, the amount of the purchase, and what qualifies as American made.

Biden's executive order will change how domestic content is defined and measured for qualifying products as well as increase the required threshold. It will also create a senior position at the Office of Management and Budget to oversee the process by which contractors can apply for waivers from the Buy American rules, with the goal of reducing the number of waivers granted.

The administration will also create a public website that will post all waiver requests and direct agencies to proactively connect with small American manufacturers that are often left out of the process.

What happened to Trump's promised boost

The manufacturing sector didn't get the boost Trump repeatedly promised. The number of manufacturing jobs grew during the first two years of his administration -- though at roughly the same pace as they did under President Barack Obama -- but then slowed in 2019 after the boost from the Republican-backed tax cuts wore off and as Trump's China tariffs created uncertainty for businesses.

The pandemic hit manufacturing hard as the rest of the economy slowed down. The sector is still down 543,000 jobs since February 2020, according to the Bureau of Labor Statistics.

"Trump talked about buying American and hiring American a lot, but his executive orders didn't amount to much at all," said Scott Paul, president of the Alliance for American Manufacturing.

"There's an opening here for Joe Biden to really be a 'Made in America' president," he added.

Paul said he's eager to see Biden close the loopholes in the current federal procurement process as well as follow through on his campaign promise to purchase $400 billion in American-made goods and materials for infrastructure projects.

Biden's Buy American policy may concern some foreign trading partners. Canada's Foreign Affairs Minister Marc Garneau said in an interview with CBS News on Sunday that "it might jeopardize the very strong an integrated supply chains that exist between our two countries."

Many of America's allies were hit with tariffs under the Trump administration. While Biden has also pledged to take a tough stance on trade and crack down on unfair trading practices, he has reiterated a commitment to do so in partnership with America's allies -- unlike his predecessor, who mostly acted unilaterally when it came to imposing tariffs.

"We remain very committed to working with partners and allies to modernize international trade rules to make sure that we can use our taxpayer dollars to stir investments in our own countries," the Biden administration official said.