Biden will not travel with a delegation to Queen Elizabeth's funeral 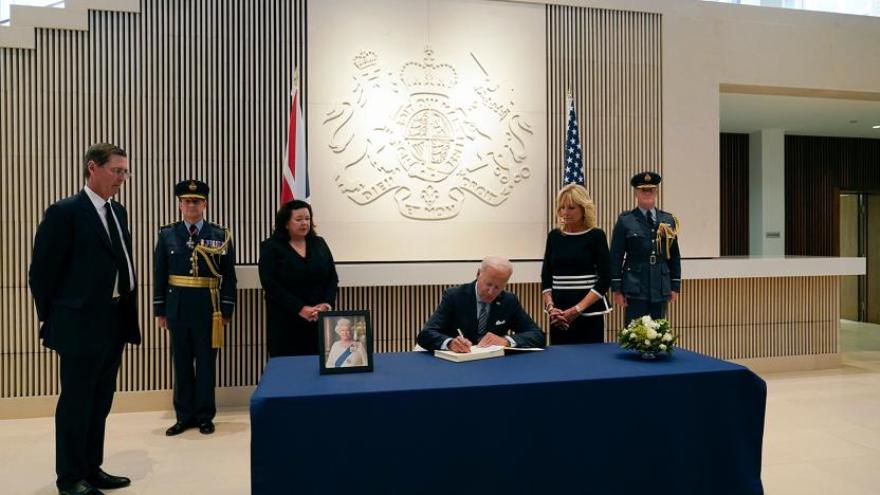 Buckingham Palace did not invite President Joe Biden, seen here signing a condolence book for Queen Elizabeth II in Washington on September 8, to assemble a delegation to attend the funeral of the Queen, and instead extended a specific invitation for only the President and first lady.

(CNN) -- Buckingham Palace did not invite President Joe Biden to assemble a delegation to attend the funeral of Queen Elizabeth II next week, and instead extended a specific invitation for only the President and first lady, a White House official told CNN.

The White House announced Sunday that Biden had formally accepted the invitation and would be accompanied by the first lady.

Previous state funerals, such as the one for former South African president Nelson Mandela, have allowed for the sitting president to bring a delegation of officials to the event.

The state funeral for the Queen will take place on September 19 at Westminster Abbey, and she will lie in state in Westminster Hall from Wednesday, Buckingham Palace announced Saturday.

The Queen's coffin arrived Sunday at the Palace of Holyroodhouse in Edinburgh, following a six-hour journey from Balmoral Castle to the Scottish capital. Britain's longest-serving monarch died Thursday at the age of 96 at her Scottish country estate in Balmoral.