Biden will meet with Stacey Abrams in Atlanta 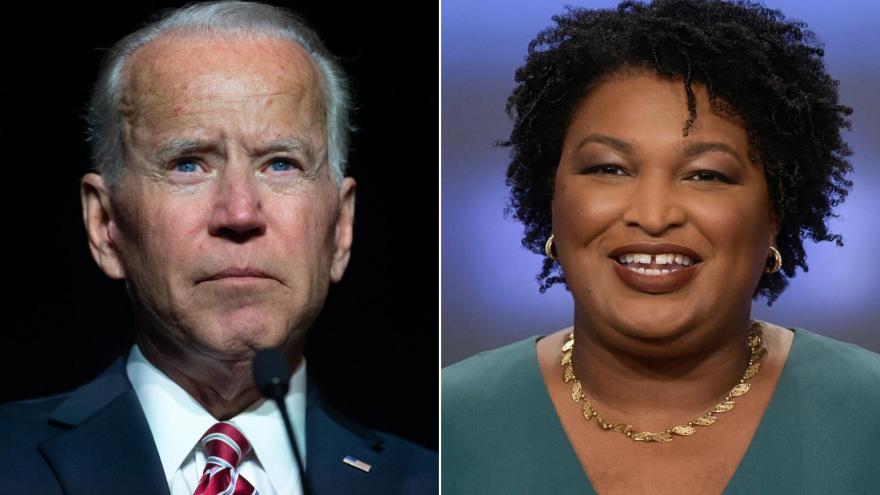 President Joe Biden will meet with Stacey Abrams while in Atlanta on Friday.

(CNN) -- President Joe Biden will meet with Stacey Abrams while in Atlanta on Friday, according to an administration official, who said Abrams has "played a leading role in voting access and voter protection and she will be an important partner in taking action on this important issue moving forward."

"The President will be active on voting rights issues, not just in Washington, but also in the states, and this is an example of him doing just that," the official said.

The Associated Press was first to report on the upcoming meeting, which an Abrams aide later confirmed to CNN.

Abrams is widely seen as a star in the Democratic Party, having come off her 2018 gubernatorial loss to found the voter outreach organization Fair Fight. In 2019 she became the first Black woman to deliver the official Democratic response to a State of the Union address, and she was among the candidates considered as potential running mates for Biden.

She has devoted years to expanding the electorate and boosting turnout in Georgia, which had been reliably red for decades. The state went to Biden in the 2020 election, making him the first Democratic nominee in 28 years to win Georgia.

The fight over voting access in the state has only continued since the election. A key committee in the Republican-controlled Georgia Legislature on Wednesday made a surprise move and began work on a massive new voting bill that would give the state broad powers over local election officials, set limits on weekend early voting and add voter ID requirements for absentee ballots.

Biden is traveling to Atlanta after the murders of eight people -- including six Asian women, among them four South Koreans -- shook the city amid rising concerns nationwide about anti-Asian violence during the coronavirus pandemic.

In light of Tuesday's shootings, Biden and Vice President Kamala Harris postponed the political portion of their trip and will meet with Asian American leaders and visit the US Centers for Disease Control and Prevention, according to the White House.

Georgia state Rep. Bee Nguyen will be among others meeting with Biden and Harris on Friday to discuss the recent spa shootings in metro Atlanta, telling CNN that she will attend the meeting along with Atlanta Mayor Keisha Lance Bottoms, other state representatives and Asian American Pacific Islander community leaders.

Among the issues they will bring up is the concern that the shootings be "taken seriously" and considered a hate crime against Asians and not dismissed as the suspect having a "bad day," Nguyen said. Capt. Jay Baker of the Cherokee County Sheriff's Office has faced criticism for saying the suspect had "a really bad day."

This story has been updated with more details and background information.