Biden will get tested more frequently and continue in-person campaigning 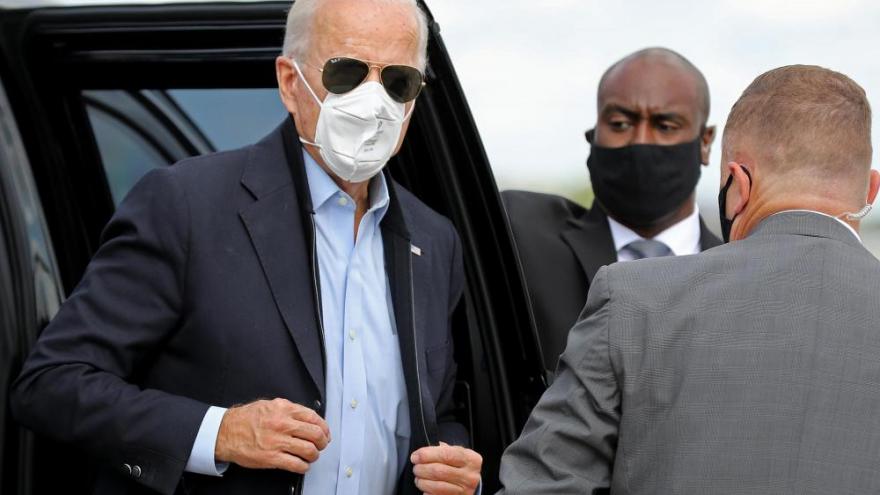 Joe Biden will be tested more frequently for Covid-19 and intends to move forward with in-person campaigning. This photo shows Biden preparing to board a plane to Grand Rapids, Michigan, at New Castle County Airport October 2, 2020 in New Castle, Delaware.

His campaign said Saturday that it would disclose the results of every test Biden takes.

"We have adhered to strict and extensive safety practices recommended by public health experts and doctors in all of our campaigning — including social distancing, mask wearing, and additional safeguards," campaign spokesman Andrew Bates said in a statement. "Vice President Biden is being tested regularly, and we will be releasing the results of each test."

In early September, deputy campaign manager Kate Bedingfield told reporters on a press call that Biden was being tested on a weekly basis, but that has picked up as his travel has increased in recent weeks. The former vice president most recently announced that he tested negative for coronavirus on Friday, hours after Trump announced his own diagnosis -- and days after the two shared a stage for the first presidential debate.

After attending mass in Wilmington, Delaware, on Saturday, Biden told reporters he would be tested again for coronavirus on Sunday morning, two days after traveling to Grand Rapids, Michigan.

Biden and Trump's podiums were placed 12 feet and 8 inches apart during Tuesday night's debate, according to a source with knowledge of the debate set-up.

There was no contact from the Trump campaign or the White House to alert the Biden campaign of possible exposure, a senior Biden campaign official who was with the former vice president at the debate said. That official said Biden's campaign believes there is not much risk because "we were never near them."

Campaign aides believe that over the past few months, they've developed an effective recipe for campaigning safely, including mask wearing, social distancing and smaller events, and they intend to continue with those practices.

Biden and his wife Jill are scheduled to travel to South Florida on Monday. On Thursday, Biden will visit Arizona, his first visit to the battleground state, with his running mate Kamala Harris.

On Friday, Biden traveled as scheduled to Grand Rapids, after receiving a negative coronavirus test result. While he went forward with his planned remarks on the economy, he did cancel an in-person event.

During Friday's remarks, he said Trump's positive test for coronavirus is a "bracing reminder" of the seriousness of the pandemic.

"We have to take this virus seriously. It's not going away automatically," Biden said. "We have to do our part to be responsible. It means following the science, listening to the experts, washing our hands, social distancing. It means wearing a mask in public. It means encouraging others to do so as well."

A campaign official said the recent developments regarding coronavirus reinforces why it's a central issue in this campaign.

"It's about who do Americans trust to get the virus under control and to protect them and how to get the country back to work," the official said.

The official reiterated that if Biden were to ever test positive for coronavirus, the campaign would make that information public.

The aide said the decision to pull negative ads was made before the White House announced Friday evening that Trump was going to Walter Reed medical center for a few days.

In response to the Biden campaign's decision to pull the negative ads, spokesman Tim Murtaugh told CNN the Trump campaign will not make a similar move.