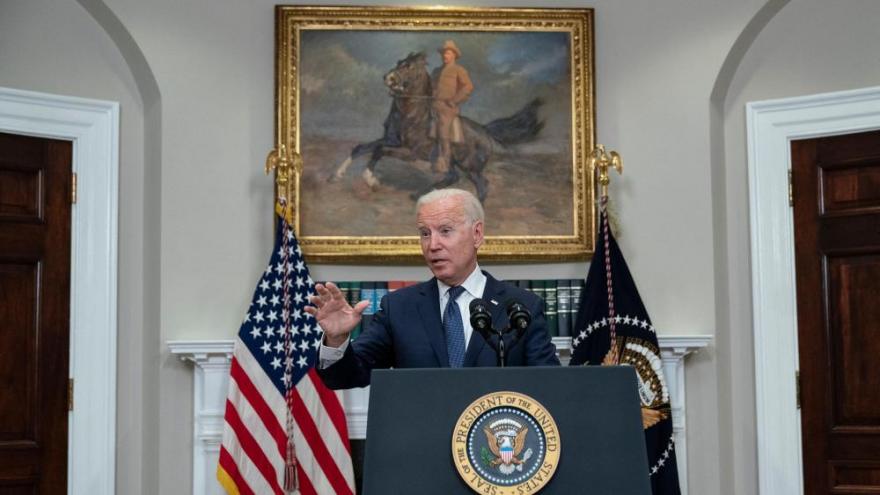 Group of Seven leaders are expected to press President Joe Biden to extend the deadline for US troops withdrawal from Afghanistan during a Tuesday morning meeting.

(CNN) -- Leaders from the top foreign allies of the United States are planning to press President Joe Biden to extend the deadline for US troops to withdraw from Afghanistan during a Tuesday morning meeting, officials familiar with the matter said.

The virtual gathering of the Group of 7 will be the first international forum for Biden to speak collectively with top European allies about the crisis in Afghanistan, which has caused anger and anxiety in foreign capitals over its chaotic execution.

Ahead of the talks, American and western officials were discussing the expected pressure from other leaders on Biden to maintain troops in Kabul past the August 31 deadline.

Biden has not publicly committed to such a move, worrying some allies who fear there won't be enough time to get their citizens and Afghan allies who assisted in the war effort out of the country.

But the administration must decide on Tuesday whether it will try to extend the evacuation mission in Afghanistan beyond August 31 according to a defense official directly familiar with the discussions.

The military is advising the White House the decision must be made on Tuesday in order to have enough time to withdraw the 5,800 troops currently on the ground and their equipment and weapons. If the President agrees, the military anticipates "a few more days" of trying to evacuate as many people as possible before the draw-down of US forces begins, possibly and the end of this week. As of Monday, Biden was still deciding what to do. An administration official told CNN that Biden could signal his decision during the meeting with G7 leaders.

Several of Biden's advisers have counseled against an extension, citing the security situation on the ground. Officials have spent recent days monitoring potential terrorist threats, aware that the chaotic situation outside the airfield has created a target for ISIS-K and other organizations.

Overnight, the pace of evacuations accelerated dramatically, according to the White House. An official said on Monday morning that approximately 10,400 people had been evacuated from Kabul over the past 24 hours on 28 separate US military flights -- more than doubling the previous day's figures. The official said an additional 5,900 people were evacuated on coalition aircraft.

Still, despite the evacuation effort gaining speed, concerns remain among US allies that chaos or a terrorist attack could again hamper progress. The US is closely monitoring threats from ISIS outside the Kabul International Airport, and on Monday a firefight broke out involving US, German and Afghan forces, who clashed with unknown assailants, according to Germany's Joint Forces Operations Command.

Biden indicated during a rare Sunday appearance at the White House that discussions were underway about the potential for remaining in the country longer, but said his goal was still to have troops out by August 31.

"Our hope is we will not have to extend, but there are going to be discussions, I suspect, on how far along we are in the process," he said.

The Taliban, however, has signaled it feels the August 31 date is firm, complicating any decision making on whether to keep US forces on the ground past the deadline. Biden said on Sunday it "remains to be seen" whether the US asks the Taliban directly about staying in the country into next month.

The Pentagon says they are aware of the Taliban's statement that the US must remove all forces by August 31, and that they are still currently planning to meet that deadline.

"That is the mission we've been assigned by the commander in chief assigned to us, and that's what we're trying to execute," said Pentagon spokesperson John Kirby at a briefing with reporters.

However Kirby added, "if there needs to be a discussion about extending that timeline, then we absolutely will have that discussion at the appropriate time with the commander in chief."

Tuesday's effort to press Biden into extending the timeline is expected to be led by British Prime Minister Boris Johnson, who is the current G7 president under its rotating leadership. There is an expectation as well that French President Emmanuel Macron and German Chancellor Angela Merkel will also apply pressure. Macron, in a phone call with Biden last week, told the US President the west bore a "moral responsibility" with regard to Afghans who need protection and share their values.

"We cannot abandon them," Macron told Biden, according to a readout of the call from the Élysée.

Biden has also discussed the timeline in individual telephone calls with Johnson, Merkel and Italy's Mario Draghi, but hasn't committed firmly to remaining in Kabul past the end of the month, officials said.

At a closed-door meeting of NATO foreign ministers on Friday, several European allies publicly raised their desire to keep troops past August 31 in order to get more people out of Afghanistan, a person familiar with the meeting said. The US was non-committal.

"The US has stated the timeline ends on the 31st of August," NATO Secretary General Jens Stoltenberg said in a press conference following the meeting.

Biden on Sunday predicted he wouldn't be able to offer any firm commitments if his counterparts ask him to extend the deadline.

"I will tell them that we'll see what we can do," he said.