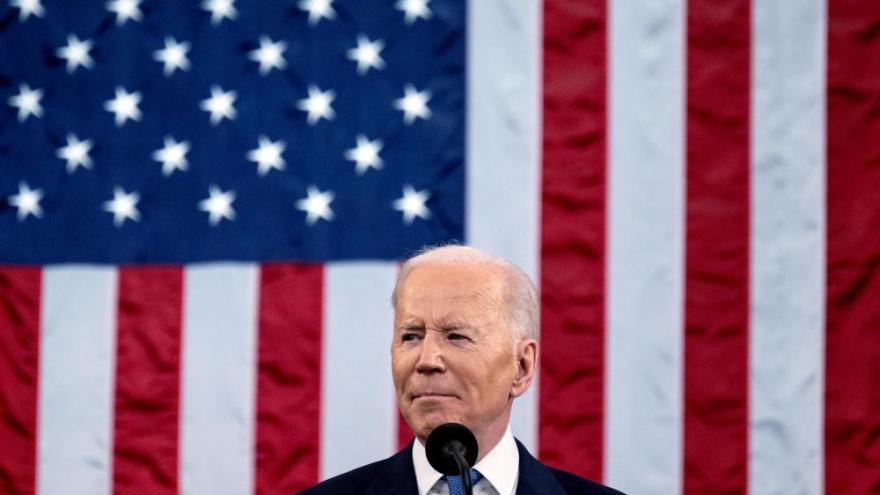 President Joe Biden delivers his State of the Union address to a joint session of Congress at the Capitol on March 1, 2022, in Washington.

The Buy American rule change, which was first announced in July 2021, will require any goods purchased with taxpayer money to contain 75% US-made content, up from the current 55% requirement.

In remarks from the White House, the President also touted an announcement from Siemens USA that it will expand its domestic manufacturing of electrical equipment, like circuit boards for EV chargers, with a new $54 million investment that it says will create 300 jobs.

The President spoke hours after the Bureau of Labor Statistics reported February's job numbers exceeded expectations as the US economy added 678,000 jobs during the month. The unemployment rate ticked down to 3.8% in February as well, a new pandemic low.

"Today's news is a welcome reminder that we're coming back stronger as a country and as a people," Biden said.

A senior administration official said the rule will be phased in order to give companies time and space to modify their supply chains. That process will begin this year with the requirement shifting to 60% in October and then to 75% by 2029.

The rule includes a new framework to institute enhanced price preferences for designated critical products and components in strategic industries, the President said.

"We saw during the pandemic that supply chain disruptions can put American lives and livelihoods at risk. When we needed it the most, we were short on masks, gowns, gloves, ventilation and other essential health products -- we had to buy abroad. So we're creating a new price preference," Biden said.

The President said, "We're talking about things like semiconductors, some pharmaceutical agreements, advanced batteries, among other things. It's worth it for us to ensure that we have a domestic capacity to protect us from shortages and price spikes in the future."

It's unclear how many companies or products this will impact since the new Buy American rule coming out of the Federal Acquisition Regulatory Council does not include an update allowing the federal government to verify claims made by contractors about the percentage of domestically made content in their products. One administration official noted, however, that the administration still expects to ultimately institute a reporting requirement for companies -- something the President pledged when he announced the proposal last year.

The process for the new rule began with Biden's Made in America executive order that established a 180-day interagency review and created the Made in America office at the Office of Management and Budget. That position at OMB helps agencies implement the Made in America rules, oversees the process by which contractors can apply for waivers from them and updates the public on granted exceptions by posting that information on a public website.

Biden said the last two years have been "two of the hardest years this nation has ever faced."

"It's been punishing, but we're coming back," he said. "So many families are still struggling, though, to make ends meet because of inflation. I understand our top priority must be getting prices under control."

The Biden administration is grappling with soaring inflation, high consumer prices and a shortage of goods -- all issues that have contributed to economic anxiety among Americans and caused Biden's approval ratings to slip.

"What we've seen in the past months is more reason why we need to reject a defeatist view that the forces of automation and globalization mean we can't have good-paying union jobs manufacturing here in America," Biden said. "Our manufacturing future, our economic future, our solutions to the climate crisis -- they're all going to be made in America."