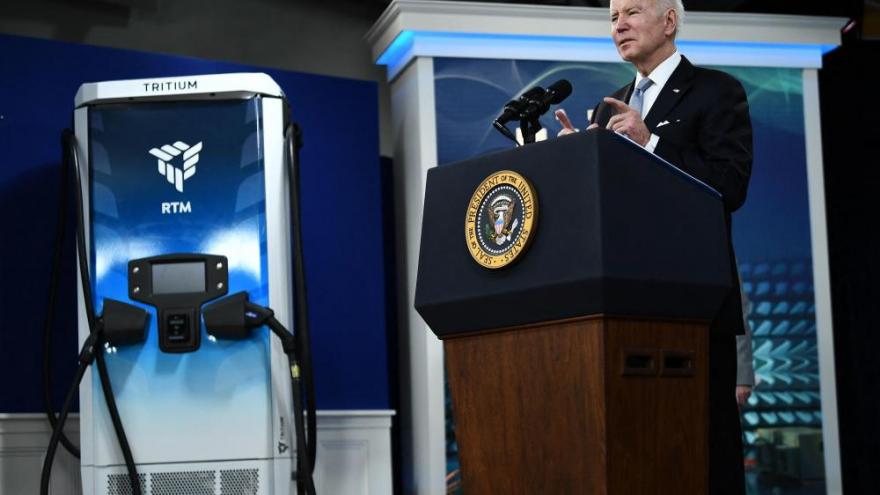 (CNN) -- President Joe Biden on Thursday announced $1 billion in funding from his administration's signature bipartisan infrastructure law would go toward cleanup and restoration of the Great Lakes.

The bulk of funding is targeted to restore what the Environmental Protection Agency has identified as severely degraded "Areas of Concern." The administration projects that funding from the infrastructure law -- combined with funds from annual Great Lakes Restoration Initiative appropriations and other sources -- should allow restoration of at least 22 areas of concern across Wisconsin, New York, Ohio, Minnesota, Michigan, Indiana and Illinois by 2030, with infrastructure funding also benefiting three additional sites over the same period.

The President said some of the sites that will be addressed have been "dangerously polluted for decades."

Biden noted the lakes provide drinking water and support more than one million jobs in manufacturing, tourism, transportation, warehousing, farming and fishing. A 2020 EPA analysis of the Great Lakes found the region supports more than 1.3 million jobs and generates $82 billion in wages annually.

The President quoted Nobel Prize-winning author Toni Morrison, who was born in Lorain, in his speech. The book the President quoted, "Beloved," has been the target of some conservatives trying to ban the book from public school curriculums in Virginia. Biden noted Friday would have been Morrison's birthday -- she died in 2019 -- and said she is one of first lady Jill Biden's favorite authors.

"She once wrote, 'We got more yesterdays than anybody. We need some kind of tomorrow.' Places like Lorain have a lot of proud yesterdays. Now, you're going to have some brighter tomorrows," the President said.

The President made the announcement from the Black River in Lorain, Ohio, a tributary of Lake Erie and one of the 22 areas listed in Thursday's funding disbursement.

"The Great Lakes are a vital economic engine and an irreplaceable environmental wonder, supplying drinking water for more than 40 million people, supporting nearly 1.5 million jobs, and sustaining life for thousands of species," EPA Administrator Michael Regan wrote in a statement shared with CNN on Wednesday. "Through the investments from President Biden's bipartisan infrastructure deal, we will make unprecedented progress in our efforts to restore and protect the waters and the communities of the Great Lakes basin."

Per the EPA, the river earned the nickname "river of fish tumors," "due to its long history of industrial, agricultural, and urban uses, which led to poor water quality, loss of biodiversity, habitat degradation and sedimentation."

"This $1 billion investment will accelerate the cleanup across sites across the Great Lakes Basin, from Duluth, Minnesota, to Buffalo, New York, and everywhere in between, including several major areas of concern in Ohio, where the President will be traveling tomorrow," a senior administration official told reporters Wednesday.

"This accelerated cleanup and restoration effort will deliver environmental health and recreational benefits for communities throughout the region. It will also help revitalize the economy in these communities, like it's doing, and Loraine's Black River waterfront."

Cleaning up degraded waterways is a costly and labor-intensive endeavor, with extensive sediment remediation required. One official estimated that cleanup projects for areas of concern near Milwaukee and Detroit could cost up to $100 million each. Per the administration, the funding will be disbursed in accordance with the White House's Justice40 Initiative, which tasks agencies with ensuring that at least 40% of federal award dollars are directed to those it designates "disadvantaged communities," including cities like Sheboygan, Wisconsin, Buffalo, New York, Lorain and Duluth, Minnesota.

"With this investment, President Biden is delivering major environmental, public health, and economic wins for the Great Lakes region," former New Orleans Mayor Mitch Landrieu, who's tasked with implementing the infrastructure law, wrote in a statement shared with CNN on Wednesday.

"Building a better America requires us to confront legacy pollution and clean up the environment -- ensuring our kids drink clean water and creating good-paying jobs in the process. We know that cleaning up these waterways and improving the health of the Great Lakes will also create great economic opportunities for communities across the eight-state region and beyond."