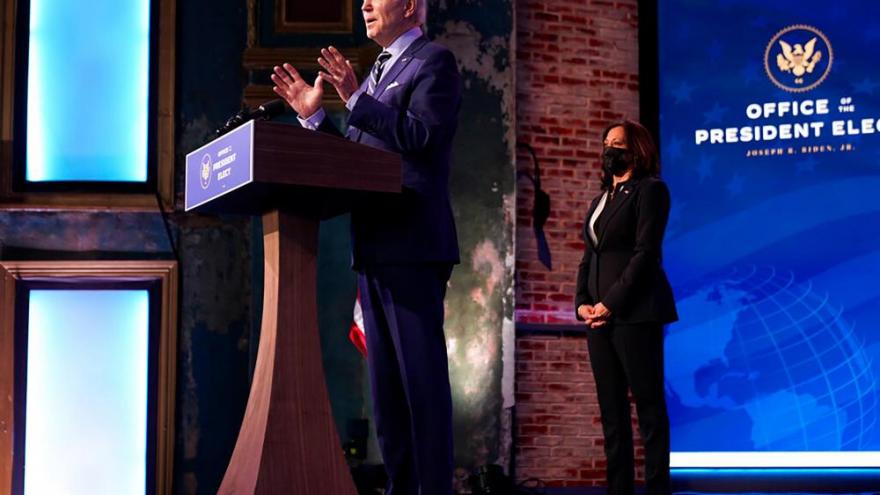 On Joe Biden's first day as President, his White House will issue a memo to halt or delay midnight regulations and actions taken by the Trump administration that will not have taken effect by Inauguration Day, Biden transition spokesperson Jen Psaki told reporters on Dec. 30.

(CNN) -- On Joe Biden's first day as President, his White House will issue a memo to halt or delay midnight regulations and actions taken by the Trump administration that will not have taken effect by Inauguration Day, Biden transition spokesperson Jen Psaki told reporters on Wednesday.

Psaki noted that issuing a regulatory freeze is standard practice for an incoming administration, "but this freeze will apply not only to regulations but also guidance documents -- documents that can have enormous consequences on the lives of the American people."

The memo will take effect after noon ET on January 20, Psaki said, after Biden is inaugurated.

The memo is part of a broader push the Biden transition team has previewed to immediately undo several of outgoing President Donald Trump's policies.

Midnight regulations are federal government regulations created by executive branch agencies in the lame duck period of an outgoing president's administration. Every outgoing president since Jimmy Carter has made a push to finalize new rules in the final lame duck months of their administrations, according to the George Washington University Regulatory Studies Center.

CNN previously reported that Trump's political appointees are planning an array of last-minute federal regulations ahead of Biden's inauguration, including rules that would tighten immigration, make it harder to enforce environmental protections and possibly eliminate food assistance for millions of Americans.

Psaki pointed to a rule that she said the Department of Labor was expected to publish before January 20 "that would make it easier for companies to call their workers independent contractors to avoid minimum wage and overtime protections." She criticized the rule, saying it would make it easier to "misclassify employees as independent contractors" and cost workers money, and said the memo would potentially freeze the rule and not allow it to be implemented.

Biden has also pledged to sign a flurry of executive actions on his first day in office to deliver on campaign promises, including rejoining the Paris climate accord, a landmark international deal to combat climate change that Trump exited in 2017, and rejoining the World Health Organization, which Trump moved to withdraw from this year.

Three weeks from Inauguration Day, Biden still has several key Cabinet and Cabinet-level nominees to announce, including his attorney general, who will be one of the highest-profile members of his administration.

Psaki said that more Cabinet announcements are expected next week, and that none are expected before the New Year. Besides attorney general, Biden has not yet announced his picks for secretary of labor, secretary of commerce, CIA director and small business administrator.

"He is very thoughtful about how he makes the decisions of who he's going to nominate for the Cabinet and any real personnel decisions and we believe he deserves the time and space to make those decisions," Psaki said when asked about why those nominees have not yet been announced.

This week, Biden said his transition team had "encountered roadblocks" from political leadership at the Defense Department and the Office of Management and Budget as his advisers work with the Trump administration.

Biden transition official Yohannes Abraham said Wednesday that it had been 11 days since there was a cessation of meetings and that there had been just three meetings in that time period.

Trump administration officials insisted Biden was stretching the truth when he said during those remarks on Monday that members of his team "just aren't getting all the information that we need." Those officials cited dozens of transition meetings that have occurred since the process officially began last month after a lengthy delay.

But people close to the transition efforts said critical information is being withheld about budgets, US force posture, recently announced troop withdrawal plans and the recent massive cyberattack on US federal agencies and companies that was attributed to Russia.