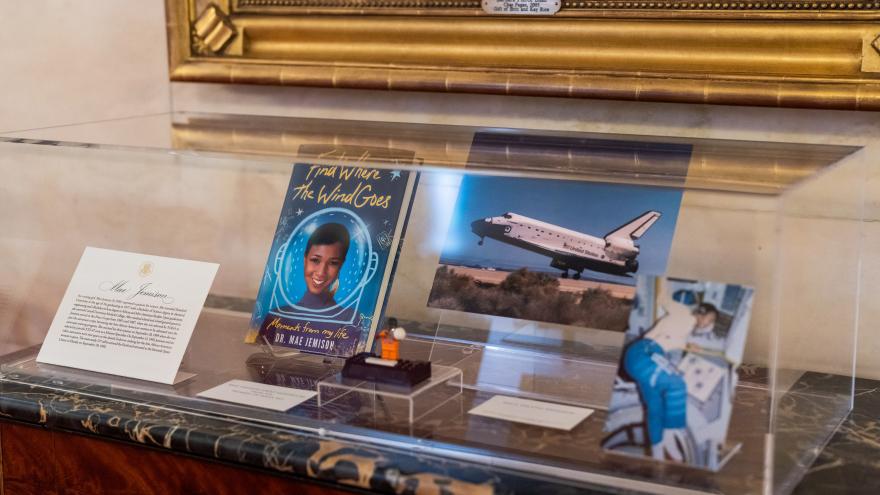 (CNN) -- An exhibit highlighting pioneering Black Americans is on display at the Executive Residence as the Biden administration aims to draw a connection between groundbreaking figures of the past and the historic firsts in the ranks of White House personnel during Black History Month.

The collection, presented by the Office of the First Lady, includes Black Americans who have contributed to the fields of security and national interests, the arts and international relations. Among the works includes a 1967 photo from the Lyndon B. Johnson Presidential Library of Thurgood Marshall sitting next to Johnson prior to the announcement of Marshall's nomination as the first Black Supreme Court justice, as well as the original oath Marshall signed.

Original campaign material from Shirley Chisholm, the first Black woman to be elected to Congress and the first Black candidate to seek a major party's nomination for president of the United States, is also included.

"She just had such strength and such power and such appreciation and love for the community. She led with passion. She led with what she believed in, and didn't let anyone tell her no," said Karine Jean-Pierre, White House principal deputy press secretary, during an exclusive tour of the exhibit with CNN.

Another display includes a celebration of firsts in literature. The focus on the works of Toni Morrison, Dr. Maya Angelou, Rita Dove and Zora Neale Hurston, particularly resonant at a time when books by Black authors like Morrison's Beloved are facing renewed scrutiny amid the debate over how the legacy and impact of racism should be taught in schools across the nation.

"Even during the campaign, and as president, (President Joe Biden) talked about how in our history, we have to talk about the original sins of our country in order to move forward and in order to learn from our mistakes," said Jean-Pierre.

The exhibit also honors firsts in music with a display of Ella Fitzgerald, the first Black artist to win a Grammy Award.

As part of the exhibit honoring spots icons, a Jackie Robinson stamp from the Smithsonian National Postal Museum, issued in 1999 as part of the "Celebrate the Century" series, is included. Robinson was the first African American to be inducted into the Baseball Hall of Fame.

For many years, museums neglected documenting Black history. It's a conversation the museum community continues to work to course correct, said Daniel Piazza, chief curator of the Postal Museum.

"A lot of material was lost over the years. Certainly, what exists is often now in private and in family collections. ... It's long overdue that we're preserving and showing this material," said Piazza.