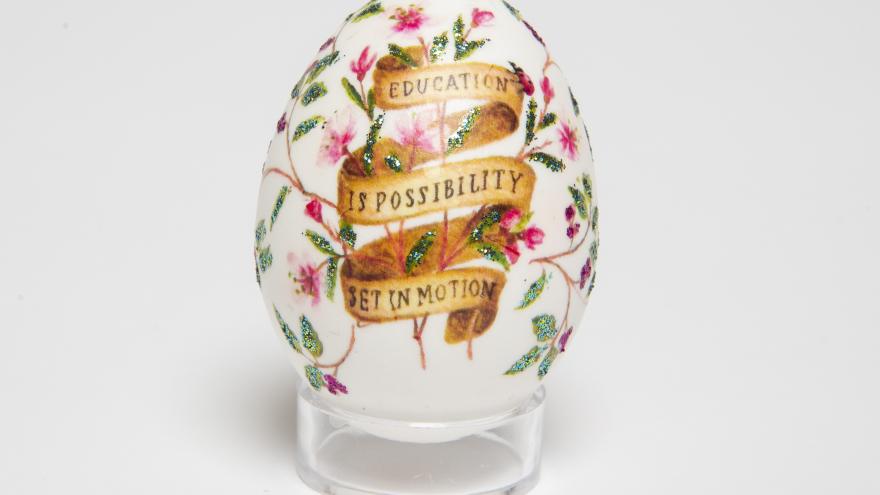 (CNN) -- The plans are hatched, the wooden spoons are procured and 50,000 eggs have been hard boiled and driven to Washington on a refrigerated truck.

It's Easter Egg Roll time at the White House once again.

President Joe Biden and first lady Jill Biden are taking their first crack at the time-honored Easter tradition on Monday, which will mark the 142nd White House Easter Egg Roll following a two-year hiatus due to the Covid-19 pandemic. The theme of the event, the first lady's office says, is "EGGucation," with the South Lawn being "transformed into a school community" for 30,000 visitors to enjoy, including military families from the USS Delaware.

The American Egg Board is donating 90,000 eggs to the event as part of its longtime partnership with the White House, egg board president and CEO Emily Metz told CNN. That includes approximately 50,000 hard-boiled eggs that will be used for the egg roll races with wooden spoons, the egg hunt, and for dyeing and decorating. Those eggs were hard-boiled, dyed and transported from North Carolina to Washington on a refrigerated truck by Braswell Family Farms' John Watson, where they will be stored over the weekend ahead of Monday's festivities.

Forty thousand additional eggs have been donated to be used for food items for guests, Metz said.

The American Egg Board will also present its annual commemorative egg to the first lady, part of a 45-year tradition beginning with the Carter administration. Artist Russ Hagen, a member of the International Egg Art Guild, was selected to paint the 2021 and 2022 commemorative eggs, a months-long undertaking that included a design to match the "EGGucation" theme created by Mary O'Reilly and the inside of a real chicken egg being blown out through a special process, leaving the shell intact, before the decoration could begin.

This year, all 45 eggs that have been presented to first ladies over the years are being displayed together for the first time in a special "Colonnade of Eggs" in the East Wing of the White House for visitors to view on tours.

Getting all of those extremely delicate painted eggs to the White House for the exhibition was a challenge. The safest way to transport a painted egg, Metz told CNN, is to wrap it "very gingerly" in a clean diaper. The diapered eggs are then flown with a member of the egg board to Washington. Most of the 45 eggs are stored at the American Egg Board's headquarters in Chicago, but some of them belong to presidential libraries or the White House Historical Association. Two of the 45 eggs couldn't be tracked down and were replicated for the exhibition.

Biden will be presented with the 2022 egg on Monday, pending its arrival intact. There is a "backup egg" just in case, Metz said, "But the goal is to be very, very careful."

A brief history of the Egg Roll

The egg rolling tradition began in the 1870s on US Capitol grounds. After a particularly rotten 1876 roll in which eyewitness John C. Rathbone observed "the wanton destruction of the grass on the terraces of the park," President Ulysses S. Grant signed legislation to protect Capitol grounds, which prohibited egg rolling, per the National Archives.

But in 1878, a more egg-friendly President Rutherford B. Hayes allowed children to roll their eggs on the White House South Lawn.

According to an article in that evening's edition of the Evening Star, per the National Archives, the children were quite pleased with their new egg rolling headquarters: "Driven out of the Capitol grounds, the children advanced on the White House grounds to-day and rolled eggs down the terraces back of the Mansion, and played among the shrubbery to their heart's content."

Florence Harding dyed the eggs herself in 1921, The Washington Post reported at the time.

In 1927, the Post reported that Grace Coolidge brought her pet raccoon, Rebecca, out on the grounds on a leash, to Rebecca's annoyance.

"The crush was too much for Rebecca and she showed her displeasure plainly. But the first lady was not so easily discouraged. She carried the pet indoors and returned to the delight of the crowd," the report said.

Eleanor Roosevelt oversaw the egg roll during her husband's four terms in office, including 1937, when more than 50,000 children attended. Cold weather was to blame for depressed turnout in 1940, when just under 5,500 children attended, the Syracuse Herald-Journal reported.

During the Obama administration, first lady Michelle Obama used the egg roll to promote her "Let's Move" initiative, and the star-studded lineup included performances by Justin Bieber and Ariana Grande. Beyoncé and Jay-Z were among the attendees in 2016. The Trump administration saw a return to Egg Roll basics, with activity stations, egg and cookie decorating and costumed characters.

To this day, the egg roll remains one of the only times of the year that the White House South Lawn is open to the public -- with tickets -- to enjoy.