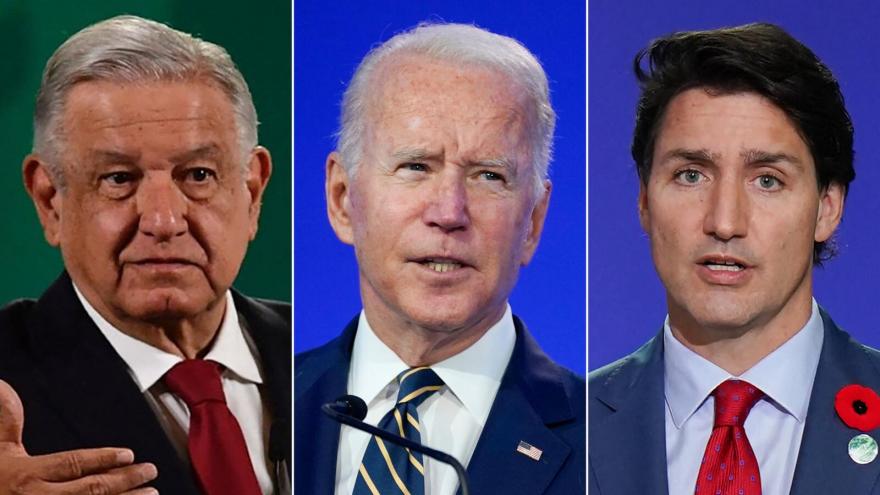 President Joe Biden (Center) plans to focus on migration, the Covid-19 pandemic and economic integration when he convenes a summit of North American leaders at the White House on Thursday.

(CNN) -- President Joe Biden, reconvening a summit of North American leaders at the White House on Thursday, sought cross-border agreement on migration, Covid-19 and economic integration, even as his guests voiced concerns over what they say are protectionist trade policies left over from Biden's predecessor.

"We can meet all of the challenges if we just take the time to speak with one another," Biden said as he met in the East Room with the leaders of Canada and Mexico. "As leaders, we share an innate understanding that our diversity is an enormous strength."

The main sticking points between the men center on Biden's proposed tax credits for American-made electric vehicles, which are included in the major social and climate spending plan currently making its way through Congress. Canada has argued the proposed credits could violate a new North American trade agreement.

The White House holds a different view, and the topic was expected to arise during the lengthy talks between the leaders at Thursday's gathering.

It's the first such summit -- which have come to be known as the "Three Amigos" -- since 2016, reviving a forum shunned by former President Donald Trump. It came a few weeks after Biden reopened US land borders to fully vaccinated travelers, ending a nearly 20-month closure that had caused tensions with both nations.

Before he met jointly with Canadian Prime Minister Justin Trudeau and Mexican President Andrés Manuel López Obrador, Biden sat down with each leader individually to discuss bilateral issues. They did not hold a joint press conference, unlike the previous eight North American Leaders summits held since 2005.

Welcoming Trudeau to the Oval Office, Biden offered praise for what he called "one of the easiest relationships you can have as an American president, and one of the best."

With López Obrador, Biden hailed the two nations' "different and emerging relationship, that is borne out of mutual respect."

"Mr. President," Biden went on, "we no longer use language like 'Our friends from the South.' You are an equal, we're equal countries, and that's what I like about you."

All three leaders entered the talks hoping for a more united front on economic and security matters as global competition from China and other regions scales up. Supply chain disruptions have heightened the nations' desire to create more resilient manufacturing at home.

The leaders were planning to announce a new group focused on supply chain resiliency, pledge to reduce emissions like methane and reaffirm support for labor protections included in the US-Mexico-Canada trade deal signed during the Trump administration.

The leaders also hope to rebuild relationships that had gone dormant in the previous administration, including a high-level security dialogue.

Yet as Biden works to promote the landmark infrastructure law he signed this week, some of the provisions included in a larger climate and social spending plan are causing consternation among the United States' neighbors.

Pressed by reporters, Biden said alongside Trudeau the two leaders were "going to talk about" tax incentives for electric vehicles, but pointed out the provision "hasn't even passed the House yet."

During a daily White House press briefing, the President's press secretary, Jen Psaki, said the proposed electric vehicle tax credit "is an opportunity to help consumers in this country."

Migration was another central topic of discussion, though ahead of time Biden's advisers said the focus would be on developing a regional approach to the issue and not specifically about the US southern border.

One official said Biden hoped to "lock arms" with Canada and Mexico to address displacement issues they acknowledge will not wane anytime soon. They hope to address root causes like lack of job opportunities and the effects of climate change.

Other issues have caused some tension among neighbors, including Enbridge's Line 5 oil pipeline, which the state of Michigan wants to shut down, and Mexico's overhaul of its electricity industry.

But the leaders still put on a cooperative face as the "Three Amigos" format was restored, including an announcement on Covid-19 vaccine donations. Earlier this year, the United States lent doses to both countries, and on Thursday they "returned" them by donating millions of vaccines to countries in the Western Hemisphere.

They also agreed to build on efforts to compile regional pandemic preparedness plans and discuss the best ways to distribute the Covid-19 vaccine in Latin America.