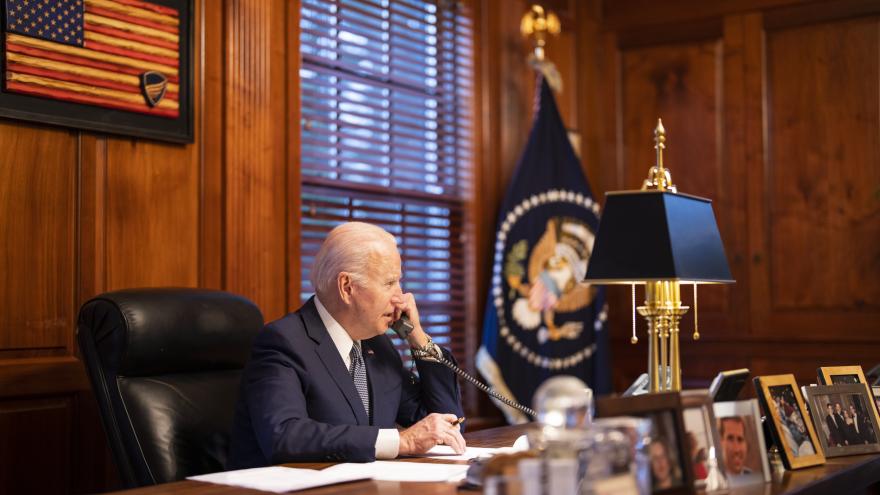 By Maegan Vazquez, Jasmine Wright and Donald Judd, (CNN) -- President Joe Biden warned Russian President Vladimir Putin that the US and its allies will respond "decisively and impose swift and severe consequences" on Russia should Putin decide to invade Ukraine.

In a roughly hour-long phone call, the White House said Biden made clear to Putin what he would be risking with an invasion.

"President Biden was clear that, if Russia undertakes a further invasion of Ukraine, the United States together with our Allies and partners will respond decisively and impose swift and severe costs on Russia. President Biden reiterated that a further Russian invasion of Ukraine would produce widespread human suffering and diminish Russia's standing," the White House says, adding Biden "was clear with President Putin that while the United States remains prepared to engage in diplomacy, in full coordination with our Allies and partners, we are equally prepared for other scenarios."

The call between the two leaders comes hours after the US moved some of its forces out of Ukraine and ordered the evacuation of most of its embassy staff on Saturday as fears mount that a Russian invasion of the country could take place in the next few days. The moves were yet another sign that the US fears Putin could order an invasion at any time, just one day after Biden's national security adviser warned Americans in Ukraine to leave and that military action could begin with an aerial bombardment that could kill civilians.

Ahead of the calls, the Russian Ministry of Foreign Affairs accused Western countries and the press of spreading a "large-scale disinformation campaign" about an allegedly impending Russian invasion of Ukraine "in order to divert attention from their own aggressive actions."

"At the end of 2021 and the beginning of 2022, the global information space faced a media campaign unprecedented in its scale and sophistication, the purpose of which is to convince the world community that the Russian Federation is preparing an invasion of the territory of Ukraine," the Ministry said in a statement published on its website.

Putin and Biden last spoke on the phone late last year. Prior to that, on December 7, they had negotiations via video-conference. The first face-to-face meeting between Putin and Biden as heads of state took place in Geneva in June 2021.

The Russian President has also engaged a series of Western leaders in talks that have so far appeared fruitless in defusing the situation.

Putin's weekend phone calls follow several warnings on Friday by American and European officials, who expressed concern for the security of Europe and the safety of their citizens in Ukraine.

The US has estimated that Russia has more than 100,000 troops near the Ukraine border, with thousands added just this week, according to an administration official.

Biden, who is spending the weekend at Camp David, took part in a virtual meeting from the White House on Friday with leaders from Canada, the United Kingdom, France, Germany, Italy, Poland, Romania, NATO, the European Commission and the European Council to discuss escalating tensions.

Following the call, Biden's national security adviser, Jake Sullivan, appeared before the press saying that though Putin hasn't decided whether to act, there is a "very distinct possibility" Russia could swiftly engage in a major military action.

Sullivan warned that a Russian assault on Ukraine could begin soon, beginning with aerial bombings and missile attacks. He advised all Americans in Ukraine to depart the country for their own safety as quickly as possible.

"We obviously cannot predict the future, we don't know exactly what is going to happen. But the risk is now high enough and the threat is now immediate enough that this is what prudence demands," he said.

Along with the US, several other countries are calling for their citizens to leave Ukraine immediately as well.

The Biden administration is discussing the possibility of pulling other US government employees out of Ukraine. On Friday, a British diplomat told CNN that the British Embassy in Kyiv is "temporarily removing all nonessential staff and dependents" and "a core team will remain to continue with essential duties."

A senior defense official told CNN that Defense Secretary Lloyd Austin had ordered 3,000 more soldiers from the 82nd Airborne Division to deploy to Poland, joining the 1,700 already there. The soldiers are there to help Americans who may try to leave Ukraine.

In Ukraine's capital, Kyiv, Mayor Vitali Klitschko outlined preparations the city is taking to safeguard "critical and social infrastructure facilities" in "the event of a possible emergency."

In the statement issued on Telegram ahead of the weekend, Klitschko said, "Our efforts are aimed at preventing or overcoming both possible provocations and withstanding a military attack."

Klitschko said efforts included generating additional electricity production and creating fuel reserves, as well as organizing the forces for the territorial brigade to defend the city. He also outlined the current state of shelter structures in the city and said evacuation commissions are also being set up.

"Electric generators have been installed for uninterrupted operation in the emergency situation of the city management systems and thermal power plants of the capital for a period of up to 10 days. Businesses have a guaranteed uninterrupted connection in the absence of mobile communications and the Internet," the statement said.