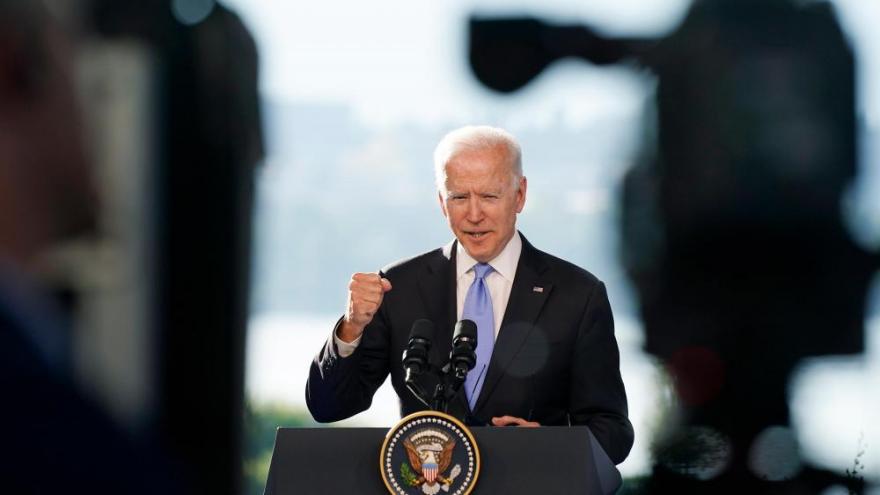 President Joe Biden said he warned Russian President Vladimir Putin on June 16 of consequences if jailed Russian opposition leader Alexey Navalny were to die in prison, though he declined to specify which actions he would take.

(CNN) -- President Joe Biden said he warned Russian President Vladimir Putin Wednesday of consequences if jailed Russian opposition leader Alexey Navalny were to die in prison, though he declined to specify which actions he would take.

"I made it clear to him that I believe the consequences of that would be devastating for Russia," Biden said.

He continued, "What do you think happens when he's saying it's not about hurting Navalny, all the stuff he says to rationalize the treatment of Navalny, and then he dies in prison?... It's about trust. It's about their ability to influence other nations in a positive way."

The State Department has said the US believes Navalny was poisoned by the Russian security services last year when he felt ill during a flight to Moscow and fell into a coma. Navalny was evacuated to Berlin after being hospitalized. That evacuation later led the Russia Federal Penitentiary Service to accuse Navalny of violating the terms of his probation by failing to show up for scheduled inspections while in getting medical care in Germany. Following his return to Russia in February, Navalny was sentenced to prison, where he remains.

This past spring, Navalny went on a hunger strike to protest against prison officials' refusal to grant him access to proper medical care. During his time in prison, Navalny's supporters have said the opposition leader's health deteriorated and his legal team has said his condition was exacerbated by alleged "torture by sleep deprivation."

Biden, who has posed autocracy versus democracy as a central theme of this moment, suggested he raised human rights extensively with Putin during the Geneva summit.

"I also told him that no president of the United States could keep faith with the American people if they did not speak out to defend out democratic values, to stand up for the universal and fundamental freedoms that all men and women have in our view," he said.

Biden also said he specifically discussed "concerns" about Navalny, and that he also raised the case of two imprisoned American citizens, Paul Whelan and Trevor Reed. Additionally, Biden said he emphasized the ability of Radio Free Europe to operate, as well as "the importance of a free press and freedom of speech."

Asked about the Russian crackdown on Navalny's organizations and supporters, Putin responded during his earlier solo news conference in Geneva by talking about the Black Lives Matter demonstrations across the United States and the January 6 Capitol attack.

"We sympathize with what is happening in the states, but we do not wish that to happen in Russia," Putin said.

Putin said Navalny returned to Russia in order to be detained, knowing he had broken the law, but refused to say the opposition activist's name aloud.

"This man knew that he was breaking the law of Russia. He has been twice convicted," Putin said.

He repeated the official Russian position that Navalny had violated bail conditions by going abroad while unconscious after apparent Novichok poisoning last year, and failing to check in with Russian legal officers as required.

"He consciously ignored the requirements of the law," Putin said. "The gentleman in question went abroad for treatment. As soon as he went to the hospital he showed his videos on the internet. ... He wanted consciously to break the law. He did exactly what he wanted to do. So what kind of discussion can we be having (about him)?"