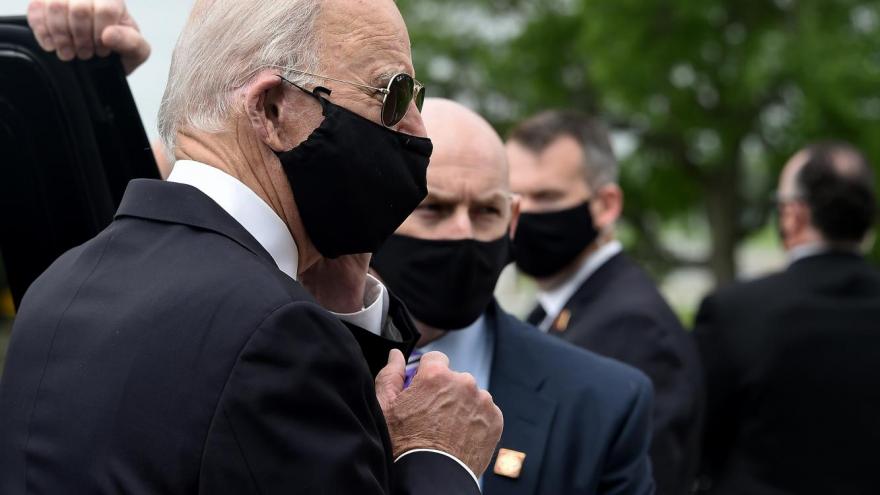 (CNN) -- Joe Biden's campaign is debuting its first general election television ad in Texas on Tuesday, dipping its toes in a state long considered a Republican stronghold and one that's seen an uptick in Covid-19 cases in recent weeks.

The minute-long coronavirus-focused spot, titled "Tough," is part of a new mid-six figure broadcast and digital advertisement buy, a Biden campaign official said, with state customized ads slated to run in Arizona, Florida, North Carolina, as well as Texas -- all states that have seen recent rises in coronavirus cases. The spot makes no mention of President Donald Trump by name, but Biden advisers intend for the ads to draw a stark contrast with the President's handling of and messaging around the coronavirus pandemic.

"I'm thinking of all of you today across Texas. I know the rise in case numbers is causing fear and apprehension. People are frightened. They're especially worried about their parents, their grandparents, loved ones who are most at risk," Biden says in the spot that will air in the Lone Star State.

Looking directly into the camera, the presumptive Democratic nominee says, "This virus is tough, but Texas is tougher."

The "Tough" ads in Arizona, Florida and North Carolina will feature images and messages tailored to each state. In each of the ads, Biden encourages people to take specific steps -- including wearing masks, hand washing and social distancing -- to help stop the spread of the virus that has so far claimed the lives of more than 135,000 Americans as of Monday night.

"We can stop the spread but it's up to all of us to do it. We have to step up and do both the simple things and the hard things to keep our families and our neighbors safe. Wear a mask. Wash your hands. Stay home if you can and socially distance when you go out," Biden says.

"I want every single American to know -- if you're sick, if you're struggling, if you're worried about how you're going to get through the day, I will not abandon you," Biden says. "We're all in this together. We'll fight this together, and together we'll emerge from this stronger than we were before we began."

The spot ends with a photo of Biden wearing a black mask next to the words, "Stay safe wear a mask."

The ads mark the Biden campaign's latest attempt to draw a contrast with Trump, who until this weekend had refused to wear a mask in public. Over the past several months, Biden has railed against the President's handling of the coronavirus pandemic on both the public health and economic fronts.

In a speech outlining his economic recovery plan last week, Biden called Trump "the exact wrong person to lead at this moment. He will not bring this country together -- he's determined to drive us apart and keep his base in place."

The new ad push comes as recent polls have shown Biden is competitive with the President in states Trump won in 2016. Over the weekend, CBS/YouGov polls of likely voters in Arizona and Texas showed no clear leader in those states, with Biden and Trump tied at 46% in Arizona and in Texas, Trump at 46% and Biden at 45%, well within the margin of error. A CBS/YouGov poll of likely voters in Florida showed Biden leading Trump by six points.

The ads will air in each of the state's top markets, on local cable and on Sunday cable shows, a Biden campaign official said. They will run Spanish-language captioned versions of the spot in Arizona, Florida and Texas on YouTube, Facebook and Univision. The campaign also plans to release digital videos of Biden calling families in these states later this week.