Biden vowed to end the death penalty. Activists are demanding action as he nears the 100-day mark 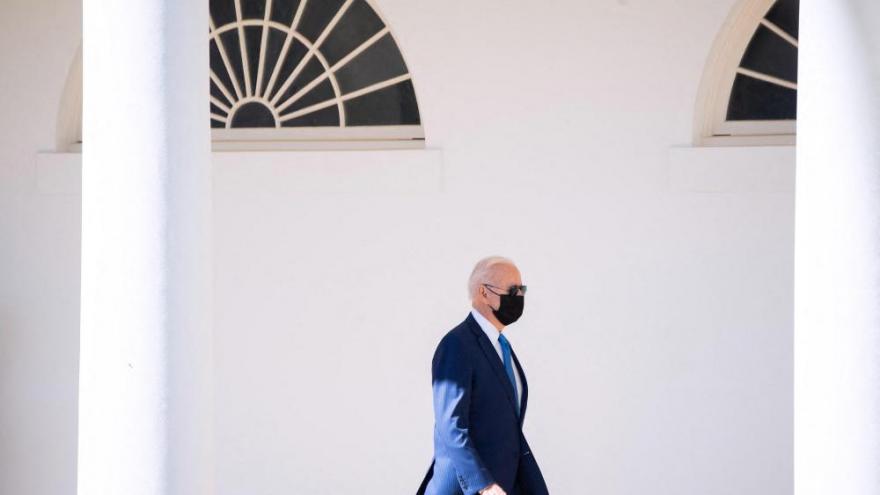 As President Joe Biden nears the milestone of his first 100 days in office, anti-death penalty advocates are growing frustrated with his silence and inaction on a campaign promise to end capital punishment.

(CNN) -- As President Joe Biden nears the milestone of his first 100 days in office, anti-death penalty advocates are growing frustrated with his silence and inaction on a campaign promise to end capital punishment.

While there haven't been any federal or state executions since Biden took office, about 2,500 men and women sit on death row in federal and state prisons across the country -- and advocates say that, in the absence of an executive order from the White House, a state can at any moment schedule executions or the Justice Department can decide to calendar a federal inmate's death date.

Biden's plan to strengthen America's commitment to justice included a promise to pass legislation eliminating the death penalty on the federal level and to "incentivize states to follow the federal government's example. These individuals should instead serve life sentences without probation or parole."

During Biden's first 100 days in office, he has signed executive orders to reverse his predecessor's policies, signed a major economic stimulus bill and ramped up Covid vaccination rates. Virginia Democrats enacted legislation in March abolishing the state death penalty -- the 23rd state, but the first southern one, to do so -- yet Biden has remained focused on other agenda items.

The President has not directly addressed the death penalty since taking office -- though White House Press Secretary Jen Psaki said in March that Biden continues to have "grave concerns" about the practice.

"President Biden made clear, as he did on the campaign trail, that he has grave concerns about whether capital punishment, as currently implemented, is consistent with the values that are fundamental to our sense of justice and fairness," Psaki said after the Supreme Court agreed to review a death penalty case involving the Boston Marathon bomber.

CNN reaching out to the White House for further comment and received the same statement from Psaki.

Abolishing the death penalty statute through Congress would prevent a future administration from restarting federal executions -- as former President Donald Trump did -- but members of Congress, former and current law enforcement as well as civil and human rights groups are urging Biden to use his executive pen to pause the federal death penalty.

"There are mounting calls from criminal justice, law enforcement and other leaders for the President to seize this moment as an increasing number of governors in states like Virginia have moved in the direction to abolish the death penalty," said Miriam Krinsky, the executive director of the legal advocacy group Fair and Just Prosecution, one of dozens of legal organizations that sent letters to Biden urging him to take immediate action. "The death penalty should end in the federal landscape once and for all and in a way that can't be resurrected by a future administration."

Former Attorney General William Barr lifted a moratorium on the federal death penalty in July 2019, setting off a cascade of lethal injection executions -- 13 in total -- at the Terre Haute, Indiana, federal prison. Lawmakers, anti-death penalty advocates and celebrities unsuccessfully lobbied Trump to put a stop to the proceedings.

In response, Massachusetts Rep. Ayanna Pressley sponsored a bill to abolish the death penalty, commute death row inmates' sentences to life without the possibility of parole and to destroy death chambers in prisons. The bill languished but was reintroduced in January and has been referred to committee.

Biden's Attorney General Merrick Garland reaffirmed at his confirmation hearings in February that the new administration is committed to reversing Trump's approach. "The data is clear that it has been enormously disparate impact on Black Americans and members of communities of color, and exonerations also that something like half of the exonerations had to do with Black men. So all of this has given me pause," Garland said.

Garland went on to add that he expected Biden to give direction on the death penalty or it will be likely they would return to the Justice Department's previous policy, under which the Federal Bureau of Prisons would not be ordered to schedule any federal executions.

The President only has the power to pause the federal death penalty, according to Daniel S. Medwed, a University Distinguished Professor of Law and Criminal Justice at Northeastern University.

"He can't do much about the state death row cases, that's up to the governors and legislators -- but he could sweep death row clean by commuting all sentences from death to life without the possibility of parole," Medwed told CNN.

With movement on pending death penalty cases in the Supreme Court, through the Justice Department and in Arizona, where state Attorney General Mark Brnovich set execution dates for two death row inmates after a seven-year hiatus, advocates are questioning why Biden's administration hasn't initiated steps to stop the death penalty.

"I don't think citizens want the death penalty anymore or a moratorium. Now, it's a matter of dismantling the system so it cannot come back and function in a knee jerk reaction where 13 people can get executed like under Trump," one exoneree, Fernando Bermudez, told CNN. "Biden cannot continue that legacy."

Bermudez wrongfully served 18 years in a New York prison for a 1991 homicide and since his release, he has devoted his life to abolishing the death penalty. Bermudez is "disappointed" that Biden hasn't taken a small measure of action by now.

"Getting rid of the death penalty is very important because there's always the grave risk that an innocent person can be convicted," said Bermudez, 52. "It's a matter where people who are on death row can be executed by mistake. But also, I think it's a matter of the misapplication of the law and that the death penalty has been proven not to work to deter or prevent crime the way people hoped it would."

Kwame Ajamu, a death row exoneree, told CNN in a previous interview that "capital punishment is the worst thing we can do to each other as human beings." Ajamu, along with other death row exonerees, told their stories in National Geographic's March issue and have also cosigned a letter along with over 220 organizations to Biden calling to abolish the death penalty.

The Death Penalty Information Center reported in February that 185 people who received death sentences since the 1970s had been wrongfully convicted and exonerated. The nonprofit research organization, which does not take a stance on the practice, also found that of the 1,532 people executed since 1976, 20 men had "strong evidence of innocence."

What Biden can do without Congress

Kent Scheidegger, the legal director for The Criminal Justice Legal Foundation, said that even if Biden exercised his power to grant commutations to everyone on death row, it would include Dzhokhar Tsarnaev, the convicted Boston Marathon Bomber, and "would come with great resistance." The CJLF is a nonprofit organization that advocates for equal justice for victims of crimes including pursuing the death penalty.

Yet even some of Tsarnaev's victims have called for clemency.

"I don't want someone killed in my name," Mikey Bogart, a Boston Marathon bombing survivor, wrote in a statement after the Supreme Court decided in March to review whether to reinstate Tsarnaev's death sentence. "I hope the Biden Administration will reconsider pursuing a death sentence. Mr. Tsarnaev will spend the rest of his life in prison no matter what."

A White House official told CNN that Biden believes that the Justice Department "should return to its prior practice, and not carry out executions," but did not specify if that would be through a moratorium or through abolition.

Robert Dunham, the executive director of the Death Penalty Information Center, said that any executive moves would be open to reversal by future presidents -- but added that Biden likely doesn't have sufficient support in Congress to move legislation.

He noted that Biden could also influence state executions by ordering the Food and Drug Administration and the Drug Enforcement Administration to enforce laws surrounding drugs used for executions -- something that defense attorneys have called for.

"The Biden administration can simply instruct the federal agencies to do their job, it can make it significantly more difficult for states to carry out executions," Dunham said.