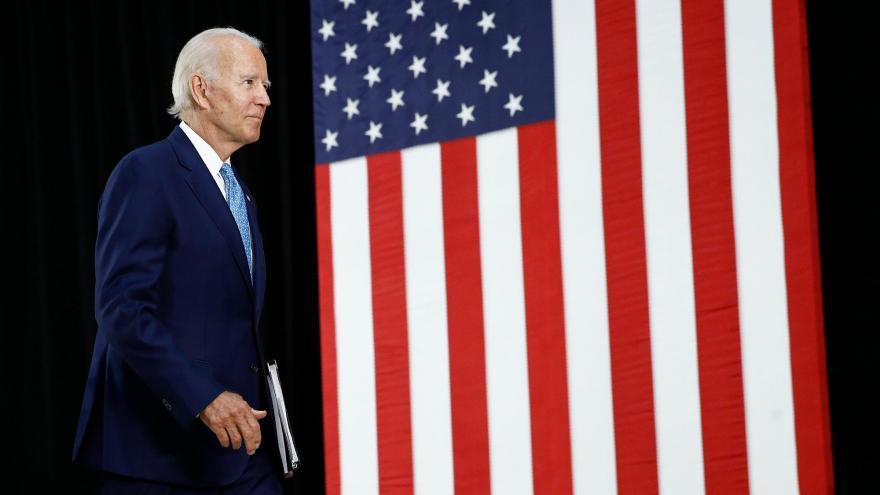 The former vice president delivered a speech outside his childhood hometown of Scranton, Pennsylvania, as he launched what his campaign is calling its "build back better" agenda, which Biden said would pump federal dollars into purchasing and research and development "in a way not seen since the Great Depression and World War II."

Other plans his campaign said will be detailed in the coming weeks include clean energy, the "caregiving economy," such as child-care and domestic workers, and racial equity.

"Throughout this crisis, Donald Trump has been almost singularly focused on the stock market -- the Dow and the Nasdaq. Not you and not your families," Biden said. "If I am fortunate enough to be your president, I'll be laser-focused on working families, middle-class families like I came from here in Scranton, not the wealthy investor class. They don't need me; working families do."

The push comes as Biden, who has benefited in recent weeks from being seen as the lone alternative to President Donald Trump, seeks to define his own agenda and offer a path to recovery from the economic blows delivered by the coronavirus pandemic.

Still, Biden on Thursday contrasted himself with Trump -- pointing out that, after the death of his first wife and daughter in 1972, he had been a single parent while using the setting near Scranton to connect with his family's working-class roots.

"Growing up rich and looking down on people is a bit different than how I grew up here," Biden said.

He called Trump "the exact wrong person to lead at this moment. He will not bring this country together -- he's determined to drive us apart and keep his base in place."

The planned rollouts put Biden on a course to have detailed the core of his agenda ahead of the Democratic National Convention, which begins August 17 in Milwaukee, Wisconsin.

It stops well short of policies advocated by some leading progressives, such as a Green New Deal and a jobs guarantee. Instead, Biden -- who won the Democratic primary on a moderate platform -- is embracing portions of some of his former rivals' proposals.

Biden's "buy American" proposal includes a planned $400 billion in new spending over four years. In a fact sheet previewing Biden's speech, his campaign said that spending would be focused on clean vehicles, steel and other building materials for infrastructure improvements, telecommunications equipment, and medical supplies to replenish the nation's stockpiles.

That proposal to use federal government procurement to jump-start manufacturing within the United States builds on a plan Massachusetts Sen. Elizabeth Warren had offered -- hers focused more narrowly on clean energy -- during the Democratic presidential primary.

Biden would also tighten rules around which products can be stamped "made in America," and would restrict companies that receive federal research and development funding from then manufacturing the products created as a result of that funding overseas.

He is also proposing $300 billion in additional spending on research and development on technologies from "electric vehicle technology to lightweight materials to 5G and artificial intelligence -- to unleash high-quality job creation in high-value manufacturing and technology."

Biden's campaign said the plan would bring back jobs lost amid the coronavirus pandemic and would create 5 million additional jobs.

"Biden's comprehensive manufacturing and innovation strategy will marshall the resources of the federal government in ways that we have not seen since World War II," his campaign said in a fact sheet detailing his proposal.

In a release Thursday detailing Biden's agenda, his campaign also said he will seek to raise the minimum wage to $15 per hour and end lower minimum wages for tipped workers and those with disabilities.

The campaign also said Biden would reverse some of Trump's tax cuts for corporations and enact "common-sense tax reforms that finally make sure the wealthiest Americans pay their fair share."

It said Biden's caregiving economy plan will include efforts to make child care more affordable and increase pay and benefits for professional caregivers.

And, it said Biden's plan for racial equity will aim to close the racial wealth gap, expand affordable housing and invest in Black, Latino and Native American entrepreneurs.