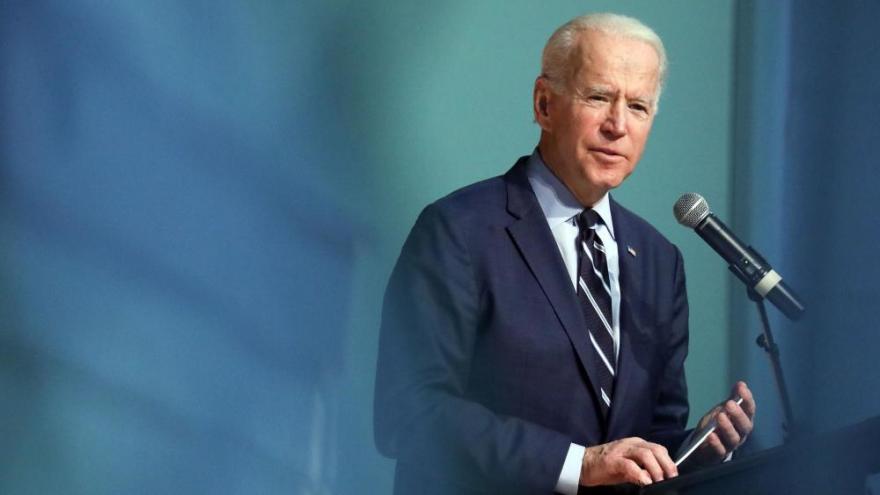 (CNN) -- Presumptive Democratic presidential nominee Joe Biden on Tuesday proposed new tax credits for those who care for children, seniors and disabled people and said he would build tens of thousands of new child-care facilities as part of a plan to bolster what his campaign called the "caregiving economy."

Biden detailed his plan in a speech Tuesday afternoon in New Castle, Delaware. It's the third plank of the "build back better" economic platform the former vice president is rolling out in advance of next month's Democratic National Convention.

Biden's plans -- which have included manufacturing and clean energy, and are also expected to include a future speech on how he would address racial injustice in the economy -- have been offered as economic stimulus programs that would restore jobs lost during the coronavirus pandemic and add millions more on top of those losses.

Biden's campaign said the plan would cost $775 billion over 10 years. Biden would pay for it by repealing tax breaks for real estate investors who earn more than $400,000 and, according to a campaign document, "taking steps to increase tax compliance for high-income earners."

Of that, $450 billion would go to clearing a waiting list for Medicaid home and community services that, citing Kaiser Family Foundation data, Biden's campaign said numbers more than 800,000 and can last as long as five years.

Once the backlog is cleared, Biden's campaign said, he would propose allowing states to scrap their existing Medicaid home- and community-based care service waivers -- which allow people to receive long-term care in their homes rather than institutional settings -- in favor of a new program with more federal funding.

Biden's plan also covers early childhood education. He is proposing $8,000 tax credits for families with one child and $16,000 credits for those with two or more children making up to $125,000 per year. Those earning too much to qualify for the full credit, but less than $400,000 per year, would receive partial credits.

Biden's plan also includes an alternative to tax credits. Families earning up to 1.5 times their state's median income could instead have their child care subsidized so that they are paying no more than 7% of their income.

The plan also calls for all 3- and 4-year-olds to have access to free pre-kindergarten. And it promises to expand access to after-school, weekend and summer care to families with children.

"This is about easing the squeeze on working families that are raising their kids and caring for aging loved ones. And it's about creating jobs with better pay and career pathways for caregivers and showing them the dignity and respect they deserve," the presumptive Democratic nominee said of his plan.

In an effort to make child care more widely available, Biden's plan would offer businesses a credit worth half the first $1 million in construction costs to add a child care facility to their existing facilities.

Without offering specifics, the plan also calls for increased pay for early childhood educators and caregivers. The plan points to his proposed "public option" -- a government-run health insurance program -- allowing those who enroll to receive 12 weeks of paid family leave and seven days of paid sick leave.

In a document detailing the plan, Biden's campaign also called on President Donald Trump and Congress to take urgent action to keep child care centers that have had to shutter amid the pandemic open long-term.

On Tuesday, Biden lambasted Trump's handling of the coronavirus pandemic and the job losses it has caused.

"For all his bluster about his expertise on the economy he's unable to explain how he'll actually help working families hit the hardest," Biden said. "He's quit on you. He's quit on this country."

This story has been updated with Biden's speech outlining his plan.