Biden pledges to support communities ravaged by Hurricane Ida: 'I promise to have your backs until this gets done' 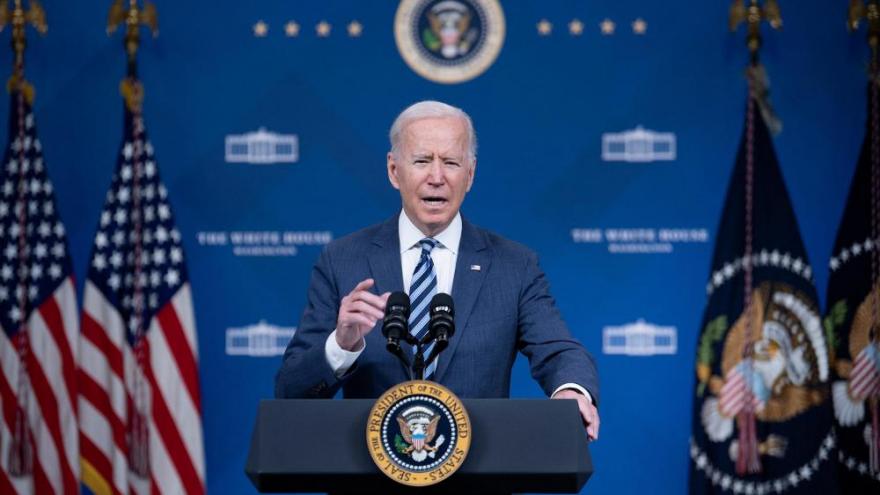 President Joe Biden is headed to Louisiana on Sept. 3 to survey damage from Hurricane Ida, after almost a week of the deadly storm ravaging the eastern half of the United States.

(CNN) -- President Joe Biden headed to Louisiana on Friday to survey damage from Hurricane Ida, after almost a week of the deadly storm ravaging the eastern half of the United States.

In LaPlace for a meeting at the St. John the Baptist Parish Emergency Operations Center, Biden said he was there "to listen."

"I think what we're all seeing, and I'm getting the same response from my Republican friends here that are in the Congress, is that there's nothing political about this. It's just simply about saving lives and getting people back up and running, and we're in this together. And so we're not going to leave any community behind, rural, city, coastal, and I promise to have your backs until this gets done," Biden said.

"Things have changed so drastically in terms of the environment. We've already crossed certain thresholds. We can't build back roads, highways, bridges, anything to what it was before. We gotta build back to what it is now, what's needed now," Biden said. "And I know the heads of the energy companies understand this really well. We have a significant piece of legislation, both the infrastructure bill and a budget thing, a reconciliation bill, that calls for significant investment in being able to deal with what is about to come."

Since the Category 4 hurricane plowed through the Gulf Coast over the weekend, there have been at least five confirmed deaths tied to the hurricane in Mississippi and Louisiana. Entire neighborhoods were windswept, flooded and damaged.

More than 800,000 homes and businesses in Louisiana remained without power on Friday, according to PowerOutage.US. And it could take weeks for power to be restored in some places, officials have said.

There are also gas shortages in Louisiana -- a critical region for the US' oil production and distribution -- leading residents to wait hours at the pump in high temperatures.

Ida's damage didn't stop in the Gulf and the Deep South.

In the last few days, the storm pummeled the East Coast, triggering flash floods and tornadoes across the Northeast. There have been at least 45 deaths in Maryland, New York, New Jersey, Pennsylvania, and Virginia caused by floods.

Biden has emphasized his administration's deployment of federal resources to affected areas and his daily briefings on the storm. Most recently, on Thursday morning, the President highlighted several steps the federal government is taking to prevent the risk of gas shortages and price increases in the wake of the storm. And Thursday afternoon, the Biden administration announced it would be releasing 1.5 million barrels of crude oil from America's emergency stockpile of oil as Louisiana's gas crisis worsens.

Managing hurricanes has become a key test for presidents seeking to convey competence. Previous storms, including Hurricane Katrina in 2005 and Hurricane Maria in 2017, have strained federal resources and reflected poorly on the White House.

The Biden White House has acknowledged it faces two, if not more, natural disasters exacerbated by climate change across the country.

While a hurricane and destructive floods faced the eastern half of the United States, the Caldor Fire in the West has torched nearly 200,000 acres in California.

Biden's trip to Louisiana, his second to the state since coming into office, comes as he appears to face multiple domestic and international crises.

The visit to the Gulf is happening three days after the US' full withdrawal from Afghanistan, a chaotic airlift operation that left Afghans and American service members dead. And the US also continues to contend with the coronavirus, the emergence of the highly contagious Delta variant, and the pandemic's impact on the economy.

Biden's approval rating, meanwhile, is at its lowest point in his presidency.

This headline and story have been updated to reflect Biden's visit.