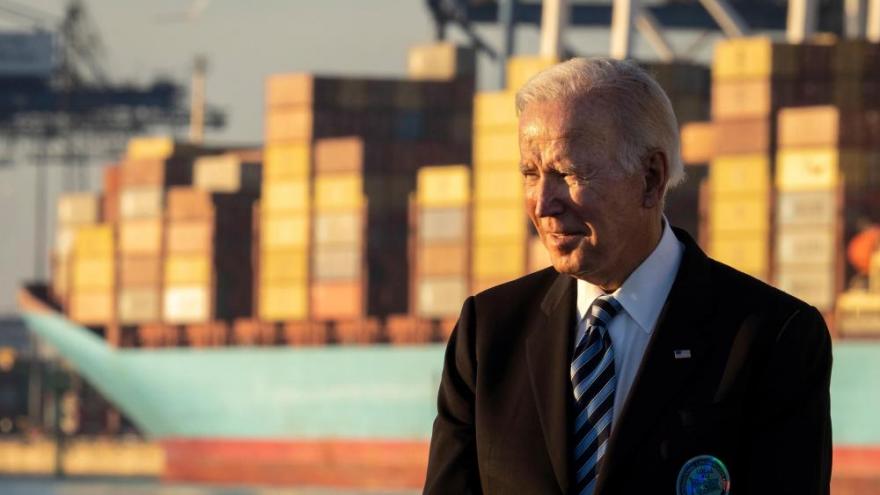 U.S. President Joe Biden speaks about the recently passed $1.2 trillion Infrastructure Investment and Jobs Act at the Port of Baltimore on November 10, 2021 in Baltimore, Maryland.

(CNN) -- President Joe Biden traveled to Detroit on Wednesday to tout the electric vehicle provisions of the recently signed bipartisan infrastructure law, making the case that his plan is a way to compete with China's stronghold in the electric vehicle market and boost domestic supply chains.

"For most of the 21st century we led the world by a significant margin because we invested in our people. We invested in ourselves. But something went wrong along the way. China and the rest of the world are catching up. Well, we're about to turn that around in a big, big way," Biden said during remarks at General Motors' Factory ZERO electric vehicle assembly plant.

Biden specifically made the case in remarks that the auto industry in Detroit is working to set a new pace for electric vehicles, months after GM announced it hopes to produce only zero-emission vehicles by 2035. He also argued that the US is now on its way to beating China in the global race to investing in the future of electric vehicles.

"Up until now, China's been leading in this race. That's about to change because this law next year, for the first time in 20 years, in which American infrastructure investment will be far greater than China's," the President continued, later adding that "we're going to make sure that the jobs of the future end up here in Michigan and not halfway around the world."

Speaking more broadly about America's global leadership, the President said, "We don't have to hurt any other nation," but "we have to get back in the game."

The President also celebrated recent the dramatic government revisions showing job growth was actually much stronger between June and September than previously estimated.

"What we found out today was when they looked back at the last four months, we actually created 710,000 more jobs than previously reported on top of the 5.6 million we already created and had been counted," Biden said. "So, it's good news that Americans are working and wages are up as well."

The Michigan visit marks his second stop to promote the passage of the bipartisan infrastructure law.

Though Democratic Rep. Rashida Tlaib, whose district includes part of Detroit and its suburbs, got a shoutout from Biden during his speech, she wasn't invited to join him aboard Air Force One. Tlaib was one of six House Democrats to vote against the infrastructure bill.

"She was not invited to fly with the President," one senior Michigan Democratic official told CNN of Tlaib, with a second official confirming that she had not been asked to join the White House delegation.

A White House official said invitations were extended only to "Detroit-area representatives who voted for the infrastructure bill." Michigan's five other House Democrats and the state's two Democratic senators flew with the President and his contingent on Air Force One.

During his visit to the plant, Biden toured and test drove the 2022 GMC Hummer EV.

The bipartisan infrastructure measure includes $7.5 billion to build a nationwide network of plug-in electric vehicle chargers, an initiative Biden promoted throughout his presidential campaign. The law also provides an additional $7.5 billion for zero- and low-emission buses and ferries, with the White House saying it will deliver thousands of electric school buses to school districts nationwide.

The President also discussed how his economic agenda will create jobs, including employing members of the IBEW and other unions to build electric vehicle charging stations.

The President's visit to Michigan marked his second trip to a battleground state in as many days as he looks to sell the bipartisan infrastructure law amid his low approval ratings and ahead of the 2022 midterm elections when Democrats are looking to defend their narrow majority in the House.

This headline and story have been updated with additional developments Wednesday.