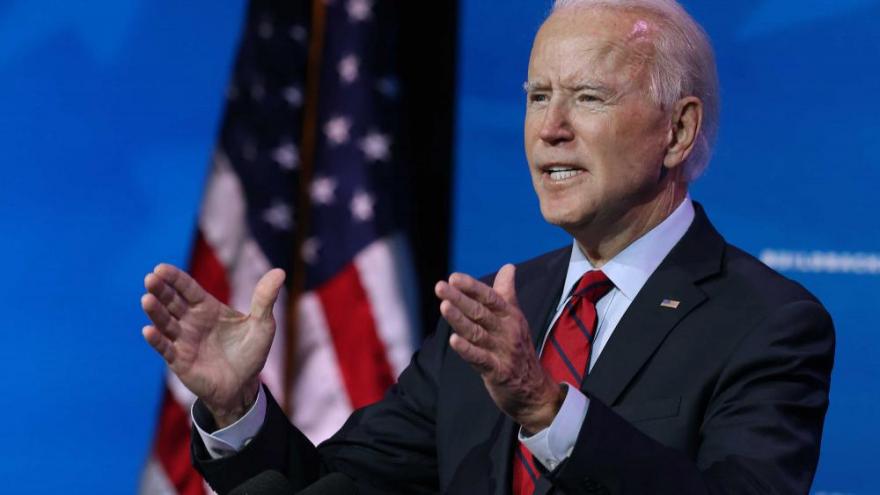 President-elect Joe Biden, here speaking at the Queen Theater on December 08, 2020 in Wilmington, Delaware, expressed skepticism onTuesday about his powers to implement his agenda by executive action.

(CNN) -- President-elect Joe Biden expressed skepticism about his powers to implement his agenda by executive action Tuesday in a private virtual meeting with civil rights leaders, according to a recording reported Thursday by The Intercept.

Biden told a group of seven leaders of civil rights organizations that some progressive Democrats are urging executive actions that are "way beyond the bounds" of a president's legal authority. The comments reflect what Biden has said publicly about the limited scope of executive action and the need for presidents to work with Congress to enact long-lasting policy.

In the meeting, Biden said he planned to roll back everything President Donald Trump has done through executive action, rather than with the approval of Congress. He said he would use his powers "to undo every single damn thing this guy has done by executive authority."

"I am not going to violate the Constitution. Executive authority that my progressive friends talk about is way beyond the bounds," he said.

But, he said, he would not seek to use executive action to mandate policy changes that he has long said are up to Congress to make.

Biden cited gun control as an example, saying that if he signed an executive order banning assault weapons, a future Republican president could undo that ban and use it as a precedent to drastically expand gun rights.

"We do that, next guy comes along and says, 'Well, guess what? By executive order, I guess everybody can have machine guns again,' " he said. "So we gotta be careful."

Audio of the call, obtained by The Intercept's Ryan Grim, was included in the publication's "Deconstructed" podcast Thursday, and at further length in a report on the progressive outlet's website.

Asked about the audio obtained by The Intercept, a Biden transition official said: "President-elect Biden is the same person behind closed doors that he is in public; honest, direct and realistic about the challenges facing our nation the day he is sworn in. The remarks shared in the meeting reflect the same positions he has taken publicly on executive orders and like his predecessors he has the same levers of power to address immediate policy issues within the grounds of the Constitution."

Biden's comments came as he continues to build out his Cabinet and piece together his early agenda. He'll enter office with a narrow House majority, but the Senate is still undecided. Democrats need to win both runoffs in Georgia on January 5 to take control of the chamber; otherwise, Republicans would remain in power.

He faces a tumultuous moment, with Trump refusing to concede the election that he lost, many Republicans refusing to even acknowledge Biden's victory and fractures within the Democratic Party coming into view, as progressives push Biden to pursue a bold agenda.

NAACP President Derrick Johnson warned Biden on the call that selecting Vilsack would anger Black farmers in Georgia. He pointed to Vilsack's 2010 firing of Shirley Sherrod, then the Georgia state director of rural development for the Department of Agriculture, after the right-wing website Breitbart publicized parts of a speech she had given that were later revealed to be out of context.

Johnson told Biden that Sherrod is a hero to Black voters in Georgia.

"Former Secretary Vilsack could have a disastrous impact on voters in Georgia. Shirley Sherrod is a civil rights legend, a hero," Johnson said in the meeting.

But Biden dismissed Johnson's comment about Vilsack, The Intercept reported. He also said the topic of police reform should be avoided -- blaming the "defund the police" slogan adopted by some progressives for down-ballot Democratic losses in the 2020 election.

"I also don't think we should get too far ahead ourselves on dealing with police reform in that, because they've already labeled us as being 'defund the police' anything we put forward in terms of the organizational structure to change policing -- which I promise you, will occur. Promise you," Biden said.