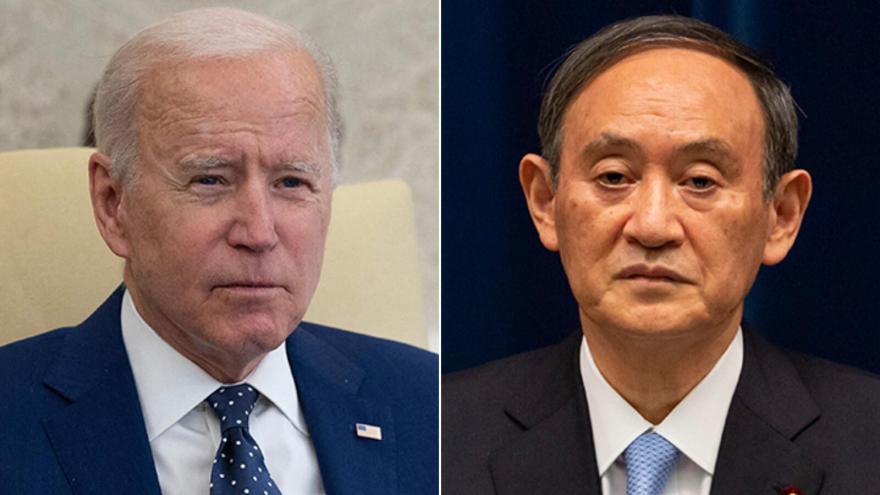 President Joe Biden plans to use his meeting with Prime Minister of Japan Yoshihide Suga on Friday to send a signal to China that the countries are united in their opposition to recent aggression against Taiwan as the US seeks to refocus its foreign policy in East Asia.

(CNN) -- President Joe Biden hosted Prime Minister Yoshihide Suga at the White House on Friday for his first in-person meeting with a foreign leader as he refocuses American foreign policy toward East Asia.

The meeting between the two leaders came at the end of a pivotal week for the Biden administration's foreign policy, marked by Wednesday's announcement that the President will remove US troops from Afghanistan by September 11 and Thursday's announcement of sanctions on Russia for election interference and cyber attacks. Those moves are a part of the President's desire to shift the country's foreign policy focus to East Asia and counter a rising China.

Biden and Suga said they both aimed to tighten the relationship between the two countries during the daylong visit, and China was one of the biggest focuses of the day's meetings.

"We committed to working together to take on the challenges from China and on issues like the East China Sea, the South China Sea, as well as North Korea, to ensure the future of a free and open Indo-Pacific," Biden said during remarks in the Rose Garden of the White House on Friday.

Suga said he and Biden had "serious talks on China's influence over the peace and prosperity of the Indo-Pacific, and the world at large."

"We agreed to oppose any attempts to change the status quo by force or coercion in the East and South China Seas and intimidation of others in the region," Suga said. "At the same time, we agreed on the necessity for each of us to engage in frank dialogue with China, and in so doing, to pursue stability of international relations, while upholding universal values."

China sent 25 warplanes into Taiwan's air defense identification zone on Monday, which was the largest breach of that space since the island began regularly reporting such activity in September, Taiwan's Defense Ministry said.

The fact that Suga was the first foreign leader to pay a visit to the White House showed the importance of the relationship between the two countries in promoting democracy in the region, Biden said earlier in the day.

"As you know, this is the first foreign leader to visit me in my presidency and I'm really pleased to welcome such a close ally and good partner," Biden said during a bilateral meeting in the State Dining Room at the White House.

Suga opened his remarks at that meeting by acknowledging the shooting in Indianapolis that left eight people dead overnight, saying through a translator that "innocent citizens must not be exposed to any such violence."

The Prime Minister said the two countries have a bond over their shared values and he was looking to "reaffirm the new and tight bond between us."

"I wish to spend time with you to, again, confirm the close ties between our two countries. And thank you again for accepting us," Suga said.

During the news conference later in the afternoon, Biden mentioned partnerships with Japan on technology, making sure the technologies are shared and set by democracies, not autocracies, in a nod to China.

"We're going to work together to prove that democracies can still compete and win in the 21st Century," he said.

Suga said during the news conference that the two leaders discussed issues related to Taiwan and Xinjiang during their meetings.

"As we engaged in an exchange of views over the regional situation, we also discussed the circumstances in Taiwan and Xinjiang Uygur Autonomous Region as well," the Prime Minister said, according to a live translation.

"I refrain from mentioning details since it pertains to diplomatic exchanges, but there is already an agreed recognition over the importance of peace and stability of the Taiwan strait between Japan and the United States, which was reaffirmed on this occasion. I also explained Japan's position and initiatives regarding the situation in Xinjiang Uygur Autonomous Region to the President, who I think understood my points," he added.

The two leaders also discussed North Korea, as the US is nearing the conclusion of its North Korea policy review.

While Japan has been consulted throughout the process, the two leaders had an opportunity to "put the finishing touches on what is an important initiative for the United States," a senior official said ahead of the meeting.

"The United States can only be effective in Asia when the US-Japan relationship is strong and Japan is steady and stable," the official said.

This story and its headline have been updated with further developments Friday.