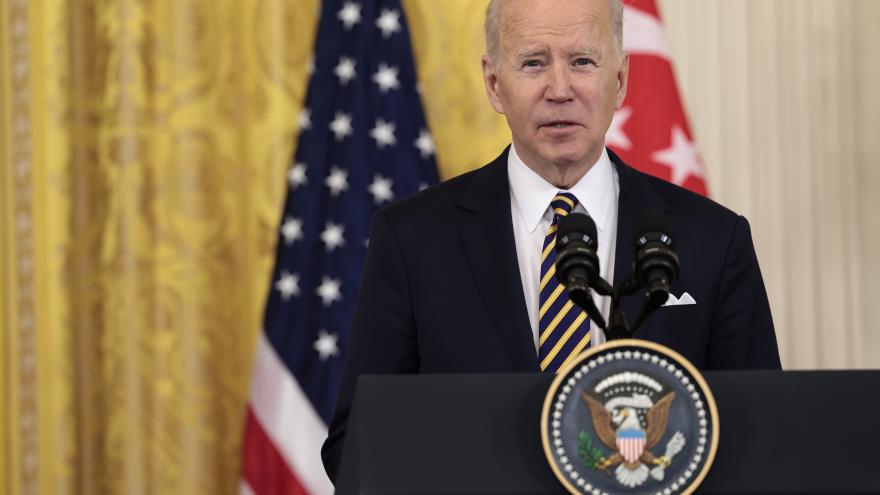 (CNN) -- President Joe Biden will urge lawmakers to secure more funding for his administration's Covid-19 response in a speech from the White House Wednesday afternoon and will warn the progress the nation has made in combating the pandemic is "at severe risk if they fail to act," a White House official tells CNN.

The direct plea from the President comes as the White House ramps up its warnings that aspects of the federal Covid-19 response -- including programs that provide resources for vaccinations, reimburse providers and insurers for out-of-network treatment, underwrite Covid testing and supply personal protective equipment -- will be curtailed because of insufficient funds.

The President on Wednesday will also announce the rollout of COVID.gov, a new website aimed at helping Americans locate and access vaccines, tests, treatments and masks, the official said.

Biden will highlight his administration's new Test-to-Treat initiative, which provides Americans with free antiviral medicine for Covid-19 if they test positive for Covid-19 at one of the designated locations. Americans will be able to locate the pharmacies and community health centers participating in the initiative through the new government website. The White House says the initiative has so far expanded to more than 2,000 locations across the nation.

The speech comes as the administration has spent much of the past month warning the lack of Covid funding could harm the federal government's response to the pandemic going forward.

According to an administration official, the White House has secured funding to vaccinate children under 5 years old and offer a fourth booster shot to the immunocompromised. Beyond that, however, any other measures would require additional approval from Congress.

Republican lawmakers have said they'll oppose additional funding to fight the pandemic without guaranteed offsets, a demand one senior administration official told reporters was disingenuous, given previous votes to secure emergency funding under the Trump administration that did not have earmarked offset funding.

But the White House is warning lawmakers that, absent more relief funds, there won't be sufficient money to subsidize a number of Covid mitigation steps, including programs that provide resources for vaccinations, reimburse providers and insurers for out-of-network treatment, underwrite Covid testing and supply personal protective equipment.

"We do have sufficient current inventory of vaccines, both at states and pharmacies and other access points around the country and in our central inventory for fourth doses if they're called for this spring for our most vulnerable, including seniors," White House Covid-19 response coordinator Jeff Zients said in response to a question from CNN during Wednesday's briefing.

"Where we do not have sufficient doses is later in the year if the science dictates that all Americans should get a booster, or if there's a need for a new formulation of the vaccine, a variant-specific vaccine, for example, then we will not have sufficient supply," Zients added, calling the situation "completely unacceptable."

On Tuesday, the US Food and Drug administration expanded the emergency use authorization of the Pfizer and Moderna Covid-19 vaccines to allow adults ages 50 and older to get a second booster as early as four months after their first booster dose of any Covid-19 vaccine. The US Centers for Disease Control and Prevention added that adults who got Johnson & Johnson's vaccine as their primary and first booster shots at least four months prior may now get an additional booster of Pfizer/BioNTech or Moderna's vaccines.

The move extends the availability of additional boosters to healthy older adults. The FDA had previously allowed second booster shots for anyone 12 years of age or older who was severely immune deficient, starting four months after their first booster.

The CDC released what's known as a permissive recommendation -- a statement that the shots may be used in this age group for those who want them. The agency is not expected to officially recommend the shots, however.

The update from the President comes as the White House argues the nation has entered a new chapter in its pandemic response and that Americans are returning to their normal routines.

Earlier this month, the White House unveiled a plan to move the nation to a new stage of the pandemic where Covid-19 "does not disrupt our daily lives," while also preparing the nation for any new variants that may emerge.

But funding from Congress is key to moving into that new stage, White House officials stress.

"We are out of money," Zients told CNN on Tuesday. Zients said there would be "immediate consequences" if no additional funds were provided.

The President's National Covid-19 Preparedness Plan, which requires new funding, is focused on spending on treatments for Covid-19, preparing for new variants, keeping schools and businesses open and continuing the effort to vaccinate the nation and the world.

A major part of the new plan is the new Test to Treat initiative the President will discuss on Wednesday. The federal government has ordered 20 million treatment courses of Pfizer's antiviral pill, Paxlovid, which has been shown to significantly reduce hospitalizations and severe illness. It was authorized by the US Food and Drug Administration last year.