Biden to travel to New York, Pennsylvania, and Virginia to mark 20th anniversary of the 9/11 terrorist attacks 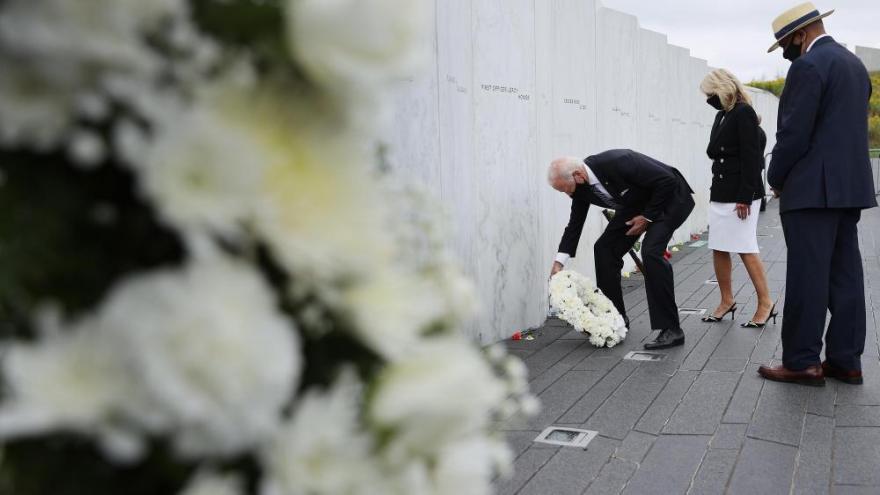 Then-Democratic presidential nominee and former Vice President Joe Biden and Dr. Jill Biden are accompanied by Calvin Wilson as they lay a wreath at the Flight 93 National Memorial on the 19th anniversary of the 9/11 terror attacks September 11, 2020 in Shanksville, Pennsylvania.

(CNN) -- President Joe Biden and first lady Jill Biden will travel to all three sites of the 9/11 terrorist attacks next Saturday, marking the 20th anniversary of the deadly day, the White House said in a statement Saturday.

The President and first lady will visit New York City, Shanksville, Pennsylvania, and the Pentagon in Arlington, Virginia.

Vice President Kamala Harris and second gentleman Doug Emhoff will travel to Shanksville, the site of the United Flight 93 crash, for a separate event, before joining the President and first lady at the Pentagon.

Last year, Biden visited the 9/11 memorial in New York before visiting the memorial in Shanksville.

The White House has not said yet if Biden will make remarks.

Former President George W. Bush and former first lady Laura Bush will also travel to Shanksville. The George W. Bush Presidential Center announced the 43rd President would deliver keynote remarks in a ceremony open to the families of those killed on United Flight 93 and invited guests.