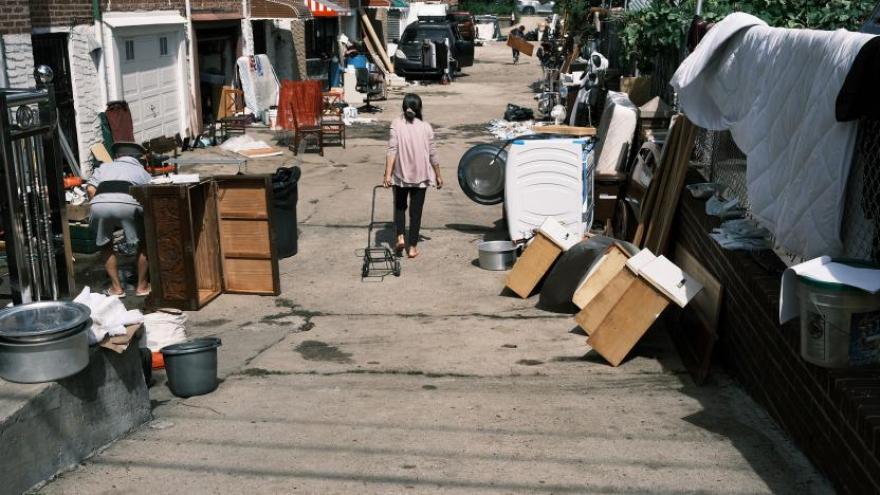 People clean up their flooded homes in a Queens neighborhood that saw massive flooding and numerous deaths following a night of heavy wind and rain from the remnants of Hurricane Ida on September 3.

(CNN) -- President Joe Biden will travel to New Jersey and New York next week to survey widespread storm damage caused by the remnants of Hurricane Ida, according to the White House.

It will be Biden's second trip to survey damage from the storm after visiting Louisiana on Friday.

The President's visit to New Jersey and New York comes after extreme flooding left more than 40 people dead, including at least 23 people in New Jersey alone.

Dozens have died in six Eastern states -- Connecticut, Maryland, New Jersey, New York, Pennsylvania and Virginia -- after the storm brought unprecedented rainfall to some areas. And at least 13 people were killed in Louisiana and Mississippi after the storm first made landfall on August 29.

The death toll included a state trooper in Connecticut who was swept away as he responded to a missing person's call.

"There's a lot of damage, and I made clear to the governors that my team at ... FEMA (the Federal Emergency Management Agency) is on the ground and ready to provide all the assistance that is needed," President Joe Biden said last week of the situation in the Northeast following the storm.

The visit to the region also comes as state and local leaders are sounding an urgent alarm on climate change and calling for action on infrastructure legislation so states can be better prepared for extreme weather events in the future.

"We haven't experienced this before, but we should expect it the next time, and that means we have to continue investments in infrastructure, working in partnership with our federal government, and support from Senator Schumer and President Biden," New York Gov. Kathy Hochul said.

The rainfall from Ida broke a record in New York City that had been set just one week earlier, something Mayor Bill de Blasio said is "the biggest wakeup call we could possibly get."

The President said the severity of extreme weather events are yet another reason Congress should act on his "Build Back Better" agenda during remarks in Louisiana on Friday.

"Things have changed so drastically in terms of the environment. We've already crossed certain thresholds. We can't build back roads, highways, bridges, anything to what it was before. We gotta build back to what it is now, what's needed now," Biden said.

"And I know the heads of the energy companies understand this really well. We have a significant piece of legislation, both the infrastructure bill and a budget thing, a reconciliation bill, that calls for significant investment in being able to deal with what is about to come."

Hundreds of thousands still without power in Louisiana

As of Saturday morning, more than 700,000 homes and businesses in Louisiana were without power, according to PowerOutage.US.

And high temperatures will be in the high 80s or low 90s in southeast Louisiana and southern Mississippi on Saturday, with the heat index -- what the temperature feels like with humidity and other factors -- generally in the mid-90s, the forecasters said.