Biden to travel to Kentucky to survey storm damage on Wednesday 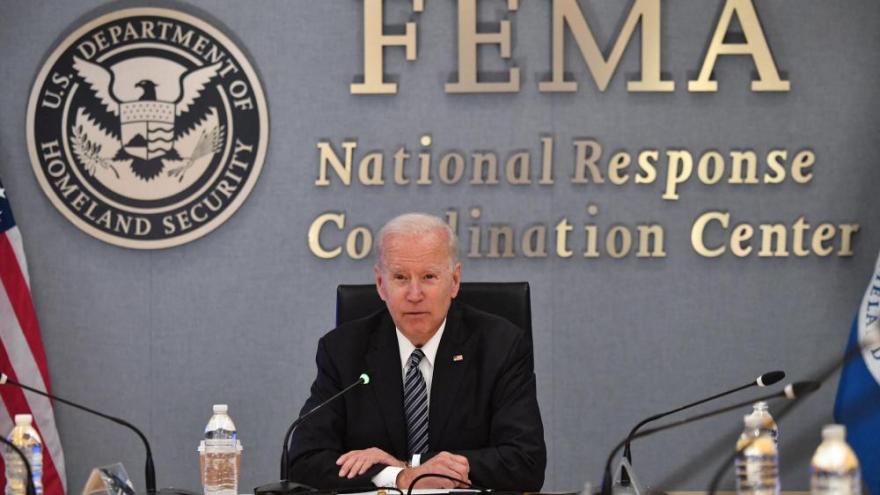 President Joe Biden, pictured here, on May 24, in Washington, DC., announced he will travel to Kentucky later on this week to survey damage from tornadoes and severe storms.

(CNN) -- President Joe Biden on Monday announced he will travel to Kentucky later on this week to survey damage from tornadoes and severe storms.

"I intend to travel to Kentucky on Wednesday. And with each passing day, the human impact of this devastation -- just the depths of the losses -- are becoming more and more apparent," Biden told reporters on Monday during an Oval Office briefing on the storm with homeland security officials.

The President said he is working with Kentucky Gov. Andy Beshear to make sure he is not in the way of recovery efforts.

Biden added that the administration will work to set up federal disaster centers and will be working alongside state governments and nonprofit organizations in the storms' aftermath.

"We're gonna get this done. We're gonna be there as long as it takes to help. And the combination of state, federal, and volunteer organizations do everything from helping clearing the debris but provide the necessary means to move, get schools reopened, making sure that homes are going to be rebuilt, etc. So there's a lot, a lot, that needs to be done," Biden said.

The White House said Biden will travel to Ft. Campbell, Kentucky, for a storm briefing, and to Mayfield and Dawson Springs to survey storm damage.

Biden has been regularly briefed on the storms and has spoken with Beshear multiple times since the storms.

He approved a major disaster declaration in Kentucky overnight and said he would be signing an additional emergency request for Illinois at the governor's request. On Monday, Homeland Security Secretary Alejandro Mayorkas, Federal Emergency Management Administration Administrator Deanne Criswell, and others briefed him on the situation on the ground and how the federal government can accelerate and expand federal assistance.

Beshear announced on Monday that in the wake of disaster, there have been 64 deaths and 105 individuals remain unaccounted for.

"Undoubtedly, there will be more. We believe it will certainly be above 70, maybe even 80," Beshear said, adding it may be at least a week before officials have a final count.

Some 28,531 customers in Kentucky remain without power, according to the Kentucky Division of Emergency Management.

Asked on Monday what he was most worried about in recovery efforts, Biden said he was most concerned about "peace of mind" for those impacted.

"It's just devastating, and so I worry, quite frankly, about the mental health of these people. You come home and you see that, and if you haven't -- if you've lost someone in the meantime. Thank God, it doesn't seem like the numbers are quite as high as anticipated, but they're high. ... And what do you do? Where do you go?" he said.

He added, "That's what worries me most, the uncertainty. ... So, we just want them to know that we're going to stay as long as it takes."

In addition to urgent recovery efforts and food and water distribution, Biden said he would be asking his team to set up sites for booster shots and other public health efforts as Covid-19 cases rise across the country.

She specifically highlighted that FEMA has deployed urban search and rescue teams, management assistant teams and mobile communication operations vehicles as well as delivered dozens of generators, 30,000 meals, 90,000 bottles of water, 4500 blankets, 2100 cots and "other critical commodities to Kentucky to help families in need."