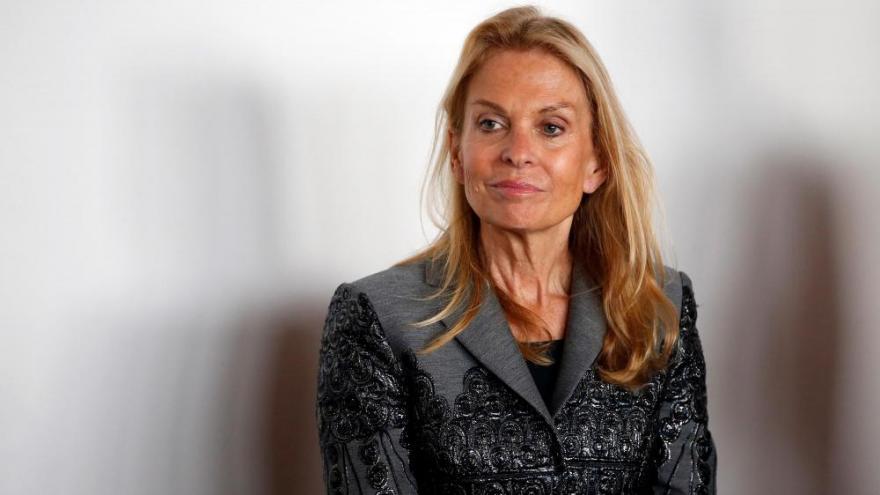 Jane Hartley attends a ceremony in Paris, France, September 24, 2015. President Joe Biden will name Jane Hartley as his ambassador to the United Kingdom after a lengthy search, a person familiar with the decision told CNN.

(CNN) -- President Joe Biden will name Jane Hartley as his ambassador to the United Kingdom after a lengthy search, a person familiar with the decision told CNN.

Hartley, the former US ambassador to France, has not been officially named as Biden's choice for ambassador to the Court of St. James, but the decision has been made internally, the source said. Biden has spent months searching for a candidate to fill the prestigious role, a process that has been the subject of considerable discussion on both sides of the Atlantic.

At least two candidates turned it down, including former New York Mayor Michael Bloomberg, for unstated reasons, according to a separate person.

Hartley was a major fundraiser for former President Barack Obama, and to a lesser extent for Biden. Her tenure in Paris coincided with a major terrorist attack in the French capital in 2015, during which she coordinated extensively with Washington to manage diplomatic assistance.

After the attack, Obama drew widespread criticism for not attending a peace march in Paris that drew other major world leaders, including of the United Kingdom and Germany. He sent Hartley instead, widely viewed as a poor substitute for himself or Biden. The White House later admitted it was a mistake.

"It's fair to say that we should have sent someone with a higher profile to be there," then-press secretary Josh Earnest said.

The Biden administration has started notifying countries of the President's choices, officials said, which is one of the final steps before the ambassador nominations are formally made. The nomination must be confirmed by the US Senate.

A White House spokesperson said they have nothing to confirm at the moment and nothing is final until the pick is announced.

The Washington Post first reported Hartley as the selection.

Biden has expressed his distaste for Brexit since his time as Obama's vice president.

Now, five years after the vote that kicked off the UK's separation from the European Union, the Biden administration is adapting to the country's changing landscape.

UK Prime Minister Boris Johnson and Biden had successful meetings last month during the G7 summit. But the administration has also indicated that Northern Ireland's role in the UK's Brexit agreement with the European Union is a key issue for Biden.

Biden has been slow to nominate diplomats, going months before nominating his first ambassador to serve overseas.

The timing of ambassador nominations was not seen as an urgent matter to address earlier in the administration, with the coronavirus pandemic taking precedent. Some six months into the Biden administration, a slew of key ambassadorships remain vacant.

The nomination comes as both the US and the UK are enduring a rise in Covid-19 cases, contributed in part to the highly transmissible Delta variant.

While the UK requires American citizens to quarantine and test negative for Covid-19 before entering their country, the US still largely bars travelers from the UK.

Johnson and Biden established a task force last month to evaluate options to open up travel between their two countries.